The Muskegon Lumberjacks have added another experienced person to their front office staff.

Patrick Day, who spent the last six seasons as the general manager of the Lansing Lugnuts of the Midwest Baseball League will join the front office as the Chief Operating Officer. Day will begin his duties July 9. 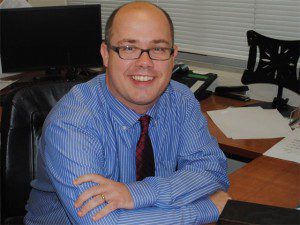 The Lugnuts are the Class A affiliate of MLB’s Toronto Blue Jays.

“I believe the addition of Pat, along with Tim Taylor, will help our franchise reach the level of excellence that we are committed to achieving,” Lumberjack owner Josh Mervis said. “Pat’s experience and past successes have uniquely prepared him to help lead our program.

“The hiring of Pat is just another sign of the long-term commitment that we have for our program here in Muskegon,” Mervis said. “We intend to make an impact on and off the ice, bringing value to our fans, corporate partners, and the community as a whole.”

Day arrived in Lansing in 2007 and was instrumental in the Lugnuts consistently being ranked among the leaders in attendance for minor-league baseball.

“I am excited to join the Lumberjacks,” Day said. “I look forward to bringing my 13 years of professional sports experience to continue to grow the business. I want to ensure the Lumberjacks are the preeminent affordable family option in the Muskegon area for years to come.”

Day’s career began with the Charleston Alley Cats in West Virginia. There, he oversaw the ticket revenue steams as the assistant general manager of the Class A club in the South Atlantic League. He moved to the Montgomery Biscuits in Mississippi. Twice during his stint there, the Southern League club was named Baseball American’s Class AA franchise of the year.

“The entire Lumberjacks staff did a wonderful job last season,” Day said. “The investment Josh Mervis has put into L.C. Walker Arena is incredible and I look forward to making sure the entire community, including families, youth teams, churches and schools, know what a great atmosphere it is for them to bond and create memories.”

Day is originally from Massachusetts. He earned his Bachelor of Arts degree in mass communications from Concord University in West Virginia.

Day is married to Erica and they have a 14-month-old daughter named Emerson.