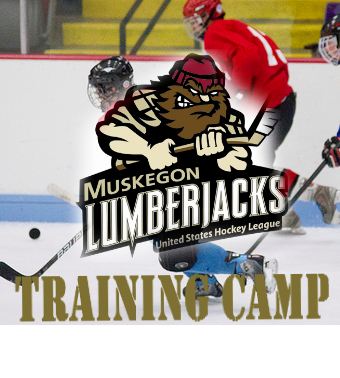 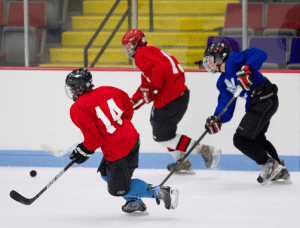 The skill and speed of the Muskegon Lumberjacks’ training camp increased greatly Wednesday with the start of the USHL club’s Main Camp.

A total of 18 players from the team’s Invite Camp were asked to stick around for the four-day Main Camp.

“I saw a lot of guys and I saw kids who were in a camp for the first time,” Lumberjacks’ coach Jim McKenzie said. “It was a great effort.”

That was Monday and Tuesday.

But now it’s Wednesday and the pace was much faster and more furious.

The coaches and staff want to see who can play the game, who has the skills and who came into camp in good enough physical condition to make it through to Saturday’s all-star games.

Six teams skated Wednesday afternoon and evening. On Thursday, the team will play two games each before the coaching staff trims the roster down to four teams.

After Friday, that number will be trimmed again, this time to a maximum of 40.

On Saturday, those players will compete in two all-star games, at 10 a.m. and 7 p.m.

“They are close to the finish line,” McKenzie said. “Each day it will get more intense.”

* It’s not just a matter of picking the best players in the camp to make up the Jacks’ roster for the 2012-13 season. The Jacks are limited by league rules to keep only a certain number of players from each birth year.

And that’s just one consideration.

“It’s how old and what position they play,” McKenzie said.

* There also is an international flavor to the game with players from Slovakia, Sweden, Germany, Russia and Canada.

* There is no entry charge for Saturday’s all-star games.