What a pleasure it was to chat with former Detroit Tiger outfielder Charlie “Paw Paw” Maxwell last week. 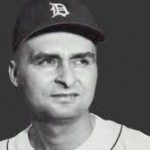 After graduating Lawton High School, where he starred in baseball and basketball, he went on to Western Michigan University.

While at WMU, he was noticed by a scout from the Boston Red Sox, drafted and he was off to the Red Sox organization, or so he thought.

It was the 1940s, and before he could report to the Red Sox, he also found he was chosen by another organization ‑ the United States Army. He, along with countless others of his generation, had their lives and ambitions put on hold to serve a higher calling.

The call of freedom during World War II. .For many, the cost of that freedom was the ultimate sacrifice – their lives.

Following the war, Maxwell returned eager to see if the Red Sox would still honor their pledge to give him a chance. To his relief, was given a tryout. He made the team, but Maxwell still had a rather sizable problem..

Maxwell was an outfielder and he soon learned that he would have to battle for the back-up leftfield job because future Hall of Famer Ted Williams stood in his way.

Maxwell made the most of his predicament. He would split time with the Red Sox and their top farm teams for several years. Despite that fact, Maxwell knew he wasn’t going to displace the legendary Williams and decided to learn make the best of it by learning all he could from the legendary player.

Not only about hitting but also fielding. It was no easy chore to play leftfield in front of the “Big Green” monster at Fenway Park.

“Ted could play that wall better than anybody I ever saw,” Maxwell said. “Most people made the mistake of chasing a fly ball all the way to the wall, only to have it slam off the wall and ricochet around the outfield like a pinball. Ted knew just where the ball was going to go after it hit certain parts of that wall. He was great.”

Maxwell also would count it a blessing that he spent some time in the Red Sox minor leagues .It was at one of those stops he met the girl who would become his life partner. They have been married 62 years..

Several years later, he was dealt to Baltimore. However he and Orioles’ manager Paul Richards did not see eye-to-eye, and after the 1954 season, he was traded to the Detroit Tigers..

“That was a big boost for me,” Maxwell saidl. “I was going to a team close to home and I had a chance to play everyday.”

In 1955 at the age of 28, Maxwell became the every day leftfielder for the Tigers. He was dubbed “Ole Paw Paw” by Van Patrick, who broadcasted the Tigers games on TV and radio.

Maxwell was rejuvenated at Briggs Stadium as it was known in the 1950s. He led the American League for outfielders in fielding in 1957 and 1959. He was a fan favorite,  especially with the kids who would show up early for Saturday games.

In the 1950s, before Saturday games, the Tigers would allow kids who came to the game early to come on the field and the players and coaches would put on a clinic.

Maxwell, being the slick fielder, he would draw the biggest group of kids. He would laugh and tease with the youngsters and make trick catches while a teammate hit him fly balls. This was with the kids, but with Tiger manager Steve O’Neil.

“Man, would he get mad at me,” Maxwell said. “He thought I was showing up the other team. I’d say, ‘hey skip, lighten up, I’m just having fun with the kids.”

Charlie also would become a favorite of the “big kids” as well. He had a knack of having great games on Sundays.

In 1959, he hit 31 home runs and half of those were on Sundays. One Sunday during a doubleheader, Maxwell hit four consecutive home runs.

The leftfield curse would arise again for Maxwell when the Tigers traded for slugging leftfielder Rocky Colavito. Maxwell packed his bags after being traded to the Chicago White Sox.

He would play for the Sox from 1962 until his retirement in 1964. Despite an obvious love for the game, he never considered going into coaching..

“There was not enough money and the time I would have to spend away from home wasn’t worth it,” Maxwell said. “It was time for me to put my family first after all those years that they allowed me to do what I wanted.”

Maxwell settled down back home in Lawton and worked as an engineer until his retirement..

He can only shake his head at the money that surrounds his game now..

“The guys today make more in meal money than we made in a season.” Maxwell said with a chuckle. “Don’t get me wrong. If they can get it, more power to them.”

When Maxwell played, players were on a one-year contract. And there were no agents to represent them. They dealt one-on-one with the owner, who knew he had the final say.

It was the days before free agency, the reserve clause and other multi-million dollar words. Maxwell saw  that day coming.

“I was the player rep with the White Sox and we used to tell the owners that they had better get their house in order because the day was going to come that they were going to have to deal with a lot of costly issues.” Maxwell said. “Eventually, the reserve clause was challenged and the players union won and what a bucket of worms that opened.”

Maxwell’s story harkens back to a slower, more innocent time. It was when sports were a pleasant diversion from the hustle and bustle of daily lives. The players of his day had to have off-season jobs. Spring training was truly a time to get back into playing shape..

Today, sports have become a business that no longer seems to be the care free diversion it was years ago. We used to be concerned with hits, doubles, home runs.

Now we’re concerned with length of contracts, who is in trouble now and who players are hanging out with off the field.

Maxwell made us believe there was still magic that we could capture in a bottle you put under your pillow at night and dream of endless summers..

Fruitport opens its volleyball season with a loss against T.C. West