Memories of Moyes: Muskegon area has been blessed with some fantastic football games over the years 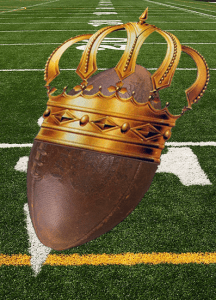 He wanted his fellow contributors to this desperately needed website to list their top football games witnessed over the years.

I have to put my thinking cap on and go off the top of my head to recall a few of my most thrilling encounters of King Football in our area.  I am currently baking in the sultry heat down here in the Sunshine State and have no access to any of the old clippings.

Here’s hoping this septuagenarian’s recollections are mostly accurate as I give you my top picks accompanied by a thumbnail sketch of each memorable contest.

During my more than 50 years working for the media, first as a cub reporter for the ‘daily’ Muskegon Chronicle back in 1956, and the many years as a play-by-play announcer on the radio, I have been fortunate to have witnessed more than my share of ‘cliffhangers.’

To say that one game topped them all would be impossible so lets begin with my games that tie for first place:

1971:  Muskegon 20, Traverse City 18:  Has it really been more than 40 years since this Class A ‘mythical state championship’ game was played?  In the ensuing 41 years, there has never been a game played in Muskegon County that topped the attendance for this game.  It was No. 1 vs. No. 2 in the state during Week 7 in the pre-playoff era. This game lived up to its billing.

After Traverse City took a lead into halftime, the big play of the game was decided on a punt, albeit a short punt.  Larry Sahosky picked off the short Trojan punt as the overanxious TC coverage team went sailing past, expecting the punt to travel a much farther distance.  A surprised Sahosky caught the pigskin and rambled, untouched, deep into Traverse City territory. That set up the deciding touchdown in the victory.  Two weeks later. the Big Reds were unanimously crowned the Class A state champs.

1985:  Traverse City 22, Muskegon 21:  The same two teams, but this time it was Traverse City that pulled a miracle out of its hat with a stunning last play of the game touchdown.

With less than a minute to go in the final quarter, Muskegon’s Donald Banks stepped in front of Traverse City receiver Joe Durocher and raced more than 90 yards for an apparent game-winning touchdown.

Traverse City returned the ensuing kick off back to close its own 40-yard line and there was only time for one last desperation play.  Trojan quarterback Chris Hathaway’s pass to Durocher about 10 yards downfield was complete.

As the Big Red secondary was ready to pounce on Durocher for the kill, the senior receiver calmly flipped the ball back to Tim Lautner on a set play, and the once deafening packed house at historic Hackley Stadium was eerily silent, futilely watching Lautner running untouched into the end zone.  Surely legendary Trojan coach Jim Ooley would go for the conservative point after from placement to send the game into overtime.

But no, the crafty Ooley went for the two pointer and Hathaway, this time, completed the same pass play to Durocher that just moments earlier had been returned by Banks for the TD.  Traverse would then go on to win their second Class A state title.

1992:  Reeths Puffer 21, Walled Lake Central 18: I will cover this game more thoroughly in a future Moyes’ Memories story this fall, but this was another dandy with another joyous ending for Muskegon prep fans.

The Rockets, coming off a shocking semifinal upset the previous week over heavily favored East Lansing, were less than sharp for about 47 of the 48 minutes of this state Class A championship game at the Pontiac Silverdome.

The Rockets had given up the football five times on turnovers and needed a last-second ‘Hail Mary’ if they were to win their first, and only, state football title.  Hall of Fame coach Pete Kutches called for a gadget play that perhaps fooled nobody.

Rocket quarterback Jeff Zietlow took the ball from center and, after seemingly about a half-dozen laterals, Zietlow ultimately ended up with the ball.

The Rocket quarterback stepped back and unloaded a heave downfield as far as he could throw in the general direction of Rocket end John Boersma.

Shockingly enough, Boersma was drawing just single coverage.  The pass was deflected by the Walled Lake defense, but standing in the right place at the right time was Rocket backfield ace Stacy Starr.

Starr was more than happy to catch this deflected pass and he rambled into the end zone with just seconds left on the clock as the Rocket fans, (and my broadcasting sidekick Gene Young) went berserk.

2008:  Muskegon 38, Davison 35: Certainly no top listing would be complete without mention of this classic in the Division 2 state semifinals.  I doubt if I will ever see another comeback in my lifetime to match the implausible ending to this thriller.

Former Big Red coach, and now current head coach of the Ferris State University Bulldogs, Tony Annese, will never let me forget how I had started to congratulate the Big Reds on an outstanding season when they trailed by about four touchdowns in the final quarter.

I wasn’t the only one who thought the Big Red season was coming to a close. After the Big Reds had pulled off the improbable comeback, I was told by Annese a couple of days later of a moving story from a local minister who had left the game early, thinking that all was lost.

The minister was shocked when, while having dinner on the way home from East Lansing, he was informed by a late-arriving Big Red fan that Muskegon had pulled off the impossible, recovering a couple of onside kicks and escaping with a victory.

The minister ditched his scheduled sermon to his congregation the following morning and gave a moving apology on how he had ‘quit’ on his beloved Big Reds and had learned a valuable lesson.

I really believe that when the Muskegon players had heard the text of this moving sermon, it inspired them the following week. No miracles were needed for the Big Reds as they pummeled Warren DeLaSalle in the finals to win their third state title during the Annese years.

The four above-mentioned games certainly topped my list but, in no particular order, here are some others dandies that I was so privileged to witness during my love affair working local high school sports over the years.

1954: North Muskegon 12, Manistee 12:  North Muskegon was undefeated, time for one last play.  NM’s brilliant running back Stan Guy goes 70 yards for a TD only to have the play nullified by a clipping penalty.  Old time Norse fans (like me) are still wondering ‘where was the clip?’

1950: Muskegon Heights 13, Muskegon 6:  My first Big Red-Heights viewing and it was a classic as I wrote in an earlier Moyes’ Memories story.

1995:  Muskegon Catholic 13, Ravenna 8:  The Mud Bowl!  Ravenna’s punter goes to his knee to field a punt on the quagmire of Citizens Field and Muskegon Catholic nips Ravenna.  MCC then breezes to the Class C state title.

1988: Ravenna 33, St Ignace 20: This semifinal blowout victory over the state’s No. 1 ranked team set the stage for a Bulldog dynasty for many years.

2001: Fruitport 42, East Grand Rapids 30: Over the next decade, East Grand Rapids would lose less than a handful of games.  The Trojans used this win to inspire them all the way to the state championship game before losing to one of this states most powerful all time teams:  Farmington Hills Harrison and future MSU and NFL quarterback Drew Stanton.

And my all time upset:

1980: Muskegon 19, Muskegon Catholic 15:  This scenario likely never happened before or will again:  The Muskegon win would be their only victory of the entire season while the loss proved to be the only defeat incurred by the Crusaders’ 1980 Class B state championship squad.

There have been many other thrillers over the years as I’m sure our very knowledgeable group of fans will bring to my attention.

Jim Moyes is a columnist for Local Sports Journal. He can be reached at [email protected]