Forrest Courtright had a pair of touchdown runs and with 85 yards on 17 carries. Nathan Lents had a 31-yard touchdown reception among his three catches for 60 yards.He rushed six times for 71 yards.

On defense, Shelby was led by Ben Schroeder with 13 tackles, Austin Porter with 12 tackles, Courtright added 10, Casey DeWitt had nine tackles and Tony Guerra had five.

“They gave us a different alignment defensively and we had to make some adjustments at halftime,” said Shelby coach Lorenzo Rodriguez. “They were putting nine to 10 guys in the box and we just had to take advantage of the aerial attack.

“We stuck together as a family, we were all on the same page as best as we could. Also made sure the veer option wasn’t going to take advantage of us,” said Rodriguez. “This gets us on a good start, we need to get off to a fast start. We’re going into the WMC next week and hopefully we’ll improve from here.” 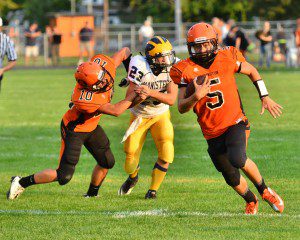 Manistee 36, Ludington 34: At Ludington, for the second year in a row, the Chippewas captured a narrow victory over the Orioles. Last year, Manistee posted a 40-39 victory over Ludington in the season opener.

Quarterback Chad Large directed a late drive that ended up in the end zone, but the two-point conversion failed and Manistee survived. Large finished the game with more than 300 yards passing. He also threw for five touchdowns.

Hesperia 45, White Cloud 0: At White Cloud, Hesperia opened the season in style with a lopsided victory over the host Indians. Hesperia led 14-0 at the half before breaking the game wide open with 31 points in the second half. Cash Bolles topped the 100-yard mark in rushing.

MCC’s iron men: Nate Jones has started every game for three straight years, while Jacob Holt is close behind him