Ageless Les Gowell won his share of games during his 36 years playing baseball at Marsh Field.

Chalk up another “W” for the 56-year-old righthander who can still “bring it,” especially when you consider how many pitches he’s thrown in his long career. 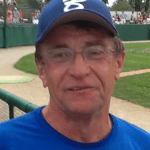 Les Gowell pitched a complete game to lead the Barons.

Gowell pitched a seven-inning complete game and led the Muskegon Barons to a 3-1 victory over Muskegon Bud Light in the first game of the Marsh Field Legends Games. The game was sponsored by the Lakeshore Baseball Club.

Brian Wright claimed he was warmed up and ready to go in case Gowell ran out of gas or hit a rough patch in the Bud Light lineup. Mike Taylor said he was  “No. 5 on the list of pitchers.”

“Yeah, just in case, but only when a certain part of their batting order was coming up,” Gowell said. “Not when  Rick Murray or any of those guys were coming up.”

Gowell didn’t need any help. In fact, he claimed he felt so good he was ready to pitch some more.

“When it’s hot like this, everything is loose,” Gowell said.

Gowell got all the support he needed in the fourth inning when his teammates plated three runs against 65-year-old pitcher Dave Fisher, who was honored before the game for his 50 years of baseball at Marsh Field.

In the top of the fourth inning, Brian Israel reached on an error. One out later, Dick DenHollander singled to left. A wild pitch moved both runners up then Taylor delivered a single to left to make it 1-0. 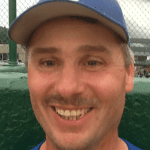 Mike Taylor singled in the first run in the Barons’ victory over Bud Light.

The next hitter, Jim Kelly, ripped a double into the left corner that plated Taylor and DenHollander.

Bud Light pulled to within two runs  in the bottom of the sixth inning after Scott Garzelloni doubled down the left field line and Ryan Hartman singled to left center.

From there, Gowell shut the door.

The Barons finished with nine hits and Bud Light had six. The Barons were led by Bobby  Bryant and Brian Wright with two singles each. Chris Hare had a double for Bud Light.

But another key stat was “zero.”

“Nobody pulled a muscle here,” Gowell said. “We’ve never had that before.”

In the second game, Muskegon defeated Grand Rapids 5-3. The game featured players who were mostly under the age of 45. It also was played in some rain showers.

Marsh Field spokesman Len Piasecki said the opening game was for players more than 45 years old, but there were several “younger” guys in the first game to help fill out the rosters.

There also were several players older than 45 years old in the nightcap.