They were inseparable for life and will be interwoven into North Muskegon football lore forever.

The dynamic duo of Don Bowen and Moe Sikkenga has now passed on into eternity with the death on Thursday of former North Muskegon football sensation Don Bowen. 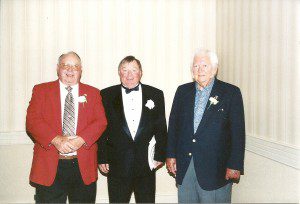 From left, Raymond “Moe” Sikkenga, Jim Moyes and Don Bowen at the 2000 induction ceremony for the Muskegon Area Sports Hall of Fame.

This twosome was the backbone of the North Muskegon football teams of 1941-42, the third local sports team enshrined into the Muskegon Area Sports Hall of Fame back in 2000.

It has been 70 years since they romped all over the gridiron at the home of the Norsemen, but their state record of 15 straight games going undefeated, untied and unscored upon, is a record that has withstood the test of time for seven decades.

Bowen’s passing came less than a year after his best friend and teammate Sikkenga passed away last September.

As was true for many who lived during this turbulent era encompassing World War II, promising college careers, raising a family or even pursuing a job had to take a back seat to the war effort.

Prior to enlisting into a branch of service to serve their country following high school graduation, Bowen and Sikkenga had more than rewarding careers as star athletes on the northside.

Although they dabbled in other sports while enrolled at North Muskegon High, it was in football where these two buddies really excelled.

Bowen was the star tailback and Sikkenga the quarterback during those days when teams primarily used the now practically defunct single wing system.

Sikkenga was not your prototypical quarterback, as he resembled a Sherman tank, unlike today’s tall and lean signal callers who stand upright in the pocket and throw over the defenders.

Bowen possessed the looks of a movie star, combined with the agility and strength of a gymnast. Endeared by his teammates, Bowen was an easy choice to be elected captain of the 1942 Norsemen powerhouse.

Paired together, they were North Muskegon’s early version of Doc Blanchard and Glen Davis.

And naturally, as it was true for many of those old Norsemen, they played on both sides of the line of scrimmage.

Under head coach Lyle McNitt, the 1941 Norsemen team emphasized defense while running off eight straight victories, with nary an opponent crossing the Norse goal line. Captain Bowen was a triple threat star for the Norse, and then some.

In an early season 19-0 whitewashing of Class B foe Reed City, Bowen beat the Coyotes with his passing, running and rock solid defense. Bowen passed for 1 TD and raced 83 yards for another tally to lead the Norse.

In their season ending finale against rival Fremont, Bowen secured the victory using his raw bone power.  Embroiled in a scoreless tussle late in the game with the Packers, McNitt called on Bowen for seven straight carries before he willed his way into the end zone from 1 yard out for the game’s only touchdown to cap off the perfect season.

Outscoring their opponents 107-0 over the course of the eight-game schedule, the Norsemen added an abundance of offensive wrinkles for the 1942 season.

My father, Paul Moyes, was the new coach for the Norse and he quickly realized he had some awesome talent to work with for the upcoming season.

The Norsemen caught on quickly to their new system as exhibited with their season-opening 33-0 rout of Grand Rapids Lee. Bowen quickly gave Norse followers some early thrills by scoring a couple of first-quarter TDs, the latter from 93 yards away.

Don then passed the baton to his buddy Moe, who scored a pair of TDs in the second quarter, one on a never before seen double reverse play from 56 yards out.

The Norse more than doubled their previous years total by amassing 255 points on the campaign, but it was six points that they gave up that ended their record setting streak.

The Blue and Gold cruised to a comfortable 19-0 lead in a rare night game played in Ludington, against Scottville, when Don Bowen limped to the sidelines for a play or two to recover from a leg cramp.  With  Bowen dejectedly looking on, Scottville completed a long desperation pass, in what would have been Bowen’s area of coverage.

The streak ended when the Spartans scored in two plays from 1 yard out.

Their paths took a different turn shortly after graduating from North Muskegon in the spring of 1943.  Bowen quickly enlisted in the Navy where he served in three theaters of war as a coxswain in the Navy, while Sikkenga signed up for the Army, where he was a Tech Sergeant in battle-torn Italy.

When the war mercifully ended, Bowen and Sikkenga teamed up once again to see if they could fulfill their childhood dream and play football at Michigan State College.

Those dreams soured quickly however, when Sikkenga’s father suddenly passed away and he had to leave MSC to help his mother support the family back in his native Twin Lake home.

With his buddy no longer around, Bowen lost the competitive edge and likewise left the Spartan football team to pursue employment.

Or,  its very possible, the war sapped away some of his skills, as it did for many who served during this tumultuous era.

In June of 2000, Bowen, Sikkenga and nearly all of the surviving members of that 1941-42 NMHS team met in downtown Muskegon where the entire team was enshrined into the Muskegon Area Sports Hall of Fame.

For many years following that honor, it always gave me great pride, as the induction banquet’s emcee, to annually acknowledge Don and Moe as representatives of this deserving group.  Only in the past couple of years, when their health had rapidly declined, did they miss this Muskegon sporting event.

After Moe Sikkenga passed away last September, the sons and daughters of Moe made frequent trips to South Bend to visit with their friend Don Bowen whose health had also taken a turn for the worse.

“ We looked upon Don Bowen like he was our uncle, “ said Moe’s daughter-in-law Laura Sikkenga.

When this year’s Norse gridders take the field in a few days, fans and followers of North Muskegon football will surely notice a huge sign located in the north end zone at Fred Jacks Field.  It honors this incredible group of American youngsters from this great generation whose legacy lives on in this tight northside community.

May Don, Moe and the rest of this inspiring Norsemen team always be remembered.  Goodbye Don, and thanks for being a good friend and  a great American.

Jim Moyes can be reached at [email protected]