The Muskegon Lumberjacks are teaming up with Mercy Athletic Performance to help out some of our country’s greatest heroes.

The Jacks will take part in the first Hydro-Worx Underwater Marathon on Sept. 9.

Money raised from the event will benefit the Eagle Fund, which helps wounded soldiers obtain the rehabilitation treatment they need.

Jacks’ players, coaches and other staff members will combine their efforts to complete an underwater marathon of 26.2 miles on a HydroWorx underwater treadmill at the Mercy Campus in Muskegon.

The majority of this charity event is being held in Hershey, Pa. Runners will be linked via video.

The Lumberjacks will actually be running the second heat of the event, beginning at 1:30 p.m. Hockey fans can stop by the Mercy Campus, 1400 Mercy Drive. The Mercy Athletic Performance Center is Lumberjacks’ official training center.

Josh Bennett, the Jacks’ athletic trainer, was made aware of the event during a conference of the National Athletic Trainer’s Association in St. Louis, Mo.

“Once I saw what it was all about, I needed to find a way to get our team involved,” Bennett said. “It just so happened that Mercy had a HydroWorx pool so we were able to organize it.”

The goaol is to raise $2,500 for the Eagle Fund through contributions made online. Fan can donate money, as well as monitor the team’s progress at www.crowdrise.com/MuskegonLumberjacks. The marathon has a goal of raising $100,000 toward getting soldiers back to health.

The underwater treadmill removes about 80 percent of a person’s body weight through water’s natural buoyancy. Running on the apparatus is low impact and comfortable.

For more information on the event, visit www.underwatermarathon.com.

Lumberjacks respond with Game 4 victory over Dubuque, move on to conference finals 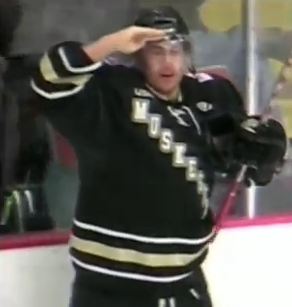