By Mark Lewis
Local Sports JournalRAVENNA – Though it was a sloppy performance throughout, Whitehall’s 28-7 West Michigan Conference victory over host Ravenna proved the Vikings could travel into hostile territory and dominate a league game.”I saw a big improvement in our mentality,” said Whitehall co-head coach Brent Sandee, who shares coaching duties with his brother Cliff. “We made some errors out there, but even if we got out of rhythm, I liked how we’d flip the page and move on to the next play. That’s going to be important as the season goes on.” 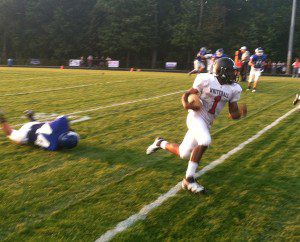 Whitehall’s Antwan Burks runs out of the grasp of Ravenna’s Alex White during the second quarter of Thursday night’s West Michigan Conference showdown between the two teams.

Offensively, the Vikings (2-0, 1-0) – which piled up 355 total yards, including 271 on the ground – primarily relied on the play of senior quarterback Steven Sika and senior running back Antwan Burks, while the nasty attitude and distinct size advantage of the squad’s defensive front proved to be the difference in the victory.

Of the latter, Sandee said defensive coordinator Mark Heb game planned the dominant performance.”Mark’s the best at what he does,” said Sandee. “The kids have bought into what he is saying, and now they’re playing like it. He puts them in the right positions and they make the plays.”Indeed, the Viking defense certainly looked impressive, holding Ravenna to just 129 total yards.For Bulldog head coach David Smith, the loss is part of the process of rebuilding the squad.

“We’re building this team for the future,” said Smith. “We knew coming in we would be going against a pretty good team. I thought, and still think, we can keep up with them. It just got away from us a little bit in the second half.”

Whitehall scored first, as Sika connected with senior Devontae Vance from 40 yards out to cap a two-play drive late in the second quarter.

Ravenna, who looked stuck in the mud up until then, got a boast from senior quarterback Todd Brown, who took the ensuing kick off 95 yards to tie it at 7-7.

“(Brown) is our big weapon,” said Smith, who was tempted to play his quarterback at halfback because of the speed at which he hits the holes. “But he is too dangerous (at QB) for me to move him. The kid can do a lot of things.”

Whitehall answered the Bulldog score with a six play, 59-yard drive. Sika hooked up with twin brother Joe Sika on a a 12-yard TD toss, which the latter pulled in with an impressive finger-tip grab. The extra-point attempt failed due to a bad snap, and the Vikings took the 13-7 led into the half.

Ravenna’s defense kept the hosts in the game through the third quarter, but Whitehall took control early in the fourth, as Steven Sika capped a seven-play drive with a 20-yard TD scamper that, following a successful two-point conversion pass from Sika to Buck Houts, made the score 21-7.

Burks iced it with a four-yard TD blast late in the fourth.

“This was a good, well-coached team,” said Sandee, of the Bulldogs. “The had a game plan to stop the run, and, for the most part, they did that.”

Sika led all passers, going 4-for-5 for 84 yards and two scores. Joe Sika hauled in two passes for 27 yards.

Brown was the Bulldogs’ leading rusher, turning 18 rushes into 85 yards, while also tossing for 16 yards on 5-for-12 passing. Teammate Nicholas Anderson had two catches for 18 yards.

Lumberjacks close road trip with a 5-3 loss to Chicago