Last month, the Local Sports Journal published a 24-page high school football preview section. Here is the preview story on the Fruitport Trojans. If you would like to purchase a copy of the football section, send an email to [email protected]
By Ron Rop
Local Sports Journal
Greg Vargas has the utmost confidence in his Fruitport Trojan football team.
Vargas, a first-year head coach, has been part of some aspect of the program for the last 15 years. He took over for Steve Wilson, who stepped down after 23 years as head coach. 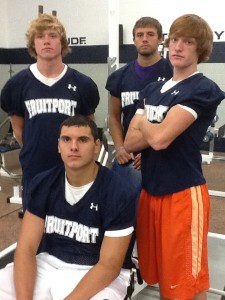 “I feel very well prepared,” Vargas said. “Steve’s leadership and the way he did things was a great example for me, not just in football, but in life.
“I truly feel I had a unique experience working with three potential hall of famers – Steve, Larry Rueger and Steve Horodyski.”
And now it’s time for Vargas to prepare his first team for the battles of the regular season and beyond.
“We have kids who fit well into what we want to do,” Vargas said. “We’ve got some veteran players in the skilled positions and for those who aren’t as experienced, there is a willingness to learn.
“We have a few starters back on each side of the ball,” Vargas said. “We will be learning on the fly, but we do have some good athletes.”
Senior quarterback Tyler Fehler (6-foot, 165) is a dual threat in the Trojan backfield. He has put in the work during the offseason. He passed for about 700 yards last season, which to some schools may not seem like a lot, but this is Fruitport, where “smash mouth” football has been the norm.
The majority of the carries are expected to go to Dakota Gordon (5-foot-8, 150), a senior with good speed. Also in the offensive backfield will be Shawn Knox (5-foot-8, 140), who may be small, but has the quickness to make the first guy miss. Vargas expects to move him around in order to get the ball into his hands.
Receiver Aaron Veihl (5-10, 153) will be a prime target when the Trojans opt to move the ball through the air. Vargas said he’s got good hands and “an innate skill at catching the ball.” Veihl is a senior.
Another key target could be senior Amilio Flores (6-foot-4, 255) who is not only a big target with soft hands, but a solid blocker.
Jacob Breese (6-foot, 187) also will be getting his hands on the ball on occasion. He could play tight end or slotback.
Along the front line is junior Chris Hendricks (6-foot-5, 270), a transfer from Mona Shores High School. The Trojans are expecting major contributions from their newest player.
Another key lineman will be senior guard Alan Jones (6-foot, 190).
Defensively, the Trojans will be led by many of the same players from offense.
Fehler and Knox are defensive backs, Gordon, Breese and Veihl are linebackers and Flores, Hendricks and Jones are defensive linemen.
Other key defenders will be senior defensive back Matt Boroff, who is a hard-working, coachable and an athletic player.
Sophomore Nathan Kriger (6-foot, 165) is an outside linebacker who Vargas calls a “hard working, no nonsense” type of player.
Fruitport will open the season against its traditional rival, Reeths-Puffer.
“We know Spring Lake is a crosstown rival, but we are set on Reeths-Puffer right now,” Vargas said. “In the league, I believe we are a clear-cut favorite.”
Vargas also has the luxury of having a larger than usual roster. Last year, the team had about 35
players. This season, it’s 46.