LSJ preview: Ravenna prepares Brown to take over as quarterback 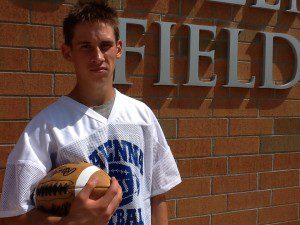 Ravenna groomed senior Todd Brown to take over as quarterback this season. Photo by Ron Rop.

Last month, the Local Sports Journal published a 24-page high school football preview section. Here is the preview story on the Ravenna Bulldogs. If you would like to purchase a copy of the football section, send an email to [email protected]
By Ron Rop
Local Sports Journal
Todd Brown has never taken a snap at quarterback at any level of his football career.
That is about to change for the senior at Ravenna High School.
After spending most of his time taking handoffs, Brown will now be doing the handing off for the young Bulldogs.
His trial by fire began with some meetings with the coaching staff to get ready for his new position.
“I think I’m doing all right,” Brown said. “We’ll be running some options and some other stuff. I’ve been working all summer on it – ever since school got out.”
Ravenna coach David Smith knew he was asking a lot of Brown when he approached him with the idea of changing spots.
“It’s the kid’s senior year, and he’s played tailback every season,” Smith said.
The Bulldog program is known for its workhorse tailbacks over the years.
“He was open to it, he’s a leader on this team and he’s doing a great job,” Smith said. “People will underestimate him as a thrower.”
Last year, Brown was taking handoffs from Zach Courtade. This season, Brown will be handing off to sophomore Gabe Zimmer, who is expected to turn heads throughout his career at Ravenna.
“We’re going to be fast this year,” Brown said. “That’s one thing we do have.”
What the Bulldogs don’t have at the present time is Nick Timlin, who was burned in an explosion at a bonfire several weeks ago. Timlin suffered burns to his feet, legs and one hand when the fumes exploded and sent a group of people running for safety.
“Some of the kids that were there put some gasoline on the fire, and they used too much,” Timlin said. “I was standing nearby talking to friends and was not aware they were going to light it. I guess I was in the wrong place at the wrong time.”
When the explosion occurred, Timlin turned to run, but stumbled.
“It’s more flash burns, but I do have second degree burns on my feet,” Timlin said.
Smith is hoping to see Timlin, a team captain along with Brown, back in action within the first two games of the season.
“He’s strong, he’s a hard worker and he has a 4.0 grade-point-average,” Smith said.
Timlin (6-foot-2, 180) is a senior who is a three-year varsity player.
The pain from the burns was bad enough, but Timlin is feeling the effects even more.
“Probably the worst pain is not being there with my team,” said Timlin, who is expected to do some blocking from the backfield and play linebacker or end on defense.
In the meantime, the Bulldogs are getting ready for their traditional opener against Kent City. Looming in Week 2 is Whitehall, which is considered a league favorite for this coming season.
The Bulldogs will line up with Zimmer (5-foot-10, 185) at tailback. His skill running the ball is the reason Smith feels comfortable putting Brown at quarterback.
A rarity at Ravenna is having a big, skilled tight end, and this year they have sophomore Alex White (6-foot-4, 210). He is expected to not only be a key target when the Bulldogs opt to pass, but a solid blocker in the running game.
Another key player in the passing game will be Brett Postema, an end and someone who Smith considers a “go-to” guy. He also will be returning punts.
Up front, the Bulldogs will feature senior Joe McKenna (6-foot-1, 230) at power guard, junior tackle Kyle Ruiz (6-foot-0, 225), junior center Jake Seid (5-foot-10, 195), senior Dalton Jacobs (5-foot-9, 195) at guard and senior tackle Griffin Danhoe (5-foot-10, 205).
Many of the players will go both ways for the Bulldogs.
White will play defensive end while McKenna and Ruiz are the tackles. Junior Nick Anderson (5-foot-9, 185) is a defensive end, and sophomore Scott Hudson (5-foot-10, 175) is the noseguard.
In the defensive backfield, watch for Brown and Postema at cornerback and safety, respectively.
The linebacking positions will be manned by Seid and Timlin.
“We’ve got 21 guys right now, including four sophomores,” Smith said. “We have to stay healthy. We’ve got a really good nucleus, and we just have to improve every day, every game.”
Smith considers Whitehall and Oakridge to be frontrunners in the always-tough West Michigan Conference.
Montague and Shelby also are expected to contend.
“We will sneak up on a lot of people,” Smith said. “We’ve put in our time in the weight room, and we’ve got a good attitude.”