Last month, the Local Sports Journal published a 24-page high school football preview section. Here is the preview story on the Muskegon Catholic Central Crusaders. If you would like to purchase a copy of the football section, send an email to [email protected]
By Mike Mattson
Local Sports Journal
Beware of Muskegon Catholic Central’s 1-2 punch.
The Crusaders feature two of the area’s most explosive players – senior quarterback Zach Campbell and senior running back Jessie Anderson. They are experienced and motivated by a district championship loss at Mendon last season. 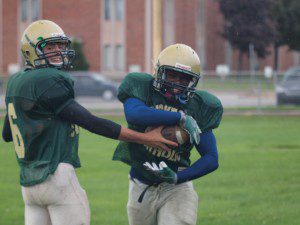 “This is my last year and I want to go out with a bang,” said Anderson, an all-state running back as a junior. “It was heartbreaking to lose the Mendon game by a touchdown. I felt I let the team down last year. Now, I will do all I can and leave it on the field.”
Mendon went on to capture the Division 8 state title, and Campbell said he knows MCC could have done the same.
“It was a tough loss, but we learned a lot,” Campbell said. “We have to never give up and play to the last whistle. I want to win state so badly. We are trying to get back to the state championship.”
Anderson (5-foot-7, 185) and Campbell (5-foot-11, 170) – who both possess 4.5 speed – will be featured options in MCC’s offense. Junior fullback Alex Lewandoski and sophomore running back Tommy Scott also will get carries in the Crusaders’ option attack.
Anderson will draw plenty of attention from opponents after rushing for 1,446 yards (6.6) and 16 TDs as a junior.
Campbell rushed for 546 yards (5.4) and 10 TDs, while completing 45-of-101 passes for 801 yards with five TDs and six interceptions.
Anderson was the workhorse back last year with 216 carries, but he’ll have more help with Lewandoski and Scott in the backfield.
“We have four quality runners and we’ll be able to move the ball around this year,” MCC coach Mike Holmes said. “Jessie may not get as many carries. Last year, he was the guy. We’ve put in more plays for the fullback.”
Holmes also is excited about the return of Campbell and his improvement in the passing game.
“This second year should be easier for him with not as much pressure,” Holmes said. “I tell him, ‘Use your athletic ability.’ We will throw the ball. He has a strong arm.”
Lamar Jordan (5-foot-11, 180), Anderson and Scott will see time at wide receiver during the season.
Senior Cari Campbell and Phil Mesker are the top candidates to play tight end.
Holmes has no worries about his offensive backfield, but there is early concern up front.
MCC’s offensive line will be inexperienced and young. Holmes has been considering different options to put the best line together and admits it could be a work in progress.
“The five interior guys, we are looking for people to step up,” Holmes said. “We have three freshmen and five sophomores. We are just trying to put people in place to help us be a better football team.”
Senior Tom Mitchell or freshman Nate Jones are vying for the center position, with Mitchell also in the mix to play guard.
Senior Eli Vihtelic and Mesker also are being considered for the guard positions.
Sophomore Mike Caughey (6-foot-1, 260) appears to have one tackle spot locked up, with senior Michael Garzelloni and freshman Jacob Holt (5-foot-10, 230) vying for the other tackle job.
Overall, Holmes thinks the Crusaders should be efficient on offense once the line gets settled.
“We will be as versatile as we can with the four backs,” Holmes said. “We’ll try to get on the perimeter and do some optioning to get the ball in Zach’s hands and other backs’ hands to make us tough to defend.”
Zach Campbell knows the line will be young and inexperienced, but he’s not worried about running room.
“They are smart,” Zach Campbell said. “They will be physical and will pop you in the mouth. They know their assignments. Our line will open up holes for us.”
Defensively, Mitchell and Garzelloni are back at the tackle positions in MCC’s 4-4 scheme.
Cari Campbell returns at another defensive end, with Dominic Midkiff, Holt and Caughey expected to see action at the other end spot.
The inside linebackers appear to be set with Mesker and Jordan, with senior Brant McCollum and sophomore Nick Holt pegged for the outside linebacker spots. Holt also is MCC’s backup quarterback.
The secondary should be solid with Zach Winzer, Zach Campbell, Scott and Anderson seeing action at cornerback. Lewandoski will patrol the field at safety after making 74 tackles as a linebacker last season.
Holmes knows the underclassmen must mesh quickly with the veterans as the Crusaders pursue at least five victories and a state playoff spot.
“We have kids who are going from junior high football to varsity football,” Holmes said. “If we didn’t think they could do it, we wouldn’t bring them up.”
Anderson is anxious to start the season and doesn’t mind the Crusaders being under the radar.
“I am ready for the first game to show everyone all the hard work we put in,” Anderson said.
Former MCC quarterback Steve Czerwon also is back on the varsity coaching staff. He replaces Dean Jewett, who will be assisting his son, Kyle Jewett, at Reeths-Puffer.