Adam Gilmour is getting settled into life in Muskegon and now he’s ready to play some hockey. 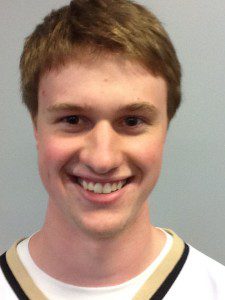 Not only was he drafted second overall, but he also was drafted by the National Hockey League’s Minnesota Wild that past year. He was their fourth-round pick, 98th overall.

He played high school hockey at the prestigious Noble and Greenbough Prep School. After one season in Muskegon, he will head off to Boston College, another elite hockey program.

Throw in his size (6-foot-3, 192 pounds) and you’ve got the makings of a solid hockey prospect.

“It’s been good so far,” said Gilmour, a right winger. “I’m getting settled in with my billet family and this last road trip really helped in getting to know the guys.”

He may be a little nervous about Saturday night’s home opener against Team USA, but he’s confident in his teammates and himself.

Gilmour, 18, and his teammates have worked hard to get ready for Saturday night and beyond. There was no running in the dunes along Lake Michigan this year, but there were enough 400-meter dashes and plenty of skating and lifting the last month.

“We will be a fast team,” said Gilmour, a senior at Mona Shores High School. “We will have good puck movement.

“We will play hard in all our games.”

Gilmour has even more motivation to play hard. He will be under the watchful eye of the Wild and Boston College.

Gilmour has had contact with the Wild since the draft from their director of player development to a regional scout.

“They will be keeping tabs on my progress,” Gilmour said. “They want to make sure I’m doing what I need to do.”

One of the bigger highlights of his summer was attending the NHL draft in Pittsburgh. He figured he wouldn’t hear his name called the first day, but it was called on the second.

“I was just hoping for the best,” he said. “I’d never been to Pittsburgh so it was a good experience for me.”

It was all part of a busy summer that also saw the resident of  Boston put 15 pounds onto his frame. That came from a combination of workout programs from his personal trainer and Lumberjack assistant coach Dave Noel-Bernier.

“We worked it in and it’s been good so far,” Gilmour said.

The preparations for the opener are nearly complete and Gilmour is ready to play his first USHL game.

“I don’t think I will be too nervous,” he said. “It’s just important for us to get off to a good start to the season.”