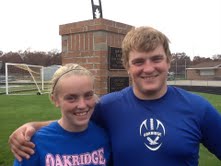 She’s the junior placekicker on the team. She’s competitive and mentally tough. And she has a pretty good sense of humor.

Beka and Jacob Shepherd are not only brother and sister, but two important reasons why the Oakridge Eagles are 9-0 heading into the playoffs. Beka is the kicker and Jacob is a standout two-way lineman. Photo/Ron Rop

“My friend James Abriatis said, ‘I can kick a football,’” Shepherd said. “So I asked him if I could be the holder. I did the Charlie Brown thing and pulled the football away. Everybody said, ‘James I thought you could kick a football.’”

Beka enjoyed that light “Lucy” moment, but she loves her serious role as placekicker for the Eagles. She’s one of the guys and the younger sister of two-way senior lineman Jacob Shepherd.

The Shepherds have helped make this another special season for the Eagles, who are 9-0 and West Michigan Conference champions. Jacob said Beka has done her part.

Oakridge hopes to start a playoff run at 7:30 p.m. Friday when it hosts Buchanan at Jack Schugars Field.

Oakridge coach Cary Harger wasn’t sure if he wanted any part of Beka Shepherd’s quest to be on the football team. Who could blame him?

“Initially, I was unsure about it,” Harger said. “I kind of wondered what her motivation was. I wondered if it was to test the waters of a boys’ sport or to prove something to herself.

“But one day she helped me after practice and said, ‘I want you to watch me kick.’ She worked on it. She got my attention one day on punching on the ball and she did well on accuracy. She’s won the job since then.”

Actually, Beka had another motivation tied to Jacob.

“It all started with my big brother because he’s my best friend, hands down,” Beka said. “I will miss him when he graduates this year. I decided to play football with him so we could have one last thing together before he leaves.”

Shepherd has attempted two field goals this season against Montague. She missed a 35-yarder and made a 22-yarder. She’s also converted 22-of-30 PAT kicks.

“Missing the first (field goal) brought me down,” she said. “I just missed three points against our biggest rival. Coach Harger just said to calm down, and on the second one, he said you want to pound this. Making a field goal against Montague was a big accomplishment for my first year.”

Beka said her experience playing defense on the girls’ soccer team has helped her in kicking a football. Plus, former head coach Jack Schugars, who coaches special teams at Ferris State University, has given her valuable tips.

“You have to plant the foot the same and you have to kick the football in the same spot as a soccer ball,” she said. “Playing soccer has helped a lot. There is more to kicking a football than a soccer ball.”

Beka admits she does feel pressure in games and she’s superstitious. But she said holder Dom Greenawalt gives her confidence when she kicks.

“Without him, I feel I am going to miss,” said 16-year-old Beka, who proved her commitment to the team by attending off-season weight training sessions.

“(Greenawalt) has done a great job this year to keep her focused on the ball and giving her confidence,” Harger added. “He says, ‘I will get the ball on the block and you kick it.’”

Beka said she has not heard negative comments from opponents or fans about her kicking for the football team.

Jacob said playing on the football team with Beka is no big deal. He enjoys doing the dirty work as a lineman and encourages her to be a successful kicker.

“I see her now more than I normally do,” he said. “We’re no different than any other brother and sister relationship. We have our occasional moments we don’t talk to each other, but it’s over in a couple of hours.

“I see her as a best friend, but I can be a pain in the butt too. She knows I can still outkick her, but she is getting better.”

Harger said the Shepherds have been a good influence all season for the Eagles. It’s an influence he hopes will continue through the final game of the season.

“They both work extremely hard” Harger said about the siblings, who are the children of Rich Shepherd and Ray and Laura Felcoski. “They are determined to be the best at their jobs as they can be. When Beka was struggling at the beginning of the season, Jake would hold for her and she would kick. It was a cooperative effort with Jake and Beka and the family.”

Jacob is now focused on helping the Eagles make their mark in Oakridge football tradition. A long playoff run would cap a great senior season with his teammates and younger sister.

For Beka, it’s about enjoying the ride. She’ll stay competitive and provide some light “Lucy” moments along the way.

“It’s s like a big family out there,” she said. “Oakridge is definitely the definition of family when it comes to the football team. You don’t realize how big a family is until you are out there. You can feel everybody means what they say.”