The loss was painful enough since the Chargers now own the t0p sport in the River Valley Conference at 5-0-1, but for the Warriors, the pain went much deeper than that. 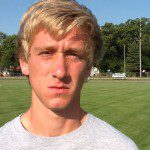 Senior captain Josh Binnendyk suffered what could be a serious leg injury with 18:22 left in the second half and the Warriors clinging to a 1-0 lead.

Chaise Schuiteman ripped a low shot just 3:36 into the opening half that gave the Warriors (8-6-1) the early lead.

Covenant put good pressure on the Warrior net all night, but could not score until the latter stages of the second half.

Travis Hanko fired a shot that hit a Warrior defender and ricocheted into the net with 10:12 remaining in the game.

A free kick by Jordan VanOosenbrugge with 1:26 remaining hit the crossbar and fell into the net. That set off a wild celebration among Charger players and their followers.

“Hats off to Covenant,” Hulings said. “They played a superb game. They got the victory and they stayed with it all the way to the end.”