Claire Abendroth hit a 10-footer and two free throws down the stretch and led the Fremont Packers to a 38-37 victory over the Spring Lake Lakers on Friday night. 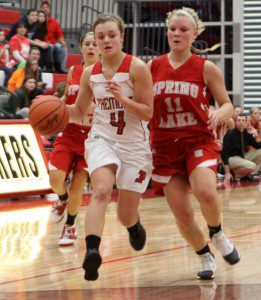 The game was tied with 45 seconds remaining and that’s when Abendroth gave her team a four-point lead. Spring Lake a last-second 3-pointer to complete the scoring.

“It was a close game all night,” Fremont coach Bill Karnemaat said. “Both teams were fighting hard.”

“It was a great way to open up the new, beautiful gym,” said Karnemaat, whose team is 1-1.

Becklin and Beebe lead Ravenna in 57-48 win over Shelby