Rachel Bruinsma made it 5-for-5 on Friday when she signed a letter of intent to play volleyball at Division 1 Valparaiso.

Rachel, a senior at Western Michigan Christian High School, joined her sister and three brothers to receive a college scholarship for sports and the third to play Division 1. 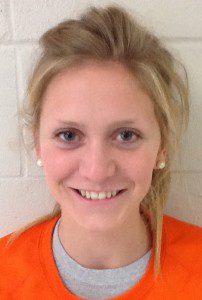 Rachel signed her letter on Friday at in WMC’s front lobby area.

The youngest child of Henry and Margaret Bruinsma of New Era also is the first female WMC athlete to go Division 1.

Janet and Will Bruinsma both played at Trinity Christian College. Janet was a soccer play and Will played basketball.

Nate Bruinsma is a Division 1 soccer player at Western Illinois, which was just eliminated from the NCAA tournament this week.

Rachel, a 6-foot-1 outside hitter, led the Warriors to the Class C regional tournament, where they dropped a five-game match to Pewamo-Westphalia. She finished the season with 673 kills and 164 aces.

Currently, Rachel is getting ready for her season season on the Lady Warriors basketball team.