MONTAGUE – The outcome was decided rather early on Monday night at Montague High School.

The host Wildcats shot the lights out early on en route to a 78-34 nonleague boys basketball victory over the Orchard View Cardinals. 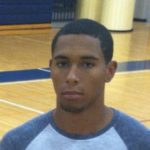 With the outcome decided by halftime, the only other question to be answered was when would high-flying senior Brandon Moore score his 1,000th point of his four-year varsity career.

“We were looking for Brandon to get his points and get it over with so we could move on,” Montague coach Dave Osborne said.

Needing six points to reach the milestone, Moore struggled in the first half.

“I really think he was (pressing),” Osborne said. “We talked about it going into the year as one of his individual goals and as a team we all wanted to get him that goal. Coming the game tonight, I really think he was pushing hard to get it. What happens when you start pressing … bad things happen.”

All that was forgotten early in the second half when the Wildcats ran a play to get Moore open on the wing. And with just 29 seconds elapsed off the second-half clock, Moore canned a 3-pointer to push him over the milestone point.

“So much emotions were going through my body getting the 1,000th point,” said Moore, who finished the game with 13 points. “Sometimes when you try to hard, you really don’t play your best, but then I just relaxed, settled down and got it.”

In the first half, with Moore sitting on 998 points, he broke free on what appeared to be a breakaway dunk, but he was fouled intentionally then missed the two free throws.

“It was a little frustrating, but that’s basketball,” Moore said.

It was all part of game in which the Wildcats led 34-13 after one quarter and 54-29 at the half. Chase Casebolt canned four 3-pointers in the first quarter to lead the charge. James Boerema scored eight of his 10 points in the first eight minutes. Casebolt finished with 16 in the quarter and 21 points for the game.

“We played well tonight,” Montague coach Dave Osborne said. “We jumped on them right away with our pressure and hit some open shots. Chase Casebolt was hot and that gets us going early inside and outside. I thought James Boerema played a great game. Seemed like when we did miss he cleaned it up and put it back.”

Luke VanBoxel, a junior guard, also had a solid game for the Wildcats. He finished with 14 points.