The induction will be in Des Moines, Iowa on Feb. 23. 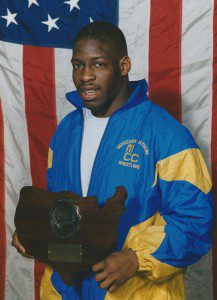 Ruffin graduated from Flint Northern High School, where he was a four-time state qualifier. He placed three times and captured a state title in 1994. His prep record was 160-10. He led the Vikings to a state title and a No. 5 ranking in the country.

Ruffin opted to wrestle at Muskegon Community College under Coach Ron Gaffner. He was a two-time Region XII champion and a two-time NJCAA All-American. He placed fourth in 1997 and won the title at 118 pounds the following season.

His dual meet record of 21-1 and career record of 46-4 gives him the highest winning percentage in MCC history. He was named Outstanding Wrestler both seasons at MCC.

Following his career for the Jayhawks, Ruffin received a full athletic scholarship to Eastern Michigan University, where he placed eight in the Midlands Tournament and was voted team captain and Most Valuable Wrestler. As a senior, he was ranked as high as No. 15 until a season-ending injury put on the sidelines. He received his bachelor’s degree from EMU in 2002.

Currentlly, Ruffin is a production manager for Cliff Keen Wrestling Products in Ann Arbor. He also is in his 10th season of coaching wrestling at Ypsilanti High School.

He resides in Ypsilanti with his wife, Monica, and two sons, Isaiah and Xavier.