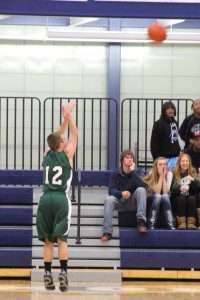 Nate Taylor picked a great time to score the biggest basket of his career at Western Michigan Christian.

Taylor canned a long two-point shot at the buzzer and lifted the Warriors to a 60-58 victory over the host Mona  Shores Sailors on  Friday night.

The Warriors set up a final play after a timeout with 14 seconds left and got the ball into the hands of Henry DeKam. When he couldn’t find an opening, he found Rop near the free-throw line. Rop passed up the shot and flipped the ball over to Taylor, who wasted no time launching a shot that fell through the net as the buzzer sounded.

“Nobody works harder than Nate,” WMC coach Kyle Mastenbrook said. “Nobody puts more into the game than Nate so it’s awesome that he’s able to experience this. I’m so happy for him right now.

“It was just a great pass by Rop giving it to him,” Mastenbrook said. “Passing up a good shot for an even better shot then knocking it down.” 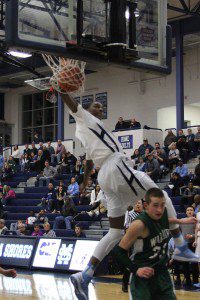 The Warriors weren’t very happy in the final minutes of the game trying to protect a lead against the Sailors. WMC saw a double-digit lead disappear in the fourth quarter thanks to Shores’ 11-for-15 performance from the free-throw line in the final quarter. And a thunderous dunk by Adreon Billips and his 3-point basket on the Sailors’ next trip down the floor gave Shores a quick five points.

WMC starters Bernard Smith and James Jackson were both on the bench with five fouls and the Warriors’ other three starters were hanging in there with four fouls each.

“We had guys step up in big spots,” Mastenbrook said. “Henry had to be a scorer tonight and he was able to do that. Logan Waller has been practicing so well over break and he’s really stepped it up.”

DeKam finished with 14 points and  Waller added nine. Smith, who scored 27 and 28 points the last two games, finished with 17 points before fouling out with 3:44 left with the Warriors clinging to a five-point lead.

Shores made some key baskets and free throws down the stretch to knot the score at 56-all. Logan Haugh made two free throws and scored from in close with 32 seconds remaining. Other key buckets during the Sailors’ comeback came from Cameron Matthews and Kobe Burse.

Chaise Schuiteman scored a key Warrior basket down the stretch and the teams went into the final seconds tied at 58-all.

Then came Taylor’s buzzer beater that sent the WMC student section into a frenzy and left the Warriors with a modest three-game winning streak.

Haugh led a balanced Sailor attack with 14 points, post player Adam Rayner had 13 points before fouling out, and Matthews had 11.

Crusader defenders may be small, but they don’t give up many yards or points