Schmitt and Harrell will be playing for the University of Charleston in West Virginia at the Division II level.

Rogers is heading to the Division III Dominican University in Chicago.

Wagonmaker will be staying close to town at Aquinas College in Grand Rapids.

The Jayhawks were led by Schmitt with 11 goals last season. He also made the All-MCCAA team and was first-team All-Region XII.

Harrell played for MCC since the program became accredited and played in all 40 games. Scoring three goals and four assists last season, Harrell holds the career record with 11 assists during his two years playing for the Jayhawks.

Defenseman Camerson played in 39 games for MCC and had a goal and an assist in his two seasons. 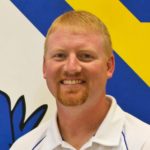 “Michael, Kody, Ryan, and Cameron have left a legacy for the MCC men’s soccer program in the type of player and person the coaching staff wants in our soccer program,” said MCC coach Ben Ritsema.

“All 4 of them were willing to take a chance on playing on a brand new junior college varsity team out of high school and now they are fulfilling their dreams of playing at a 4 year institution.”

Check out the videos below to watch highlights from a pair of Jayhawk games last season.