For Chris Bobryk kiteboarding is his way [VIDEO] 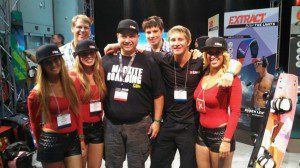 Chris Bobryk has demonstrated both when it comes to his kiteboarding efforts.

The Whitehall native Bobryk doesn’t just catch wind, he controls it and makes it his art.

Those skills have landed him a spot as a freestyle rider on Best Kiteboarding’s team in the Pro Kite Tour.

After recently competing on the European leg of the PKRA, Bobryk was in town and was eager to show area kiteboarders how hard he’s been working.

With an invite up to Little Sable Point, I headed out with my camera to film Bobryk to assemble a kiteboarding shredit.

Currently Chris is down in Orlando for the Surf Expo Trade Show. He made the trek down with MacKite Surfshop owner Steve Negen.

The Association of Wind and Water Sports Industries’ recently nominated Bobryk for Kiteboarder of the Year. The milestone was almost reached for Chris as he finished fourth in the competition.

And that is a reason to tip our hats to Chris Bobryk.

Check out the video below to see Chris in action at Little Sable Point.