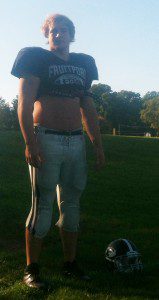 Fruitport senior tackle Chris Hendricks is set to have a big game this Friday against Ludington. (Photo by Mark Lewis

In fact, Hendricks’ thoughtful, soft-spoken demeanor often seems downright cerebral compared to the popular image of those big meanies who supposedly bash heads down on the line of scrimmage.

Don’t let the cool, collected façade fool you, though. When push comes to shove, Hendricks will more often be the one pushing instead of being the one getting shoved.

“I like to get right down in there and compete,” said Hendricks. “I like it when we run or pass my way. I like to have an impact, make my own mark on the game.”

Fruitport, long-known for a run-first, run-second, run-third philosophy (mind you, this is the former home of Steve Wilson’s famed wing-T offenses) is undergoing, under second-year Head Coach Greg Vargas, a transition from three-yards-and-a-cloud-of-dust to a more balanced mix of running and passing.

They started making the move last season, and the Trojans ran, and passed, to an incredible 8-0 start. Over this summer, the change was solidified. For the lineman it meant a switch to a zone-blocking scheme, which can be difficult to pick up at first. Nevertheless, players like Hendricks embraced the change.

“From what I’ve known, we’ve always been that straight, pound-it down your throat running team,” said Hendricks, who transferred to Fruitport from Mona Shores before his junior year when his family moved to the quaint community. “When I was at Shores, we always thought of Fruitport as a tough team that would hit you in the mouth and then score on you. But if it was going to happen, it was going to happen on the ground.

“So being here during the switch to a passing offense,” he continued, “getting to air it out, is pretty cool. Some former players said quarterbacks around here just used to hand it off and stand there. That doesn’t happen as much anymore.”

He added, “Coach Vargas is definitely keeping alive the Fruitport tradition, but switching it up a little bit too.”

For his part, Vargas noticed right from the start that Hendricks would be a huge asset to the team.

“Right away,” said Vargas, “Chris brought a difference in attitude. In the weight room, on the practice field, he brought with him the kind of attitude we welcome here in Fruitport. So, yeah, you could say we were very glad he ended up here.”

But moving to a new school district so late in one’s academic career is never easy, even if you’re a 6-5, 275-pound tackle.

“He’s a nice kid, and that goes far whoever you are,” said Vargas. “He also works hard, and those are things kids see and respect. Kids who come in and can contribute right away, well, it is easier for them to adjust and be accepted in a new place. Like I said, he’s a really nice person, as well as being a really good football player, so he fit in pretty well immediately.”

Though it might not seem like the best place to make friends, Hendricks soon found himself forming some of his strongest relationships one the line of scrimmage. Late last season, Jagar Burrous earned the starting left guard job, and the pair was quick to form a special connection. While the life of a skill-position player is well known to the public, the alliances forged by players on the line of scrimmage are more difficult to penetrate.

Playing next to a guy for a critical mass of snaps causes secret languages to form, cues to be conveyed and deciphered. From grunts to body language – to yelling out the name of a running back’s girlfriend if a double-team is needed; “We like to mess with the backs’ heads,” Hendricks chuckled – guard/tackle duos develop a communication style that may be as unknown to the opposition on the other side of the ball as it is to their counterparts on the opposite end of the line. Hendricks said he will call down to the right tackle, in this case junior Kylan Sherman, if he reads something in the defense Sherman should know.

But more often Hendricks and Burrous are assessing the situation on their own side, and deciding together what they’re going to need to do about it.

“Burrous and I work really well together,” he said. “He only has to point at something a certain way and I know what he means.”

Hendricks has gotten an offer to play next year at Florida Atlantic and some looks from Big 10 teams. (Photo by Mark Lewis)

Often they’ll make small adjustments on the fly, responding to what they see as the defense lines up in front of them or based on what they saw the last time they ran a certain play. Even after the ball is snapped, if a lineman can do his job and help out a fellow lineman who is struggling, even better, said Hendricks. By halftime, everybody on the line of scrimmage has a pretty good idea what’s winning or losing the game. Coaches will descend on their lineman to find out what things look like at ground level.

It goes to show that even those with trained eyes, sitting high above the field in the press box, often calling the plays…even they can have trouble seeing what’s truly unfolding on the line.

“At halftime, the coaches are pretty calm, and they’ll listen to what we tell them,” said Hendricks. “It’s the first thing they ask us when we get in there. ‘What are you seeing?’ They’ll even ask the quarterback and backs what’s going on on the line. Everybody knows that’s where it all starts.”

Coming off last year’s 8-0 start, the Trojans finished 2012 0-2, losing by one point to DeWitt in the season finale and then to the eventual Div. 3 state champion Grand Rapids Christian Eagles in the opening round of the playoffs.

This was the year was intended to be a chance to improve upon 2012’s showing, when the Trojans would turn a playoff appearance into a playoff win – despite making the playoffs three-straight seasons, Fruitport has failed to advance past the first round in as many seasons.

Instead, the team has at times struggled to open 2013.

Trailing 13-0 at halftime in the season opener versus Reeths-Puffer, Hendricks said the team reacted poorly in the locker room and then let the game slip away in the second half.

The Trojans fell 26-7 to the Rockets, with Reeths-Puffer running backs Julian Munday and Dereko Riley, and quarterback Gerrett Blanshine combining for 263 yards on the ground and four scores. By contrast, the Trojans managed just 115 yards in rushing, and 161 total yards.

So that’s why the Week 2 win over Fremont – and how the Trojans went about winning it – was so important. Quarterback Luc Kostamo ran wild, finishing with two scores through the air and two more on the ground, while the defense added a fumble recovery for a TD and a pick-six as well in the 40-19 victory.

The next week, the Trojans left it all on the field in a 10-9 loss to rival Spring Lake, and then bounced back again with a 34-7 drubbing of Tri-County.

“Sure, it’s a disappointing way to start the season, and we’re disappointed in the overall results thus far,” said Vargas. “But, we’re excited to go out in Week 5 and get better, continue to improve. Truth be told, sure we started 8-0 last year, but we won a lot of close games that could have gone either way. Those close games happen to go the other way this year. That’s just part of the game. That’s the reason we play the game Friday nights. That’s the exciting part about football. It’s a new challenge for us, one we look forward to tackling, moving forward and growing. That’s the challenge we look to accept and overcome.”

The mindset has changed slightly since the two early losses. With at least a share of the Lakes 8 title still up for grabs if Fruitport wins out and Spring Lake takes a conference loss, no one is panicking.

But it’s anyone’s guess which Trojan team is going to show up this Friday versus a very good 3-1 Ludington team, on Homecoming night no less. 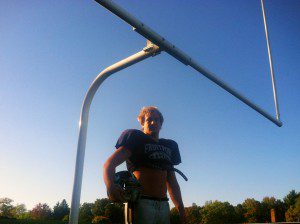 Hendricks said he isn’t looking for awards and accolades. He’d be happy with a deep playoff run. (Photo by Mark Lewis)

“They’re always a well-coached team,” said Vargas of the Orioles. “Coach (Charlie) Gunsell is creative with their offense and always seems to get the best out of the players they have.”

In fact, while Vargas doesn’t usually know the names of opponents (often referring to them during film sessions using just their jersey numbers), there are two Ludington names the coach knows by heart going into this Friday’s game: quarterback Chad Large and tight end Jake Kasenski.

“Chad is extremely athletic and is a game-changer on both sides of the ball,” said Vargas. “We will definitely need to keep tabs on him. Same with Kasinski. I know their names because those two can really make a difference for their team.”

A veteran of a few Ludington/Fruitport battles himself (all but one – including Vargas – of the Trojan staff played football at Fruitport), Vargas knows it’s going to be a clash of wills; the winner will be able to enact its will over the other.

“We’ve played Ludington for a long time,” said Vargas, “and they are always big, strong, tough kids. I know they are just itching to get a win against us. We are just working hard to not let it be this year.”

Hendricks too knows his team will need to be in top form versus the Orioles.

“Obviously they are doing something right up there,” he said. “We have to be ready.”

“It’s not that much different to go from offense to defense,” he said, before stumbling a bit and admitting, “Well, yeah, it’s a little bit different. On offense, you have a good idea where you’re going, and then just to switch it to reacting more, it’s a little confusing. But after a few plays, after you’ve seen a trap or something, you adjust to how they’re playing it. The more you do it, the easier it gets.”

His performance both ways has earned him plenty of attention. A Detroit Free Press All-State selection last season, Hendricks is currently being courted by Florida Atlantic University (which has made him a scholarship offer) and a few Big 10 schools, including Michigan State and Purdue.

“It’s a fun thing for me just to see how the whole recruiting process works,” said Vargas, “but it’s got to be super crazy for him.

“Chris is a darn good football player and now there’re a lot of people who know he’s a darn good football player. That’s all that attention means. If (accolades) motivate a kid to become a better player, then it’s good for that reason. But Chris is the kind of kid who’s going to be good no matter what awards he’s given. It was his hard work that earned him (the All-State selection) last year, but that’s not something people really get to see except in games.”

For Hendricks, living the college dream has been put on the back burner, replaced with more pressing concerns.

“The better we play, the more those awards will make it down to us,” he said. “We play better as a team, we’ll get plenty of attention. I’m not really worried about that. Right now, I’m worried about this week, not what happens once the season is over.” 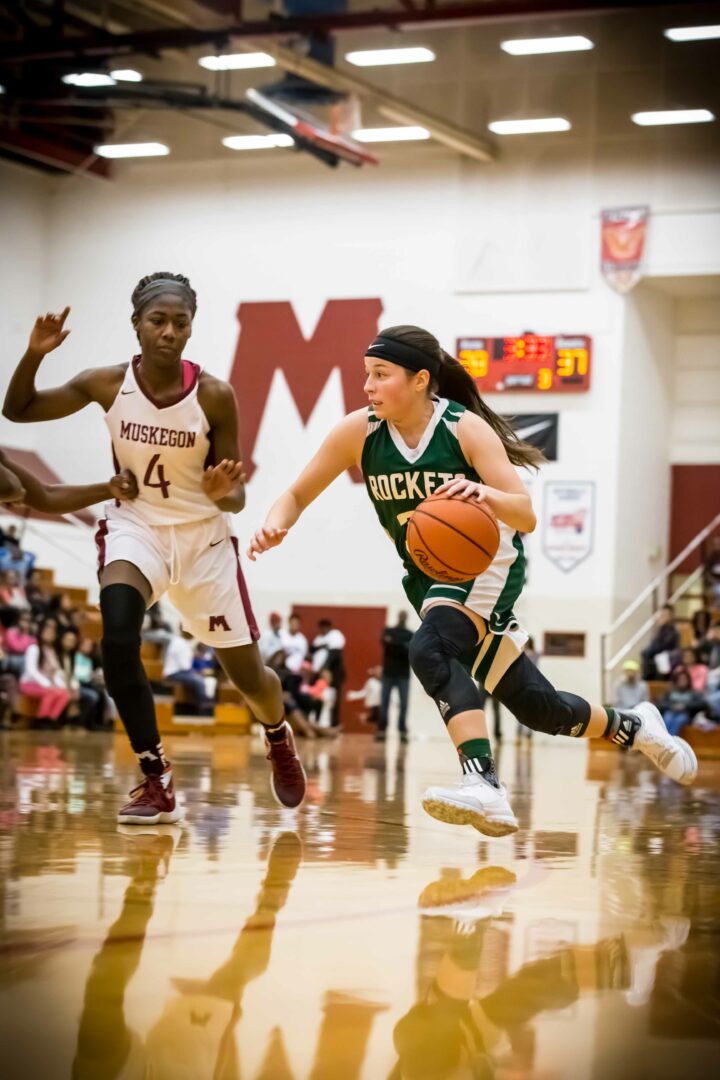