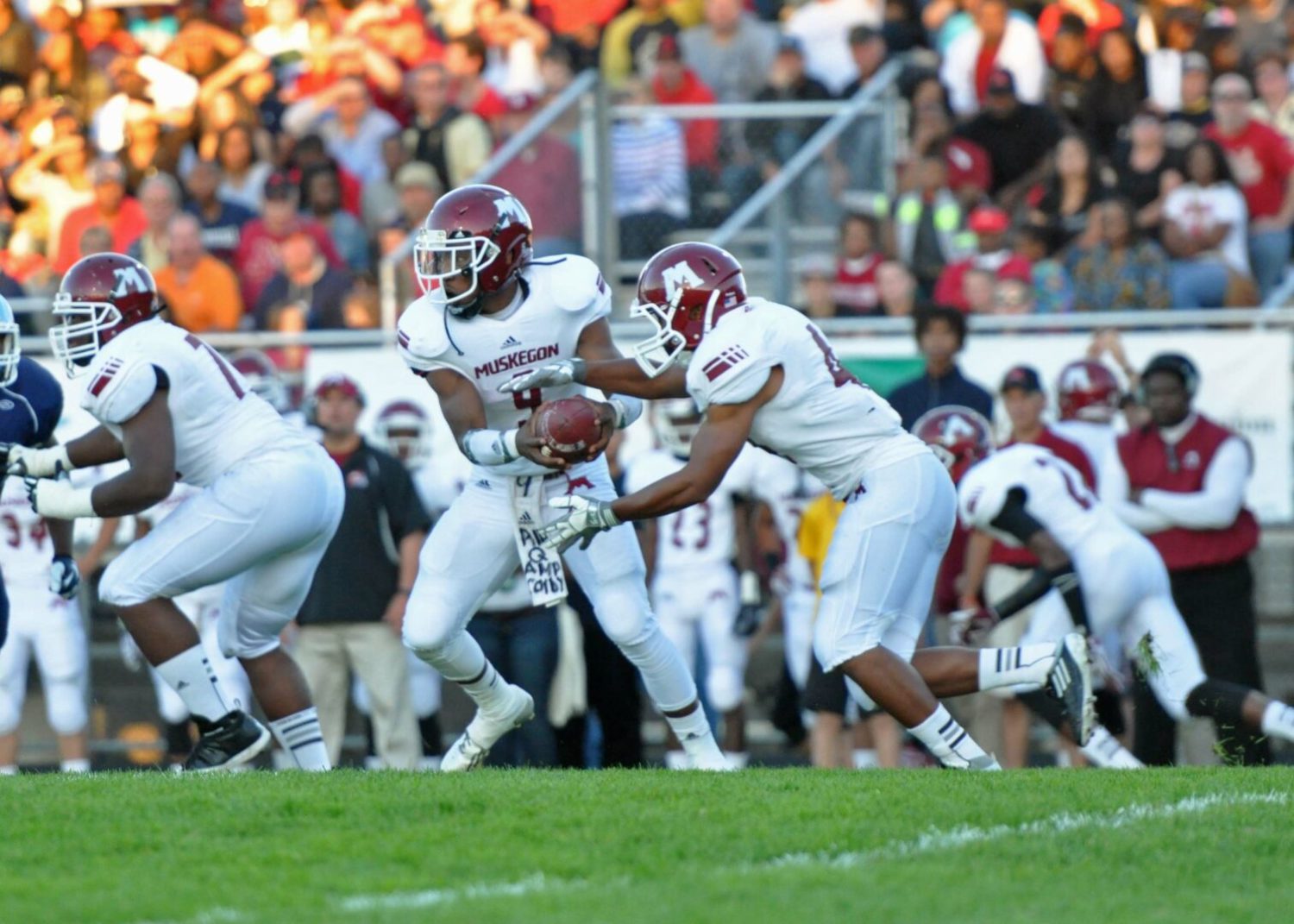 A standing room crowd of 10,000 was treated to a classic high school football game on Friday night at Mona Shores. 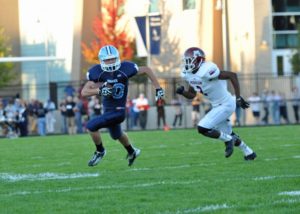 The host Sailors were deadlocked at 20-all with the Muskegon Big Reds, but a dramatic 53-yard touchdown catch by Tavon Jackson with 5:59 remaining in the game gave the Big Reds a 26-20 victory.

It was the second year in a row the Sailors were in a position to win in the latter stages of the game only to fall just short.

“Once again we came out and improved and played a much better second half,” Muskegon coach Shane Fairfield said. “It’s the same old thing. It’s about us executing and getting off the ball.”

Mona Shores led 12-7 at the half and many in the crowd must have been wondering if this would be the year the Sailors would knock off the battle-teated Big Reds, who had four difficult games the first four weeks of the season. Muskegon scored on a 12-yard touchdown run by John Hall and Shores countered with a 6-yard touchdown run and an electrifying 53-yard touchdown pass from Tyree Jackson to Brown.

However, Muskegon made a very loud statement to open the second half. Jackson returned the opening kickoff to the 38 then Javauntae Thomas found a hold right up the middle and dashed 55 yards down  to the Sailor 7. On the next play, Big Reds’ quarterback Deshaun Thrower darted into the end zone. Just 38 seconds into the third quarter, Muskegon was back on top, 14-12.

Later in the quarter, Muskegon went back on the offensive and scored again. This time a drive that started in Sailor territory at the 44 ended four players later when Thomas scored from 4 yards out. The key played on that short drive was a 27-yard run by Thomas that put the ball on the 6. The pass failed on a two-point conversion attempt and Muskegon led 20-12.

Mona Shores had a quick response for that touchdown with a score of its own. Four pass completions by junior quarterback Tyree Jackson moved the Sailors quickly down the field. An unsportsmanlike conduct penalty on Muskegon also helped, but it was key pass plays from Jackson to Astanay Brown of 16 yard and later of 9 that put the ball in the end zone. On a second down play from the 9, Brown outjumped a Big Red defender for the touchdown.

Trailing by two, the Sailors went for the tie and got it when Jackson found Logan Smith in the corner of the end zone for two points that tied the game at 20-all.

“We gave ourselves a chance,” Sailor coach Matt Koziak said. “But until we beat them we are not on their level. I will say I’m proud of our kids, but we need to win games like this in order to be contenders to whatever you want to call it.” 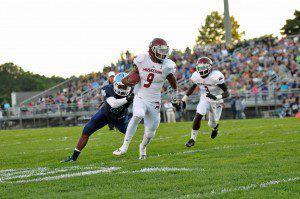 Muskegon’s next drive came to an abrupt halt when the Big Reds fumbled and Shores’ sophomore Mike Bordeaux fell on the loose ball.

Shores was able to reach the 9, but turned the ball over on downs in the latter stages of the third quarter.

The Sailors had another opportunity to mount a drive and faced a fourth and 2 from the Muskegon 40, but Big Red junior lineman Roland Sharp sacked Jackson and Muskegon took over.

After a run play that gained no yards, Thrower found a wide open Jackson behind the Sailors’ defense and Muskegon regained the lead. The extra point was blocked by Brown and that left the Sailors a touchdown and conversion away from the lead.

Mona Shores had one more possession – three and out – and the Big Reds ran the final 4:59 off the clock. The Sailors had used their three second-half timeouts earlier and had no way of stopping the clock.

“They made less mistakes than we did and some big plays,” Koziak said. “I thought their coaching staff did a good job to adjusting to us in the second half. We struggled running the football with them up front. I thought our quarterback made some great reads. Asantay Brown is unbelievable, we have to make more plays to beat a team like this.”

Fairfield was breathing a sigh of relief after the narrow victory.

“It’s getting off the ball, not having 22 yards in penalties on one drive,” Fairfield said. “We have the ball in the ‘red zone’ and and all of a sudden we’re back on our 20. It’s just ridiculous the mistakes we keep making over and over, but we could have easily have lost it as we could won it. So we will take ugly over pretty any day.

“That is a great team over there and they threw it all over the yard,” Fairfield said. “Our goal was to let them move it around, but keep them out of the end zone.

Indeed, the Sailors did move the ball in the air as Jackson completed 22-of-34 passes for 262 yards. Brown caught nine for 124 yards and Marquon Sargent caught four passes for 90 yards.

Taran Smith had a game-high 16 tackles for the Big Reds.