WHITEHALL – Mona Shores’ Sam Kling has learned that it pays to remain patient in a challenging game like tennis.

He remained patient each of the last two years, as he watched many of his teammates win individual city championships while he came up short.

He remained patient the last three times he played his archrival, Whitehall’s Tell Sutton, and lost on each occasion. 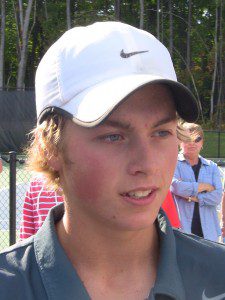 And he remained patient Saturday when he grabbed big leads over Sutton in the second and third sets of their city title match, only to have Sutton roar back each time.

In the end all the patience paid big rewards as Kling outlasted Sutton 6-2, 5-7, 6-4 Saturday to capture the No. 1 singles championship at the Greater Muskegon Athletic Association City Tennis Tournament at Whitehall High School.

“We say that half of tennis is mental and Sam has developed a great mental game and that couples with his ability to come out and hit some hard shots and hit consistently,” said Mona Shores co-coach Jared Stratz. “It all came together into what we saw today. It was just a really, really good match.”

“It doesn’t happen very often,” said Mona Shores co-coach Andrew DeBruyn of his team’s domination on Saturday. “The goal is always to get everyone to the finals and go from there, and hopefully play at the level that we played today.”

While the team title was another reminder that the Mona Shores tennis program is the best in the area, most of the focus Saturday was on the rematch between Kling and Sutton, who are generally regarded as the top two singles players in the area.

Sutton came into the match undefeated in four years of city tournament play, and was seeking his fourth straight individual championship. He defeated Kling in the No. 1 singles title match last year and was the top seed in the tournament this year.

There was every reason to believe Sutton would continue his title run, particularly since he had beaten Kling all three previous times they played in high school competition.

But Kling is not the type to let the past bother him. He calmly grabbed a 3-0 lead in the first set and cruised to a 6-2 victory.

Kling was down 4-1 in the second set and it appeared that Sutton had found his game. But Kling captured the next four games to take a 5-4 lead, and was four points away from the title.

Then Sutton dug deep and won the next three games and force a third and final set.

Kling won five of the first seven games before Sutton came roaring back again, winning the next two games and seemingly stealing the momentum down the stretch.

But Kling served his way to the title in the 10th game of the set, finishing off Sutton with a vicious overhead smash that bounced over the wall behind Sutton and out of the court.

“I was thinking the finish line was close both of those times when I led 5-4,” said Kling, who previously won a city title as a freshman at No. 4 singles. “I was real nervous.”

While Kling might have felt some butterflies, he managed to keep his cool and stick with his solid baseline game, while the more temperamental Sutton became visibly upset several times during the match and hurt himself with unforced errors.

“During my matches I’m usually the quiet one compared to my opponent,” Kling said. “I know how to play him. Sometimes I just don’t convert it. Today I just tried to keep more balls in than I did last time. The last time I had a lot of unforced errors.”