Explosive senior is a two-way weapon

MUSKEGON – Sure, the latest edition of the Muskegon Big Red varsity football team certainly is stacked with talent, with several Division 1 college prospects and big-play athletes dotting the roster.

Muskegon’s John Hall is one of the few Big Reds to handle both offensive and defensive duties. (Photo by Mark Lewis)

And sure, the 2013 Big Red offense is prolific in the air and on the ground – last week, Muskegon put up three scores in less than a minute en route to a 35-13 victory over the former No. 1-ranked Div. 2 team, Grand Rapids Christian; while the Muskegon defense dominates opposing running and passing games with a ‘we-dare-you’-type attitude that only comes when one can actually back it up.

But it was hard to tell who’s who Wednesday afternoon as the Big Reds practiced for their next ‘Biggest Game of the Season’ – that is, Friday’s showdown with likewise-undefeated Rockford – on the

Muskegon High School practice field, just feet away from historic Hackley Stadium. In fact, the team traveled as a unit up-and-down the practice field at such a rapid pace, moving with ease from off-guard traps to 50-yard touchdown bombs, that it was as though they all share the same mind.

Yet, if you looked closer you would start to see that some of the players, even among this elite group of student-athletes, shine brighter than the rest. And if star-power even comes close to matching one’s athletic ability, Muskegon senior John Hall is a definite super nova in the making. 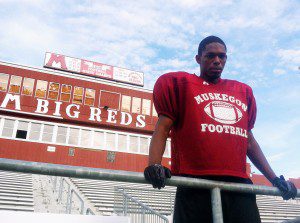 Muskegon senior defensive back/running back John Hall is one of he most dynamic players in the state. (Photo by Mark Lewis)

Of course Hall wasn’t always the two-way starter fans know him as today. Growing up near Laketon Avenue, Hall attended Moon Elementary, and later Steele Middle School, hearing about the gridiron exploits of family members, witnessing those dominant Tony Annese-choached squads chewing through opponents in the mid-to-late aughts, taking in the perfection that is Hackley Stadium Friday nights in the fall: the stadium, the band, that list hanging over the press box of state champion teams too numerous to count on two hands.

For Hall, it all added up to something he would aspire to, when he got the chance.

“It was like they were superstars, for real,” said Hall, recalling his young impression of the Big Red experience. “I always wanted to be like Ronald Johnson. I had big cousins up here, David Churchwell, Jason Hannett. I just wanted to be like them. I used to come to the games with my dad and them, used to come up here wearing my Port City jersey. I’d sit and watch the game and think, ‘I’m going to be out there one day.’

Almost a decade later, Hall stands at the pinnacle of high school football, playing for one of the most legendary high school football programs in the country, leading the team to one more attempt at a state title. Ironically, now he’s the one all the kids are looking up to.

He doesn’t look all that bad in the coaches’ eyes, either.

“A 14-game returning starter from last year,” Big Red head coach Shane Fairfield said of Hall. “He’s played in a lot of big games in a lot of big settings. We can try to say we’ve coached John to be the way he is, but really it’s that he so instinctual. There are a lot of things we can do when he’s out there that break (conventional wisdom), just because he’s such a playmaker. We’ll just turn him loose.”

On offense, Hall lines up in the slot position, taking handoffs and pitches to the tune of about four or five touches per game. Hall’s speed makes a big gain a distinct possibility.

Not that he’s counting.

“You know, I don’t really care about touching the ball,” said Hall. “It’s nice to see what I can do when I get the call, but I want to go out that there and block for my teammates, let them score it and all that. It’s just not all about getting the ball and scoring, you know? Somebody has to make plays other ways. If that play means a score, if it’s good for the team that’s really all that matters.”

But defense is Hall’s true love.

““I like defense,” Hall said with a sly grin. “Since I was a kid, I always liked coming up and hitting people. It’s just makes it a little easier now that I also know how to cover (receivers). We try to make it easier on each other.”

Hall doesn’t play as would a traditional safety. Instead, Fairfield labels Hall’s defensive position as a ‘Warrior’: a kind of weak outside linebacker who can also line up at safety, defend the flat and blitz from the weak side. He’s not afraid to cover a guy or come up to stop the run.

“John’s like (Pittsburgh linebacker Troy) Polamalu,” said Fairfield. “We can line up John anywhere: on the strong side, on the weakside, at linebacker, at end, and at safety. We consider him to be our adjustor. We’ll put him wherever we want and he’ll just flow.”

Hall’s play has been outstanding thus far this season. He had picks against Grand Haven and Grand Rapids Christian, returning one for a score in the season opener (where he also recorded a team-high six tackles, including two for a loss). 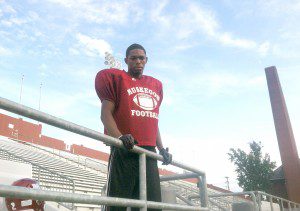 Hall says he would like to play Division 1 college football next season. (Photo by Mark Lewis)

“John’s a definite D1 player,” said Fairfield. “He’s a 185-pound kid who can carry 205 pounds. He’s certainly fast enough, and he has that tenacity to be a MAC (Mid American Conference) player. And some of those teams have been looking at him. I can guarantee you that by the middle of the season, the MAC is going to know who No. 2 is.”

And yet, Hall said both he and his teammates have a long way to go.

“We’ve got to get better,” said Hall. “There are still too many mistakes. We don’t always read our keys right, sometimes we put the ball on the ground…We always can be better. When you start to think that everything is ‘All Good’, that’s when you get beat. We can’t ever be satisfied. We have to always get better. That means we have to work harder.”

A lot of the motivation behind the Big Reds’ team goals in 2013 stems from last year’s 35-28 state finals loss to Birmingham Brother Rice. Talking about it now, Hall still seems shaken at the idea they lost that game.

“Last year was just disappointing,” said Hall, “that those seniors had to lose their last game.  It was disappointing for a lot of us. So we’re just trying to win today. You win today and the championships will come. We’re just focusing on winning today.”

“The ultimate goal, though,” Fairfield continued, “is to be conference champions, and then playoffs and it ends with the championship game. We want to make that climb to the very top but we don’t make that climb without dealing with Rockford first. If we don’t take care of business this week, what does Lowell mean next week? Or Zeeland East? Or Mona Shores? They won’t mean anything. We start looking ahead and we we’re going to slip up.”

For Hall, slipping up just isn’t an option. He says he understands, as he enters the first home game of his senior year, that he’s doing more than just playing games for the Big Reds. Hall is starting to think about a legacy.

“I want to be remembered here, like people thinking I am one of the best (players) to come out of here,” he said, his laughter growing steadily the closer he got to the end of the sentence.

As they say, mission accomplished, John.