FRUITPORT – Last year was supposed to be the big year for the Fruitport boys soccer team.

With a skilled crew of upperclassmen on the roster, the Trojans had great expectations. But there were a lot of dominant teams in the area in 2012, including perennial league power Spring Lake, and Fruitport finished a disappointing second place to the Lakers.

The 2013 season began with a lot of question marks for the Trojans. But Coach Greg Kobylak knew he could count on one thing – plenty of offensive firepower. 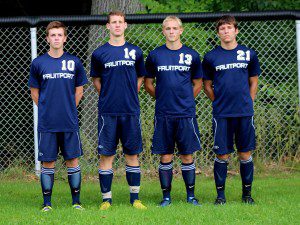 That’s because he had four returning seniors up front – Zach Gilson, Dalton Mullennix, Nick Carrier and Andrew Frost – who have been teammates on elite club soccer teams since they were 10.

The four have not disappointed, combining with sophomore standout Noah Hendricks for 65 of the team’s 75 goals this season. If they all stay hot, the team has a chance to topple Fruitport’s single season team record of 90 goals.

The potent scoring attack – combined with an improving defense and solid goaltending from Conner Deneen – has helped the Trojans secure a Lakes 8 Conference championship a year later than expected.

Fruitport blew through the regular conference schedule with a 6-0 record, then kicked off the conference tournament last week with a 4-2 overtime victory over Orchard View.

On Tuesday the Trojans will host Spring Lake in the tournament championship game, with plenty of pride on the line.

While the Trojans have already wrapped up the overall conference title, based on points already earned, nothing would mean more to the four seniors than another victory over Spring Lake, which has dominated the Lakes 8 for the past few years.

“To beat them two times in a row would mean so much to our team,” said Carrier. “Playing them is always like the biggest game for our team. Losing to Spring Lake (in the past) has never been fun. We’re always going to be pumped up to play them.”

Pacing the potent offensive attack is Gilson, a four-year varsity player who leads the team, and quite possibly the area, with 32 goals. He’s already in the top seven of all-time Fruitport goal scorers, and is closing in on the single-season school record of 35 goals.

“Zach’s turned into a pure striker,” said Kobylak, whose team is 12-3-3 overall. “He gets the ball in front of the net, whether he gets it there himself or gets it from someone else, and he knows how to finish it off. That’s what the term striker means.”

Mullennix has chipped in 10 goals while Frost has seven and Carrier has four. All three, who have been on the varsity squad for three years, are also on pace to finish among the top 25 all-time Fruitport scorers.

While Gilson and Hendricks lead the team in goals, Mullenix, Carrier and Frost have played big roles in setting up scoring chances this season, combining for 29 assists.

Carrier leads the team with 12 assists while Frost has 11 and Mullennix has six.

The three do the much of grunt work in the midfield area and in the corners, often setting up Gilson to finish the attack with his powerful shot.

“With teenage boys, sometimes that’s a hard sell, sacrificing individual goals for the good of the team,” Kobylak said. “But these guys realize the value of setting up teammates and not just finishing it off.”

Kobylak appreciates having four seniors who have played together for many years and have grown up competing against elite competition.

“They’re lucky to have played really elite club soccer in the offseason with really great coaching, and they’ve taken advantage of that and developed,” he said. “There are teams with more skilled players than us, but these guys are really fast and really athletic and work really hard.

“We take advantage of our strengths. We didn’t have many question marks about the offensive attack. We knew we would have plenty of pop. We’ve had to outscore teams pretty much.”