MUSKEGON – The Muskegon Lumberjacks’ penalty killing unit struggled through the first three games of the season, and Coach Todd Krygier wasn’t happy about it.

Then Mason Jobst returned to the lineup Friday night, and things got better fast. 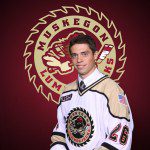 The Lumberjacks (4-1 on the season) killed six penalties en route to a 3-0 shutout of the Fargo Force. After the game Krygier said Jobst’s presence made a big difference.

“That’s my thing, ever since I was a little kid,” said Jobst, 19, a native of Indianapolis. “I’ve always been kind of defensive-minded. I really enjoy blocking shots. It’s a good feeling when you block a shot.”

Jobst feels good just to be playing hockey again. He was disabled throughout the offseason following shoulder surgery in May, and wasn’t cleared to return to action until last week.

The summer was a miserable experience for Jobst, who wasn’t allowed to skate at all until August.

“That was the first time in my life I did that,” he said of his three months off the ice.

He was able to participate in training camp, but no contact was allowed with teammates. He had to sit and watch the Lumberjacks’ four exhibition games and first three regular season games.

So when he hit the ice on Friday, he said it was an “unbelievable feeling.”

“It was extremely difficult (sitting and watching the first games), but I think it was good for me,” Jobst said. “It just made me more hungry to get back on the ice. Now I know how bad it feels to not be able to play, so I try to treat every game like it could be my last.”

He demonstrated his worthiness last season, playing in every game for Muskegon despite hurting his left shoulder in October and fighting through the pain throughout the schedule.

That was the injury that led to his surgery in May.

“It was a subluxation, not a dislocation,” Jobst said. “With a dislocation is pops out and stays out. Mine kept popping out of the socket and going back in. It was a long season. I tried to hide it as much as I could, but when it came out during a game it was pretty hard to hide it.”

Despite the discomfort, Jobst earned a reputation as an adept defensive center, which means he specialized in killing penalties and keeping the opponents’ top lines from scoring too much.

“I was always put out there to defend and protect,” he said.

That doesn’t mean Jobst can’t score. He had 9 goals and 14 assists in only 26 games for Indiana in the North American Prospects Hockey League in 2011-12. And last year, despite his role as a defensive specialist, he still managed 6 goals and 18 assists.

He thinks he will be counted on to put the puck in the net more this season.

“That wasn’t my role last season,” he said. “But I grew up a scorer, and I think things have changed a bit this year. I think I will be looked to at the end of games to get that big goal.”

Leadership will be another new role for Jobst this season. He was chosen to be a team co-captain, a role he takes very seriously with this year’s younger, less experienced team.

“It was a real honor to be chosen,” Jobst said. “I’m real excited about it. But I think I’ll just keep doing what I’ve been doing and try to lead by example.”

While Friday’s victory was exhilarating for Jobst and his teammates, the tables were turned Saturday night when the Lumberjacks dropped a 2-0 decision to Fargo, their first loss of the season.

With so many first-year players on the team, some might wonder if the frustrating defeat might throw the Lumberjacks off their game. But Jobst said the team is already focused on bouncing back.

The Lumberjacks are on the road all weekend. On Friday they’re in Green Bay, where they won on opening night this season, and on Saturday they visit Dubuque, the defending Clark Cup champion.

They return home to the L.C. Walker Arena Oct. 18-19  for a pair of games against Sioux Falls.

“We’ve kind of forgotten about last week,” Jobst said. “We had two great practices this week. We’re trying to take it one game at a time. This weekend will be a good chance to see where we’re at against the defending champs.”

After weeks of uncertainty, Ironmen set to open home season on Saturday night

Kent City volleyball team gets off to good start, then falls to White Cloud in league play