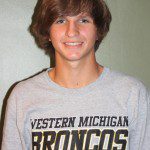 Nate Hoover, a junior from Mona Shores, signs to play soccer for Western Michigan University in 2015.

In the morning he accepted a soccer scholarship from Western Michigan University, which is a bit unusual because he’s only a junior with a year of high school to go.

That evening he and his fellow Sailors captured their second consecutive O-K Black Conference championship by beating Grand Rapids Union 1-0 in double overtime.

“It was amazing – definitely a good day,” said Hoover, who has been a varsity starter since his freshman season.

But Hoover and is teammates still have unfinished business.

They want to go a step farther than they did last season and win a Division 1 district championship. They made it to the district finals last year before losing the title game to Grand Haven.

The Sailors will open the tournament Tuesday at Holland West Ottawa. The winner will advance to a Thursday semifinal against the winner of Grandville and Grand Haven.

In the other bracket, Grand Rapids Union will play Jenison, with the winner playing Hudsonville in the semifinals.

The district title game will be Saturday. 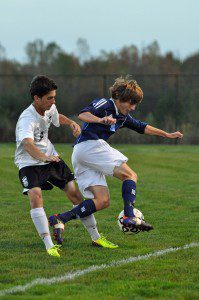 “I would say there are only a few teams (in the district) who can give us a hard time, and we’ve already beaten Grand Haven once this year,” Hoover said. “I think we have the ability to go on to regionals.”

Hoover will have the luxury of concentrating on high school goals from now on, without worrying about where he’s going to play in college.

He was surprised in August when he received a letter with a scholarship offer from WMU. He said he visited several other colleges, including Michigan State University and Oakland University, but Western was “the right fit.”

Securing an athletic scholarship a year early doesn’t happen every day. Hoover has the advantage of years of experience playing for elite travel teams, including the past few years on the Grand Rapids Crew Junior U17 squad.

“(College recruiting) is getting earlier and earlier for players of Nate’s caliber,” said Mona Shores Coach Jeremy Leffring. “I know several of his teammates on his junior team have already committed to different colleges.”

One might expect a soccer player with an early scholarship to have impressive scoring statistics. But Hoover, a center-midfielder, only has four goals this season.

He specializes in setting up goals, with 17 assists this season and 42 for his varsity career.

“Nate’s a selfless player, a setup player,” Leffring said. “He doesn’t have a care in the world about statistics. He’s not a guy who’s going to stand up front and wait for the ball. He’s going to receive the ball and set up a play for someone else.”

Hoover is also an outstanding two-way player, according to his coach.

“He’s usually the first one to get back defensively,” Leffring said. “There’s nothing better than having your best player also be your hardest worker. He’s not one of those kids you’re going to replace. You just enjoy him while you have him.”