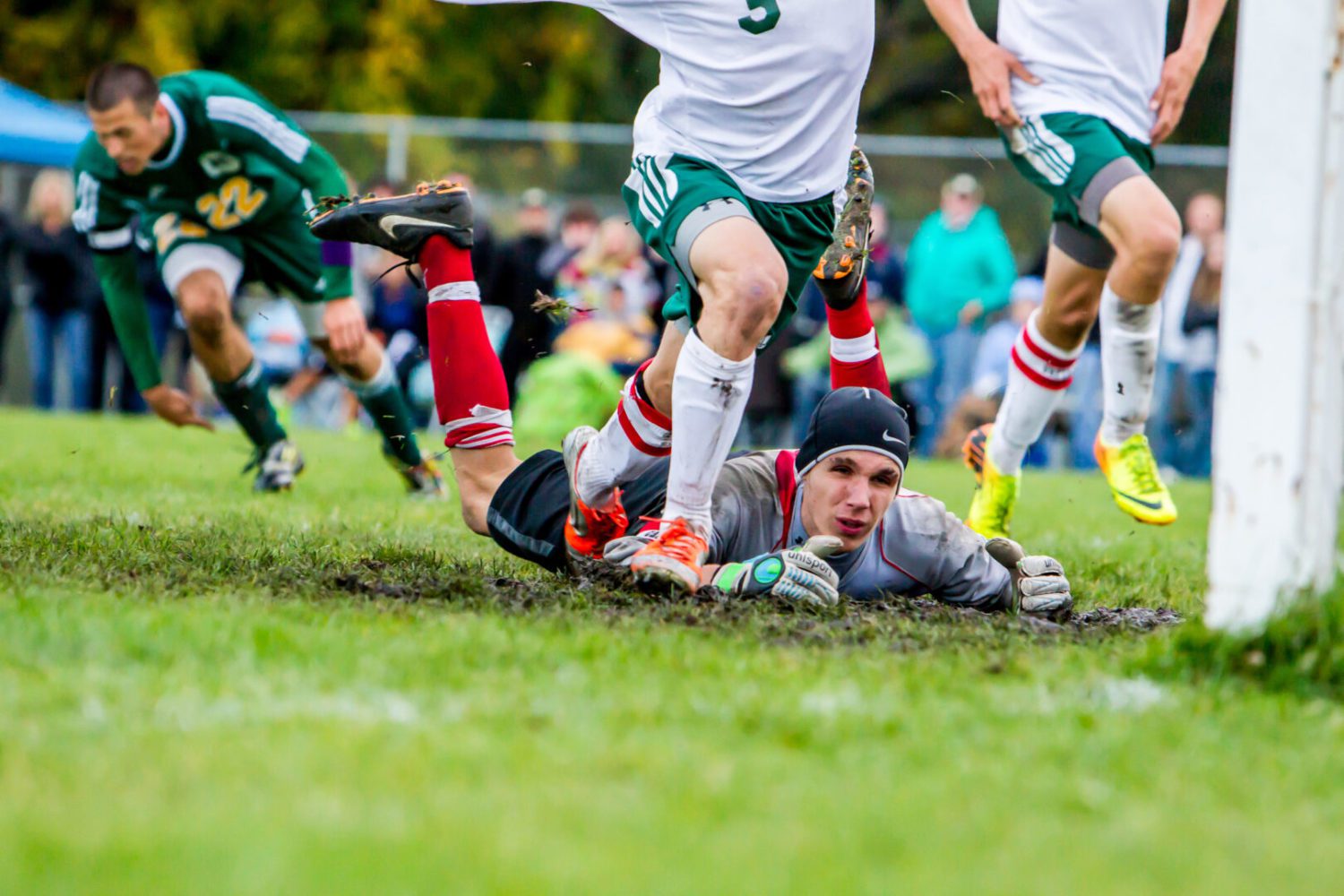 It was another instant classic on the soccer field on Thursday.

And this time around, it was the Muskegon Catholic Crusaders who came out on top in a 2-1 Division 4 district soccer victory over rival  Western Michigan 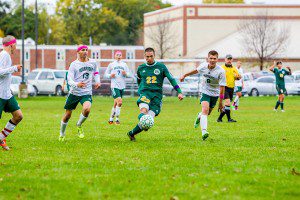 Adam Callow connects for the first of his two goals. Photo/Tim Riley

Christian. It was the third meeting of the season between the River Valley Conference rivals.

Adam Callow scored both goals for the Crusaders, one in each half.

“Congratulations to (Muskegon Catholic coach) Bill (Moulatsiotis) and his boys, they came to play and they played really hard,” WMC coach David Hulings said. “They lost to us pretty bad the last time and they came out to prove they are a good team. And they are an excellent team.”

WMC’s Chaise Schuiteman had the first good scoring chance of the game when his header rang off the post with 8:30 remaining in the first half. 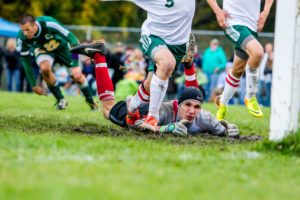 WMC’s keeper can only watch as the ball from Adam Callow finds the corner of the net. Photo/Tim Riley

Less than a minute later, Callow lofted a long, high shot that sailed into the goal. And that’ how the first half would end.

In the second half, WMC came out strong and nearly scored early. Sweeper Alex Rop found Ben Mast on the run and his shot was saved by MCC goalkeeper Todd Hall.

With less than 31 minutes left in the half, Mines turned a solid individual effort into a goal for the Warriors.  He sidestepped one defender and beat another before putting a low shot behind Hall.

With 13 minutes remaining, Erik VanFossen nearly broke the tie with a shot that narrowly missed slipping inside the far post. 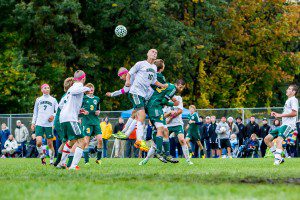 Callow struck again with 5:19 remaining when he got loose and rolled a shot through the mud in the goal mouth and into the net.

Then came controversy that led to the side official waving off a tying goal by the Warriors. Mast dropped a pass to Schuiteman, who launched a high shot that rang off the crossbar. A hard charging Mast beat everyone to the ball and chipped it into the net. As the Warrior faithful were celebrating, the official on the sideline called Mast for offsides. Had Schuiteman scored on that goal, it was Mast who would have drawn the assist. That’s what drew the ire of Hulings.

“It’s difficult to walk off the pitch when the guy who would have been given the assist was called for offside, so it was very tough,” Hulings said. 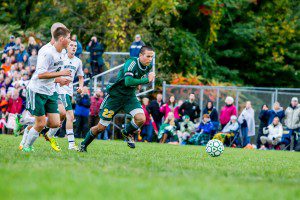 Hulings did receive an explanation, but was still left shaking his head.

“That was a very tough loss for us,” said Hulings. “In all the years I’ve been coaching, this is the toughest loss I have ever experienced in my life.”

Three minutes later, the Crusaders were celebrating the victory and a spot in Saturday’s 1 p.m. district final game.

“This was a great battle that should not have been decided the way it was decided,” Hulings said. 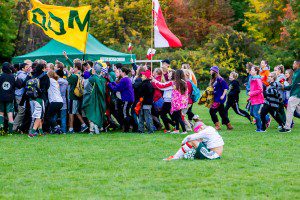 MCC fans celebrate as a dejected Warrior collects himself on the pitch. Photo/Tim Riley

The game also marked the end of an era where the Crusaders and Warriors battle three times, two in the regular season and one in the tournament.

Next year, MCC will be competing in the Lakes 8.