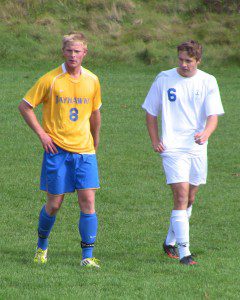 But the Ancilla College Chargers ruined the party by the narrowest of margins.

Forward Dominic Harris got behind MCC goalkeeper Loghan Stong and tapped in a goal midway through the second half, giving Ancilla a 1-0 victory over the Jayhawks at Orchard View High School.

The loss left MCC and Ancilla tied at the top of the Michigan Community College Athletic Association standings with two losses apiece.

The Jayhawks, who have completed their regular season schedule, still have a chance to win the outright league title because Ancilla has one game left against Jackson Community College.

A loss or tie by Ancilla would leave MCC on top. An Ancilla victory would mean a split title between the two teams.

While the Jayhawks would have preferred to clinch the top spot for themselves Sunday, they’ve still accomplished a great deal this season. The MCC soccer program is only in its third year, and 20 of the 26 players on the roster are freshmen.

MCC Coach Ben Ritsema is proud that his team will at least be a co-champion, regardless of what happens the rest of the season.

“We’ve done a lot of great things in three years,” said Ritsema, whose team is now 12-6-0 and 6-2 in conference play. “We have an extremely young team, and I knew we would have our bumps and bruises along the way. I thought we would improve and be a team you didn’t want to play by the end of the season.

“I had expectations, but I didn’t think we’d be conference champions.”

Goals were hard to come by for the Jayhawks and Chargers Sunday.

Both teams had chances to score in the first half, but Stong and Ancilla goalkeeper Rene Meija both came up with big saves to leave the match scoreless at halftime. Stong was coming off two shutouts last week, which earned him the National Junior College Athletic Association’s Keeper of the Week” award.

The majority of the second half was played in the MCC zone, with ncilla applying constant pressure and the Jayhawks struggling to clear the ball. 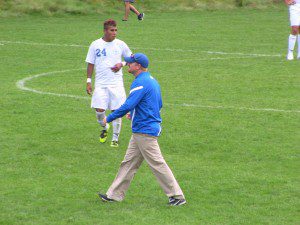 Harris scored the only goal with 21 minutes remaining. Strong came out to challenge Harris as he approached the goal, then dove for the ball and missed, leaving Harris to tap in the easy score.

The Jayhawks finally got a few scoring chances in the last seven minutes, but failed to convert.

“In the second half we struggled with our possession game a little bit,” Ritsema said. “I’m not sure what the hang up was. If we didn’t give up that goal I think we might have been able to relax a little more. I think we played a little uptight and pressured after that.”

The score could have easily been worse. The Jayhawks were strong defensively, challenging Ancilla’s attackers and knocking them off the ball all afternoon.

“Our strength has been defense all year,” the coach said. “It’s kept us in every single game.”

MCC’s rally hopes were hurt when leading scorer Riley Kammeraad had to leave temporarily with a twisted ankle with 13 minutes remaining, then was forced out of the rest of the match 10 minutes later with a separated shoulder.

“He’s a threat to score every time he touches the ball,” Ritsema said of Kammeraad. “So when he’s not on the field it’s an issue.”

“They have a great team,” said Ancilla Coach Adam Hall. “They made it hard for us today. We had better chances than they did. Soccer is a crazy game. One moment can win a game sometimes. I feel good for our guys because overall I thought we had the better chances and deserved to win today.”