By day, the trio is as polite as they come. But come game time, Gannon, Fairfield and Rhyndress exhibit a sudden change in personality

NORTH MUSKEGON – It may be a well-worn trope, but North Muskegon head coach Mike Belmonte insists that it’s true in this case.

That is, Belmonte has seen with his own eyes the change in a trio of his players as game time approaches. 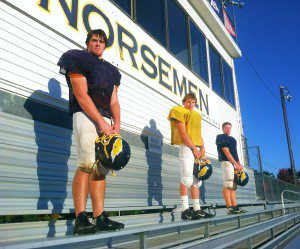 ““All three love their mothers, treat their mothers like they are queens,” said Belmonte, about senior two-way players Justin Fairfield, Ryan Gannon and Aidan Rhyndress. “During the week it’s ‘Yes, sir,’ ‘No, sir,’ ‘How can I help you?’ From Monday to Friday they are great role models for the little kids in our district.”

But don’t be fooled about the politeness, the National Honor Society memberships or even the amount each loves his mother; once they take the field, these three lineman become brutal doppelgangers of themselves.

“Then comes Friday night, and the whistle blows and the ball is kicked,” Belmonte continued. “Those three just get nasty. And it really, really surprised me with how nasty they get. Nothing cheap, nothing dirty, they just play hard and with a stubborn attitude. They get really nasty, really physical. And because I know them (off the field), I guess I just didn’t see it coming.”

The three big-nasties – Gannon and Rhyndress at offensive tackles and defensive end spots, and Fairfield at center and defensive tackle – lead one of the area’s most surprising teams this season. North Muskegon now sits at 5-1 overall and 4-1 in the West Michigan Conference, and if the team wins out the final two league games, a share of the West Michigan Conference title is in the cards. One more win and the team will earn its first playoff berth since 2006’s 8-4 campaign.

And to think, the program was a winless 0-9 just two seasons ago.

The program’s change in direction, said Belmonte, has to do with grooming players like Gannon, Rhyndress and Fairfield to play up to their full potentials. Now that they are doing just that, the three have become the team’s rock.

For Rhyndress, playing football is a release. 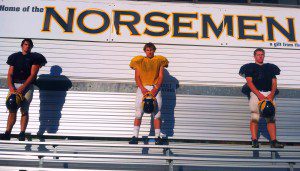 “It kind of builds up over the week, and on Friday night we’re able to go as hard as we want between the whistles,” he said. “And that’s pretty cool.”

“Everything that goes on during the week,” said Gannon, “all the problems, it’s a relief to have Friday night to be able to just take it out in front of all your friends and family.”

Fairfield looks at it like a job he wants to do well.

“It’s a business,” said Fairfield. “We have a job to get done out there.”

While the team’s resurgence indeed has a lot to do with getting players to play with the kind of intensity needed to be competitive in the West Michigan Conference, another element is reminding the team of the Norse tradition, of reclaiming lost ground.

“Look it up – we have the most wins in the conference (over the past 60 years),” Belmonte explained. “There is tradition here. The last 15 years or so that’s been turned around a little bit and Montague and Oakridge have had the best of it. We aim to change that, we aim to get back to where North Muskegon has always been. We don’t consider ourselves to be underdogs.” 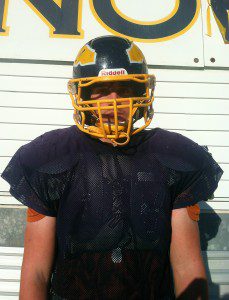 Any full return to glory for the Norse would include the ability to play among the best teams in the West Michigan Conference. The first test for them on that front happened in Week 4, as the team failed to protect a 7-0 first-quarter lead versus then-unbeaten Oakridge, allowing a 29-point second quarter in what turned out to be a 43-7 loss.

For the Norse, the defeat was more a wake-up call than a revelation that team was no good.

“We never quit playing, and we did some nice things (versus Oakrige),” said Belmonote.”But we beat ourselves.”

Fairfield said the team, instead of sulking, realized that the loss was a sign the squad needed to keep working.

“It was a benchmark game of where we were at and where we need to get better,” he said. “It was a hard lesson but it was also a gut check for us.”

Things don’t get any easier for the Norse the rest of the way. This Friday, Montague comes to town riding a 12-game winning streak over the Norse. 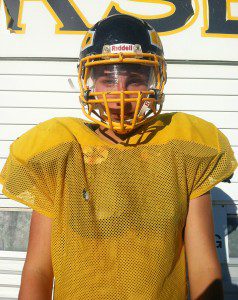 Not that the three linemen are counting.

“We want to win the conference,” said Gannon. “That’s been our goal since Day 1. That means beating Montague and (Week 8 opponent) Shelby. Our destiny is in our hands.”

Fairfield adds gruffly, “We’re going to win all of them. It’s that simple.”

Coach Belmonte believes that instead of focusing on three tough opponents (the Norse finish the season with an undefeated Maple City Glen Lake squad), he’d rather focus on his club.

“We firmly believe that it’s all about us and what we do,” he said. “As long as we don’t turn the ball over, play smart, play physical, and do our job, we can beat anybody. If we don’t do those things, we can get beat by anybody. That’s what we’ve been preaching for two years now. It seems to be working for us.”

Belmonte does point out, however, that the Norse are going to have to figure out a way to deal with Montague’s impressive team speed.

“What sticks out about them is their speed,” he said. “I’m not sure we’ve faced as fast a team this year.” 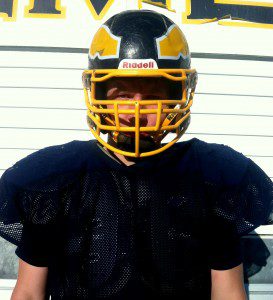 Improving the team’s overall speed and strength – to better compete against the Montagues and Oakridges and Shelbys of the league –  is something the teams has attempted to do since last fall.

“We took a one-week break after the end of last season,” said Rhyndress. “After that it’s been strictly football.”

Well, not strictly football, as all three participate in track and field, with Gannon and Fairfield playing basketball for the Norse as well. All the effort means the trio never really got out of playing shape.

Thus, they came into their senior season ready to go. Belmonte said as high a level the trio played last season, they are finishing their careers on an absolute tear.

“All three have notched it up a level,” said Belmonte. “Now that they are seniors, they realize they don’t have a lot of time left. They want to go out the right way.”

“There’s a lot of pride that goes into doing this,” said Gannon about playing for the Norse. “There is a long history here that people respect. It’s cool to be a part of that.”

“A lot of people expect North Muskegon to win,” added Fairfield. “Starting with us.”

This Friday, the Norse look to stop a 12-game losing streak versus Montague. Photo/Mark Lewis

“You don’t get kids like this every year,” Belmonte lamented. “So we’ve really enjoyed having them. It’s going to be hard to see them go. They are the heart of this team.”

And, for at least three more Fridays, the beat goes on. 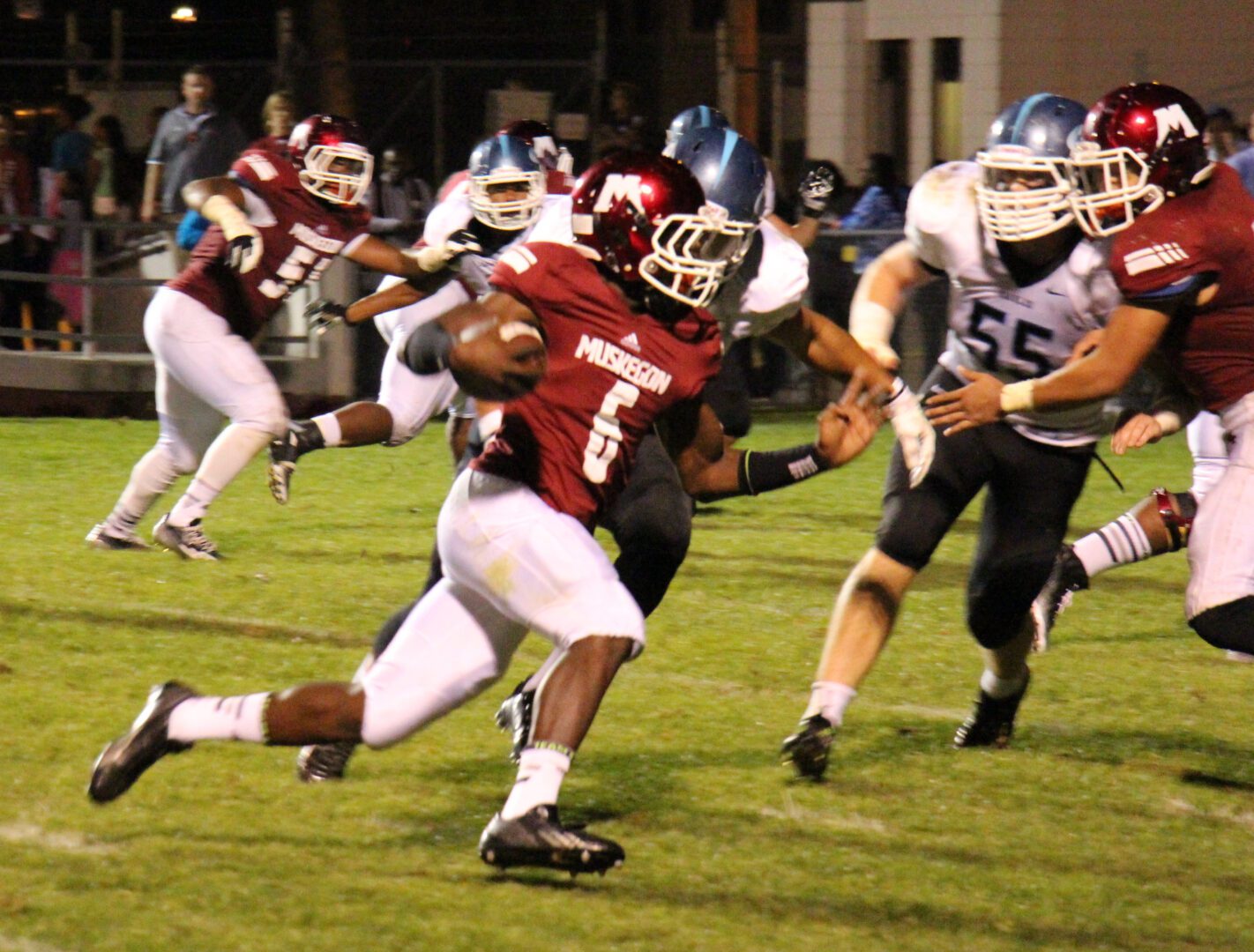