SPRING LAKE – After four-straight playoff appearances, the 2012 Spring Lake football team was stunned in Week 9 by Shelby, falling 14-8 to the Tigers, and falling to secure a sixth win and an automatic playoff berth.

One year later, the Lakers finished the regular season with an 8-1 record, 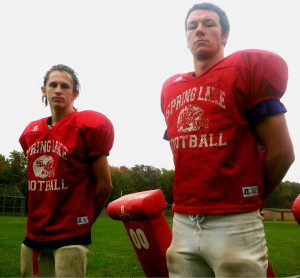 nabbing league wins over Fruitport and Grant (which were narrow losses a year ago) and a Lakes 8 title.

The Lakers take on 6-3 Belding Friday night in the first round of the playoffs.

Two huge pieces in the team’s turn around are seniors Charlie Warber and Chase Slagboom. Some might say that Warber, a running back and safety, and Slagboom, a receiver and cornerback, represent the heart of the Lakers.

“On the field,” said long-time Laker head coach Jerry Rabideau, “both Charlie and Chase bring incredible energy and tenaciousness. They are high-energy guys. And they also share a telepathic ability to communicate without saying a word. All of our defensive backs have that. It’s almost like they’ve been playing together for five years on some college-level team. They complement each other so well.”

Following a 40-12 loss to Div. 2 Mona Shores in Week 2, the Lakers have reeled off seven-straight wins, including last week’s aforementioned 27-0 win over Shelby. In many ways, the Shelby win represents a culmination of sorts for a Laker team that were searching for a complete effort. It’s one thing to hold  the potent Shelby offense out of the end zone. It’s another to put up 27 points against the Tigers, the first team to do so this season.

“Our coaches game-planned really well,” said Warber, whose dad, Paul, played for Spring Lake in the early 1980s. “We listened, we flew to the ball on game day. It was a high-intensity week; we knew what was at stake. And we played with the most emotion we have all year.” 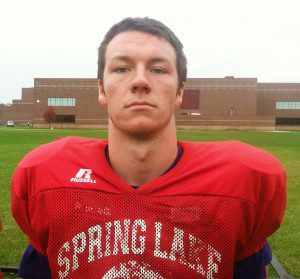 “Our defense really stepped up,” said Slagboom, going on to point out the Laker defenders allowed just 46 total yards against a Shelby offense that has confounded nearly everyone else. “Our offense was finally running on all cylinders, and we stayed away from the penalties. It was a game where we wanted to prove ourselves. We feel like we did that.”

Indeed, the win put a nice bow on the regular season, and earned a 10th-place ranking in the final state AP Div. 4 football poll of the year.

“Every facet of the game came together for us,” said Rabideau of the Shelby game. “Everyone came to play; it was almost like a playoff atmosphere around here. We feel like we are getting to the point where we are peaking. The Shelby win showed us what we can do when we turn it up a gear.”

Slagboom and Warber, in particular have turned up their play on the field. Not that the two weren’t already playing at a high level, said Rabideau. 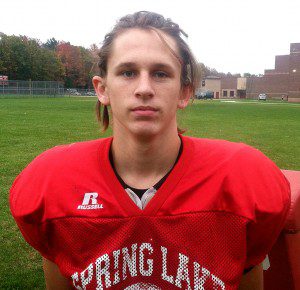 “I say this in a positive way,” Rabideau said with a smile. “Chase is our renegade kid. He doesn’t get in trouble or anything like that; he doesn’t cheap shot or late hit. But we call him the ‘Mamba’ for a reason. He’s slithery, but not dirty. He has a fire in the way that he plays.”

The coach said Warber is the yin to Slagboom’s yang.

“We always knew Charlie was going to be a very special player for us,” said Rabideau. “What he has transitioned into is a coach on the field. He is the leader, the general out there on the field for the other kids. And they respond to him because they recognize that he is a leader.”

Across the first four or five games, the team has been a study in contrasts. While the team’s defense was stout from the beginning, the offense has taken a little more time to coalesce.

“The penalties were just killing us,” said Slagboom.

“And we went through a lull mid-way through the season,” admitted Warber. “We came out flat versus Ludington, and they jumped on us in the first half. That was a big moment for this team. We had to come back, dig deep. It showed us what we can do if things don’t go our way. We battled through it.”

Through it all, the squad’s defense has carried the Lakers.

“Our front seven is one of the best I’ve ever played with,” said Warber. “Our defensive backs have been outstanding playing the ball.  And now that the offense is starting to cut down on the penalties, we’ve really improved over the second half of the season.”

“Our defense has been almost unstoppable all year,” said Slagboom. “And our offense is starting to pick it up now real big, too.”

Now that the regular season is over, the team has set its sights on more than just making the playoffs. The last time the team won a playoff game, 2001 – a year after making it to the Div. 5 state final game – Slagboom and Warber were barely out of diapers. But it isn’t a particular playoff loss that sticks in the craw of the two seniors; it’s the fact that the team failed to make the playoffs a year ago.

“It was a big setback,” Slagboom said of the loss. “We’d made the playoffs every year for awhile, so it definitely hit us hard. It helped us step into gear this summer, all the 7-on-7s and the conditioning. We were determined not to sit out of the playoffs again.”

“We didn’t want to go another year without making the playoffs,” said Warber. “Now we’re not satisfied with just a playoff game. We don’t want to lose on Grabinski (Field, the Lakers’ home stadium) again. I saw the faces of our seniors last year after losing to Shelby and I don’t want to feel that way…not there.” 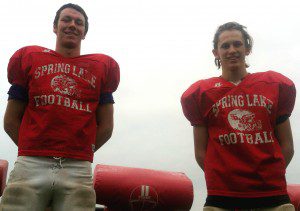 Yet, in order to log its first playoff win in over a decade, the Lakers will need to get past a game Belding squad.

“Big, physical, strong group of kids,” Rabideau said of Belding. “They put points on the board, they swarm to the ball, they go to the whistle. When you play them, you know they are going to come at you.”

“They have lots of size on offense, and they love to throw all sorts of different fronts at you,” said Warber. “They’re big on defense, too, but we’ve handled big before. That’s not something we are scared of.”

“We get past Belding,” Warber added, “we can definitely make a deep run.”

“Personally, I think we have a good chance,” said Slagboom. “We feel like we can handle the teams in our bracket; we match up with all of them. I feel like our defense can carry us all the way.”

Well, the Laker defense as well as the Laker fanbase.

“I know we aren’t the biggest football school, but our fans, our community believes in us,” said Warber. “They give us awesome support. Every home game they are there screaming and cheering for us. It makes a difference. It makes us feel like we are a ‘football school’.”

“We may not be the biggest squad of kids you’ve ever seen,” said Rabideau. “The thing is, we just don’t back down. When it gets to crunch time, these kids find another level. It’s amazing to see them out on the field, just busting out with Confidence. They always have that ‘We got this, coach’ attitude.”

Warber and Slagboom said they get their confidence from the unity among their teammates.

“It’s not all about the individual,” said Slagboom. “It’s about the team. That’s one of the big reasons I love playing this game. We’re in this thing all together.”

“I’ve played five sports since eighth grade,” noted Warber. “Football is all about family. You get close. Everybody is out here together sweating, puking during conditioning. You get to know these guys. It’s been great playing with them.”

Then he added, “Hopefully we’ll be playing together for a few more weeks.”