MUSKEGON – Will the real Muskegon Lumberjacks please stand up?

Last Saturday the Lumberjacks played one of their best games of the season, defeating first place Team USA in front of a happy home crowd. Earlier in the month they were equally impressive with wins over league powers Cedar Rapids and Dubuque.

But the team that looked so good in those victories seemingly disappeared Friday night.

The Lumberjacks were awful in nearly every phase of the game and suffered their worst loss of the season, 7-2, to the Green Bay Gamblers in front of 1,752 fans at L.C. Walker Arena.

Muskegon fell to 10-9-4 on the season, good for fourth place in the United States Hockey League’s Eastern Conference. Green Bay improved to 10-5-4 and pulled into a tie with the Lumberjacks with 24 points.

The Lumberjacks’ collapse actually began Wednesday in Green Bay, when they gave up three goals in the final 1:07 of the game and blew what had been a 1-1 tie.

“We had a kind of a breakdown that hurt us Wednesday night, and then I think I worked them a little too hard on Thanksgiving Day – out of frustration,” said Muskegon Coach Todd Krygier. “It was obvious tonight we didn’t have our legs, we came out flat and they took it to us.”

Krygier admitted that his team can look great one night, and then look, well, like it did on Friday.

“Consistency is important,” he said. “We have a young team. They have a good game and get relaxed instead of getting more intense and wanting to have another good game. You get in that comfort zone and you’re going to get your butt handed to you. That’s what happened to us tonight.”

The worst of the damage Friday came in the second period when Green Bay scored five goals – three on power plays and two in short-handed situations – to break open what had been a 1-0 lead.

Muskegon’s defense was almost non-existent, allowing the Gamblers to skate in alone on goal numerous times throughout the contest.

The Gambler’s power play success was a painful reversal for the Lumberjacks, who had only allowed two power plays goals since Nov. 15, and were 4-for-4 in penalty killing Wednesday in Green Bay.

But the Gamblers seemed to score almost at will on the power play Friday.

Green Bay’s Ryan Lough scored the only goal of the first period, taking a pass in front of the net and blowing it past Muskegon goalie Eric Schierhorn.

Then came the painful second period.

Green Bay’s Evan Tironese started the onslaught with a power play goal just under two minutes into the period. Lough added another power play marker less than a minute later, skating in alone on Muskegon goalie Eric Schierhorn and putting it between his pads.

The Lumberjacks switched goalies at that point, inserting Jordan Uhelski, but it did little good.

The Gamblers drew a two minute penalty with 14:08 remaining in the period, but somehow managed to score twice while skating a man short to take a 5-0 lead. Tironese scored the first shorthanded goal while Ryan Siroky netted the second.

“At that point it was quite obvious – the two (power play) units that had been fantastic for us lately, both units got scored on,” Krygier said. “That’s when I asked myself ‘what the heck is going on here?’ We will just have to battle back tomorrow.”

The game got chippy in the second and third periods, with several skirmishes and major penalties for both teams. Muskegon had 65 penalty minutes while Green Bay had 35. Muskegon’s Alex Toscano and Green Bay’s Mitch Snyder had game misconducts, while four different players were handed 10 minute misconducts. 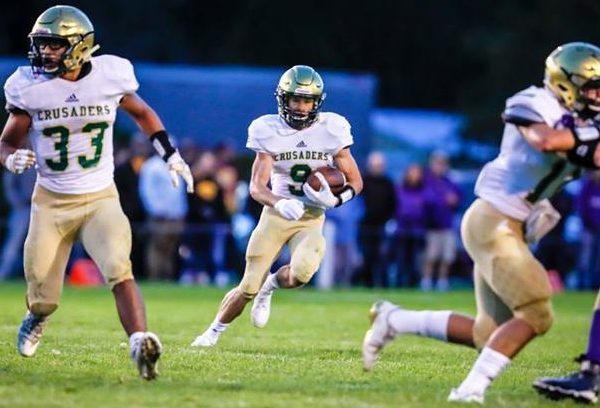