MUSKEGON – Older Muskegon hockey fans who went to the game last Saturday might have felt like they were in a time warp for a moment.

There was a Muskegon player with the last name of “Switzer” on his jersey, going toe-to-toe in a fight with a much bigger guy from Youngstown. 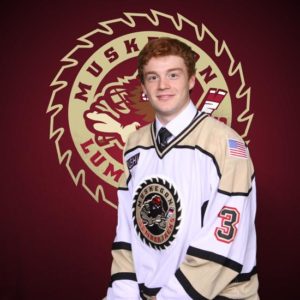 Chaz Switzer has committed to Miami (Ohio) University at the conclusion of his junior career.

It seemed a lot like the late 1970s, when Erle Switzer, a forward for the old Muskegon Mohawks, dropped the gloves with several bigger guys in the old International Hockey League.

But this was his son, 16-year-old Chaz Switzer, doing a great imitation of the old man.

The younger Switzer is six feet tall and weighs 180 pounds. His opponent, Youngstown’s Conor Lemirande, is listed at 6-6 and 230 pounds. But Chaz didn’t back down and landed a few blows before the refs jumped in and broke it up.

“He was a pretty big boy,” said Switzer, who unlike his teammates grew up in Muskegon. “We were kind of battling, I gave him a nice cross check, he kind of looked at me weird, then he grabbed my stick out of my hands. I just turned around, looked at him and dropped the gloves.

“I knew (how big he was), but it didn’t really process until I was on my way to the penalty box. I know I had to reach pretty high to connect a punch. It all happened pretty quick, but I felt fine. He only got me once, not very hard.”

Switzer said his father was at the game and saw the fight.

“He said I should pick on someone a little bigger next time,” he said.

A quick look at old statistics reveals that Switzer and his father are very similar on the ice.

Erle Switzer was 5-10 and 180 in his playing days, which is very close to his son’s size. He was in dozens of fights during his junior hockey years in his native Canada, but fewer when he turned pro and joined the Mohawks.

But like his son, Erle Switzer didn’t back down from bigger guys. The records show he often weighed 35 or 40 pounds less than his opponents.

Erle Switzer also had a knack for piling up penalty minutes, collecting more than 200 in three straight seasons with the Mohawks between 1978 and 1981. Chaz Switzer has only played in 10 games for the Lumberjacks, but already has 21 penalty minutes, which is third highest on the team.

Switzer admits he likes the rough style of play, just like his dad.

“I don’t shy away from it,” he said. “I’m not scared or anything. I think it’s my style of play – I’m kind of dirty on the ice a little bit – I know I like to rough it up in the corners. I actually love it.”

He admits his father helped him develop his fighting technique.

“He doesn’t necessarily like it when I fight, but I don’t think he hates it, either,” said Switzer, who has now been in two fights in his first United States Hockey League season. “He taught me everything I know. He’s been teaching me since I was young. We drop our stuff and he teaches me a lot of techniques, like how to square up, where to grab and how to keep my balance during a fight.”

Switzer, a junior at Mona Shores High School, wasn’t born when his dad played in Muskegon, but says he’s heard lots of stories.

“My dad always says he was not a big fighter,” Switzer said. “He says he was a big goal scorer, but that’s not true. I’ve always heard from other people that my dad had to stick up for the bigger guys on the team, that he wasn’t afraid of anyone, and that everyone liked him.”

Switzer said he’s similar to his father in one respect – while he doesn’t look for trouble, it’s sometimes necessary for players like himself to get physical with opponents, particularly when they’re harassing his teammates.

“There are times like when they spray your goalie, and it’s repetitive, you have to get a little rough with them so they stop charging the net,” he said. “You usually have go-to guys on the team, who don’t mind the nastier side of the game, who take care of things like that. You don’t want your goal scorers in the penalty box. I’m not the biggest guy on the team, but I don’t mind it.”

Despite his fondness for the rough side of hockey, Switzer is far more than a scrapper. He was a three-year standout with the Compuware bantam and midget teams in Detroit, where he developed a reputation as a solid stay-at-home defenseman.

He caught the eye of a Lumberjacks scout last winter, and committed to play with his hometown team last spring.

“It’s amazing,” Switzer said of playing in Muskegon, just minutes away from his family home in Roosevelt Park. “Once my season ended (with Compuware last year) I went to watch a lot of Lumberjack games. I kept saying to myself that it’s a lot faster and it’s going to be a lot of work.

“When I started practicing with the team in preseason it was a huge jump for me, and it took a while to adjust. I’m a lot more comfortable now, but there’s always a lot more to learn.”

As one of the youngest players in the league, Switzer’s playing time has been limited. He’s only been in 10 of the team’s 19 games, and is never sure when he will be in the lineup. But he said he was told before the season that part of his development would involve sitting out and watching how the older guys play.

“Sitting out is part of the process, so I can watch the other defensemen and see what they do,” he said. “I don’t really know when I’m going to play. It’s hard, but it makes you more hungry to play.”

Ice time won’t be a problem for Switzer in the future. He’s already made a verbal commitment to play college hockey for Miami of Ohio, where he will receive a full four-year scholarship. He said he was also recruited by North Dakota, Penn State and Dartmouth, but decided Miami was the right fit when he visited the campus.

“It’s going to be a great opportunity for me,” said Switzer, who added that he will play at least two years in Muskegon before making the jump to college. “I’m really fortunate. They have a great program.”

Two victories this weekend could leave the Lumberjacks on the brink of being in first place in the USHL’s Eastern Conference.

They are currently 9-7-3 on the season, following Saturday’s come-from-behind 4-3 victory over Youngstown. They have 21 points, which leaves them tied for third in the conference with Dubuque.