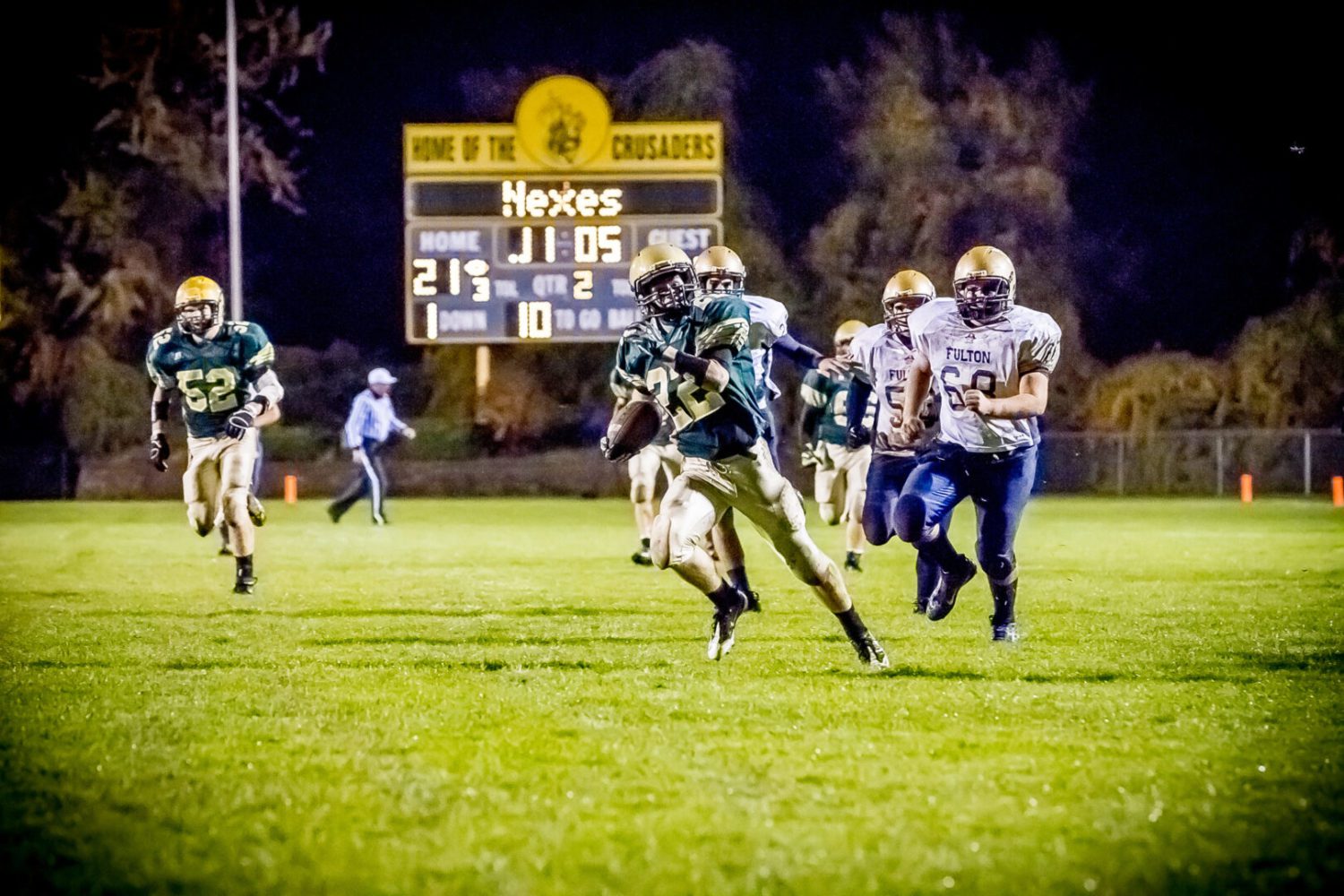 With six touchdowns on their first six possessions, the Crusaders started off its 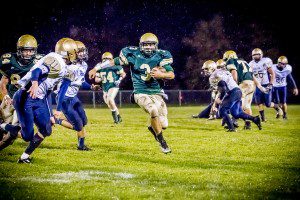 Nicholas Holt finds a seam for the touchdown run Friday night in the Crusaders’ Div. 8 opener versus Fulton. Photo/Tim Riley

MCC (8-2) will face Fowler, a 19-7 winner over Baldwin, next week at home in the district finals.

“The last eight weeks now we are really rolling,” Catholic coach Steve Czerwon said. “We had real nice execution, and we came out and wanted to make sure we hung onto the ball.”

After holding the Pirates (5-5) to no yards on its first three plays, the Crusaders drove 59 yards in six plays, taking a 7-0 lead as quarterback Nick Holt scored on a 14-yard run.

Fulton had three more plays for no yardage on its second possession, punting the ball away to MCC.

Holt’s opening score would come to look pedestrian compared to what Catholic Central would do for its next 28 points. 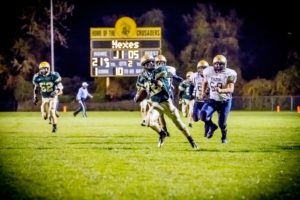 Blake Sanford completes the long catch and run for his 2nd receiving TD of the night. Photo/Tim Riley

The Crusaders would average over 55 yards a touchdown on its next four scores, striking twice through the air and twice on the ground.

“There was no doubt about who the better team out there was,” Fulton coach John Winkler said. “We would have liked to have tested them more, but early on we knew the talent difference was bigger than we had hoped. That’s a very good team.”

Holt took advantage of a Pirates defense determined to stuff the run, connecting on his first pass attempt with a deep strike to Blake Sanford for a 55-yard score and a 14-0 lead with four minutes remaining in the opening quarter.

“When we went in motion the cornerbacks and safeties would come up (to stop the run),” Sanford, who finished with two receptions for 116 yards, said. “The coaches noticed it and called the right plays.” 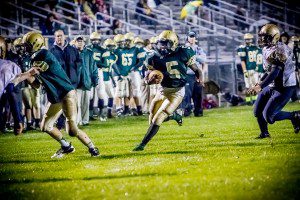 After another 3-and-out from the Pirates, runningback Alex Lewandoski broke free for a 49-yard TD run and a 21-0 lead at the end of the first quarter.

MCC finished off the first half with Sanford taking a short pass from Holt, breaking free of a tackle and weaving-in-and-out of the Fulton defense for a 61-yard score, and Holt rumbling in from 56 yards out for a 35-0 halftime lead.

The Crusaders went to the break with 331 total yards of offense, averaging 17.4 yards per play, while the defense held the Pirates to 35 total yards and four first downs.

“Part of our game, we can use our speed,” Czerwon said. “(And, defensively) our kids take a lot of pride in holding teams to 3-and-out’s.”

Catholic would start the third quarter right where they left off, going 65 yards in six plays, with Tommy Scott scoring on a 4-yard run for a 42-0 lead. On the drive, Scott caught a pass for 12 yards and carried the ball four times for 39 yards. 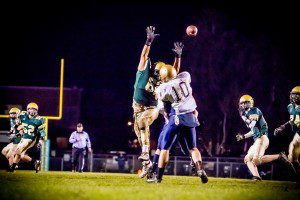 With the starters out for MCC much of the second half, Fulton took advantage, padding its stats and scoring 14 fourth quarter points.

“Well, the first team defense wants the shutout but the JV kids were brought up to play,” a smiling coach Czerwon said.

MCC finished with 418 total yards, 290 yards on the ground, led by Lewandoski with seven carries for 108 yards.

“Our offensive line came out and blocked really well,” the senior back said. “We executed and (on defense) our defensive line and linebackers played great.”

The Crusaders limited Fulton to 178 total yards, 169 on the ground and nine through the air.

Holt finished 3-of-4 passing for 128 yards, and carried the ball five times for 88 yards. Scott had 65 yards on eight carries. 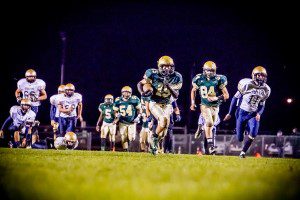 Lumberjacks woes continue, give up four in third period in loss to Team USA