SHELBY – In a game that featured more offensive, defensive and special teams fireworks than an average team’s entire regular season, it was strange that Friday night’s game between Shelby and Montague in Round 1 of the playoffs came down to a single lineman.

Shelby’s Kevin Brink recovered a Montague fumble in the end zone to put his team on top 28-17. Photo/Mark Lewis

You read that correctly, a single defensive lineman.

You know, the guys who vanish into the background during a running back’s long TD run, or during a receiver’s long TD catch.

You know, the guys doing the heavy lifting.

Montague, energized by a goal line stand that denied host Shelby the put-away score late in the fourth quarter, and down by just four points, faced a 92-yard drive if the team was going to have any chance of winning.

But then Shelby’s Kevin Brink, all 280 pounds of him, showed everyone in the stadium what he could do with the rock.

For once, a lineman got a chance to shine.

Montague fumbled at around the two yard line, right in front of Brink, who scooped it up, fumbled it into the end zone and regain possession for the score to put the Tigers up 28-17.

“We knew what we had to do in that situation,” said Brink, whose only other time in the end zone was 22-yard interception return at Ravenna his freshman year. “They dropped the ball on the turf, and as soon as I saw it I picked it up, dropped it, and picked it up again in the end zone. It worked out.”

Indeed it did work out for the Tigers (9-1), as they now move on to face Grandville Calvin Christian (7-3), which outlasted Grand Rapids NorthPointe Christian 14-12, next weekend for the district title.

Montague finishes another fine season with a 7-3 record.

Although the final score, 35-23, might not look that close, this contest could have gone either way.

Montague came out on fire,  as the Wildcats’ Alex VanVleet picked off Shelby QB Andy Fortier’s first pass of the  game, giving Montague the ball on the Tiger 39. Eleven plays later, Wyatt Ford knocked home a 20-yard field goal into the windy rain to put Montague up 3-0.

“I had to stay patient,” Shelby head coach Lorenzo Rodriguez said of the interception. “I like to throw it around the park a bit and get a couple quick scores. But it was a matter of sticking to our guns and staying patient.”

Shelby quickly made it 7-3 – set up by a 60-yard return by the Tigers’ Devin Mussell – after David Guerra scored from four yards out.

It look like a rout was at hand – much like when the two teams met in Week 4, which Shelby easily won 33-7 – when Mussell turned a short gain into a 33-yard TD scamper to make it 14-3.

But the Wildcats weren’t going away that quick.

With under two minutes left in the first half, the Wildcats went ahead when senior back Chris Carroll barreled in from 12 yards out to make it 17-14 at the break.

Montague was driving again for a score while the first half ticked down, and Ford was forced to attempt a long field goal, which never really gained flight.

“At half time,” said Rodriguez, “after they put up some scores on us, we told the kids emphatically, “Hey, those weren’t off long drives or anything; it was just a couple of big plays. Don’t fall into their trap. Let’s go and finish them off.”

But the Wildcats refused to yield.

Montague looked like it might go ahead by 10 as Brandon Wemple broke up the middle to return the opening kickoff of the second half to the Tiger 30. However, Wemple fumbled as he was being tackled, and Shelby senior Forrest Courtright recovered.

Officials ruled that Wemple lost control of the football before his knee hit the ground.

“It’s hard when you give it right back,” said Montague head coach Pat Collins. “It was a close call. We all thought (Wemple’s) knee was down. But that’s how it goes in high school football. There’s no instant replay. You just have to play through it.”

On Shelby’s first play after the turnover, Mussell broke free around the left end and ran for the 73-yard score to make it 21-17.

It was a stunning reversal.

After both teams failed to score again in the third, Shelby unveiled a 15-play drive, down to the Wildcat one, and looked only moments away from going up by 11. 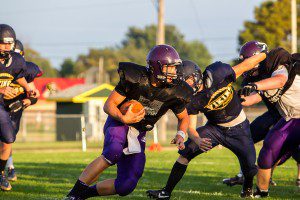 Then came Brink’s huge fumble recovery in the end zone.

“That was huge,” said Fortier. “They grabbed the momentum by stopping us after we had first-and-goal on the one. The football gods were watching over us. We deserved something.”

But the game wasn’t over.

With around three minutes left, Montague’s sophomore QB Jacob Buchberger, who was a thorn in the Tigers’ side all night long, connected with Ford on a 42-yard pass, setting up a five-yard Buchberger TD run that cut Shelby’s lead to four. The ensuing two-point conversion failed, as did Montague’s attempt at an onside kick off recovery.

The Tigers finally put away the game with two minutes remaining, when Guerra broke free for a 49-yard TD run, providing the final result.

“Tonight’s ball game, we knew that they were going to bring it,” said Rodriguez. “That’s an experienced program over that, and Pat (Collins) and his staff do a great job running it. We knew they were going to come at us with everything they have and we would be tested to withstand their effort with our own.”

“We talk every day about being a family,” said Brink. “Being one, being together. So when it gets tough out there, everything is hitting the fan, we know we can expect to pull together. That’s what we did tonight.”

“It took an unbelievable effort tonight,” said Fortier. “Like our (coaches) say, ‘We have to stay on the same side of the fence.’ We preach that every single day we are together. Everyone gave everything they had. That’s been our motto all week, ‘(Give) Everything you got.’”

Despite the loss, Collins thought his team’s never-quit attitude showed real growth after a rough start to the season. 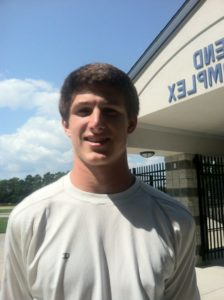 “They were just playing Montague football, for each other,” said an emotional Collins. “Earlier this year, right here on this field, things didn’t really go our way. We didn’t really respond the right way. Tonight, we responded the way we knew they could all season. Everyone has grown so much, especially the seniors. They took the early losses and recommitted themselves. They said, ‘We’re going to turn this into a football team.’ They weren’t going to let those ups and downs get in the way anymore. I’m so proud of the way they played tonight.”

While the Wildcats’ ride ends, Rodriguez feels his team’s has just started.

“It’s been a great run so far, and the kids are just enjoying it, getting hungrier and hungrier,” said Rodriguez. “That’s our game plan: to get the kids to peak at the right time.”

Brink said his squad’s level of unity will need to increase every single time it takes the field.

“We are going to need to pull together even more and get better every single week if we want to make a deep playoff run again,” he said. “If we do that, we know we can go all the way.”

The two quarterbacks, Buchberger and Fortier combined for just 7-for-22 passing in the wet and windy conditions.

Montague’s Cameron Brayman, who is just a sophomore, was all over the field again Friday night, finishing with a game high 15 tackles, while teammate Ben Rupert had 13 stops and Brett Bumpus added 10 in the loss.