SHELBY – Nobody wants to come away from a state semifinal football game the loser.

But, though it might not seem like it at the time, that kind of loss can reap benefits further down the line.

The Shelby Tigers enter Saturday’s Div. 6 semifinal game with Clinton (12-0) the decidedly more experienced club after falling last year to the still-undefeated Ithaca Yellowjackets (54 games and counting) by a 31-14 score.

“I just get the feeling that this team is in a different place than last year,” said Shelby head coach Lorenzo Rodriguez. “It was all new to us, including us coaches. This year we’re all handling things like we’ve been here before, because we have.”

If you know anything about football, that kind of confidence is contagious in a locker room. With every game, the Tigers look more and more like, well, Ithaca.

“They’re going to go from a spread look to a two tight end set,” said Rodriguez. “They have good speed and they use a lot of traps. They’re tough to stop, but if we line up in the right spots, we can be in position to stop it.” 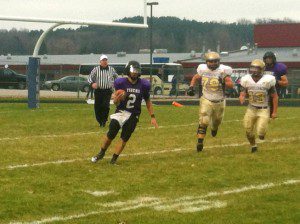 On the other side of the ball, Clinton will have difficult task of challenging the innovative Shelby offense, led by quarterback Fortier. Guerra, Mussell and Courtright form a three-headed Shelby rushing attack, while wideout Unger and tight end Brody Lee will try to keep the Clinton defenders on their toes.

The ‘Skins run a defensive scheme similar to last week’s opponent, Schoolcraft, a 4-4 look with an attacking style which often utilizes edge pressure. That pressure on the edges, provided by outside linebackers who become additional defensive linemen, will only increase, said Rodriguez, with Clinton forcing the Tiger backs up into the middle.

The fullback Courtright could have a whale of a game in that scenario. 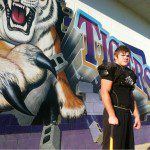 Shelby senior Forrest Courtright could have a big day rushing the ball up the middle if Clinton tries to put pressure on the edge. Photo/Mark Lewis

This will be the first time the Tigers will be on the road since Week 7 at Ravenna (Shelby is 4-0 on the road this year), though Rodriguez said it shouldn’t affect his squad.

“It’s more about focusing on the game and letting the other things take care of themselves,” he said. “It’s not like we have another eight-hour trip in the bus (like last year’s regional title game at Neguanee). It’s only a half hour away. We’ll get up Saturday morning, get on the bus and get there in plenty of time to get the kids ready to play.”

And here’s where experience factors in. While Shelby’s trip last year to the semifinals (the school’s first) is still fresh in everyone’s memory, Clinton’s one-and-only semifinal game was in distant 1990, a 22-7 loss to Galesburg-Augusta (which, incidentally, fell to Muskegon Catholic 21-7 in the state finals). Rodriguez thinks this is an advantage he’d like to exploit.

“It’s time to handle our business and play as well as we can,” he said. “If we come ready to play, we’ll do that.”

Three Questions with Shelby Head Coach Lorenzo Rodriguez …after his team’s opening-round victory over Montague to kick off the playoffs: