MIDDLEVILLE – This wasn’t the way it was suppose to end.

They had already paid their dues, losing one year ago in the state semifinal game to a red-hot Ithaca squad. 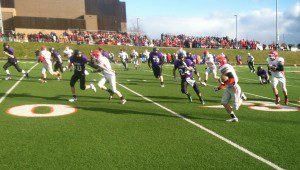 It was their turn to walk into a state semifinal game with the confidence of having been there before.

And yet the Shelby Tigers were the ones who looked stunned Saturday afternoon.

From the opening drive to the final moments in their contest with undefeated Clinton, the Tigers suffered through every conceivable challenge while failing to match the ‘Skins’ both physically and execution-wise.

Add to that a start about as tough as could be imagined, and it equals a divisive 49-3 state semifinal win for Clinton, while the Tigers fall just one game short of a state title game berth for the second straight year.

“We just didn’t execute well today,” said Shelby head coach Lorenzo Rodriguez. “Defensively, offensively, they hurt us. (Clinton) didn’t do anything different than (what) we saw on film. We just didn’t get it done today.” 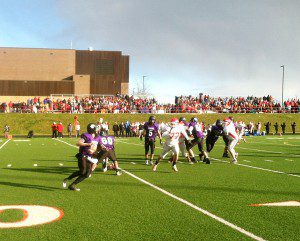 Shelby Andy Fortier scrambled for his life at times versus the ‘Skins. Photo/Mark Lewis

As though to portend the very long day ahead, the Tigers’ Andy Fortier tossed a pick-six into the frigid, sometimes snow-filled air on his very first throw of the game. With Shelby receiver Dylan Unger notched between two defenders, Fortier’s throw bounced off of Mathew Sexton into the arms of teammate TJ Baker, who returned it 24 yards for the score.

Astonished, the Tigers regrouped enough to block the extra point, putting Clinton up 6-0 with less than two minutes having expired in the game.

And more trouble was ahead for the Tigers.

A block-in-the-back call on the ensuing kickoff nullified an 85-yard return by David Guerra, so instead of a tied contest, the Tigers found themselves pinned back on their own seven. Three plays later, facing fourth-and-one on its own 16, Rodriguez rolled the dice and went for it. His Tigers, however, were unable to convert, giving the ‘Skins the ball in Shelby’s red zone. Soon enough, hulking Clinton senior back Brett Tschirhart banged it in from four yards out to put his team up 13-0. 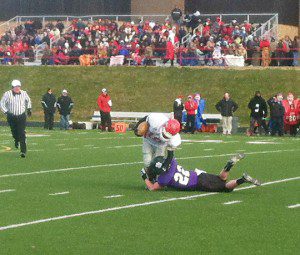 Shelby looked like it had stemmed the bleeding, putting together a 12-play drive that worked its way down to the ‘Skins’ 25.

Alas, the Tigers were unable to convert on fourth-and-10.

Clinton turned right around and scored again – needing just five plays to cover 75 yards – this time on a perfectly played fake punt, as Sexton took the snap around right end and 46 yards for the score, putting the lead at 21-0, following a successful two-point conversion pass from Baker to Dylan Spurlock.

“They got us on the fake punt,” lamented Rodriguez. “We had the guy in the right position and we missed (the tackle). We didn’t tackle particularly well today.”

Shelby finally got on the board on its fourth drive of the half, a 12 play, 52-yard procession that culminated with a 30-yard field goal off the foot of Fortier.

It was the only time the Tigers would score, while the ‘Skins could do no wrong. 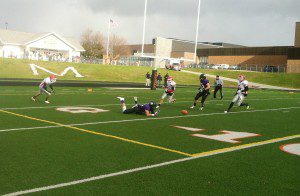 Devin Mussell is unable to come up with the catch. Photo/Mark Lewis

The onslaught reminded Rodriguez of his team’s only loss of the regular season, a 27-0 defeat at the hands of the Spring Lake Lakers. The conditions weren’t favorable in that contest either, rain and mud replacing Saturday’s snow and wind.

“(In both losses) I don’t think we played the physical brand of football that we are used to seeing,” said Rodriguez. “We had a bad day today, and (this) is the result.”

Clinton made it four-straight scores with a six-play drive that found Baker cut up through the guard/tackle gap and down the left sideline for 54 yards and the score. The PAT was once again blocked to make it 27-3.

A short squib kick on the ensuing kickoff was fumbled away by the Tigers, giving the ‘Skins the ball on the Tigers’ 38. And though Shelby was finally able to force a Clinton turnover on downs, on Shelby’s first play of the subsequent drive, Fortier threw another pick-six, this time to Sexton, who made it 35-3 with the 28-yard interception return.

After a Tiger fumble on their next drive, thankfully for Shelby the half ended. 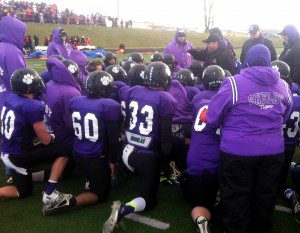 Sexton erased any hope of a Tiger comeback on the ‘Skins’ second play of the second half, as he broke free through the teeth of the Tiger defense and raced 66 yards for the score to make it 42-3.

“We had a great year, you know,” said Rodriguez. “Today wasn’t our day, bottom line. I don’t sugarcoat things and I don’t beat around the bush. They put it to us. I felt they were more physical; they were mentally tougher than we were tonight, and they got us.”

Courtright led the Tiger ground game with 47 yards on 13 carries. Mussell, Guerra and Fortier combined to add just 25 rushing yards between the three.

Courtright led all Shelby receivers as well with three catches for 40 yards.

Sexton led all runners with 108 yards on just three carries and two scores, while Collin Poore added 92 yards on 13 carries and Baker had 68 yards on seven rushes and a score.

Baker needed to throw just one pass, a six yard completing to Poore.

Sexton led the ‘Skins with six stops and a pick, with Tschirhart finishing with five tackles and a sack for Clinton.

Clinton will face Ithaca next Friday for the Div. 6 title. Ithaca, riding a state-record 55-game win streak, has taken the last three such titles.