MUSKEGON – When the offense isn’t quite hitting on all cylinders, it sure is nice to have a stifling defense to make up the difference. 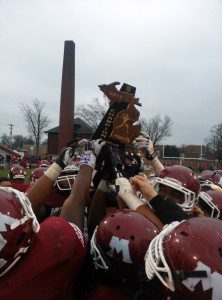 That’s exactly why the Muskegon Big Reds are heading to next week’s Division 2 state semifinals. Muskegon will take on Portage Central, a 42-21 victor over Farmington Hills Harrison.

“We felt pretty good about our defense going in, with their backs,” Muskegon coach Shane Fairfield said. “We always talk about the defense this year, and once again, it proved to be the difference in the game.”

The Big Reds had the task of stopping Will Williams, a senior runner who had rushed for more than 1,800 yards this season. Williams was swarmed under for much of the game, including the first half in which he rushed 12 times for 14 yards. He finished the game, and his season, with 17 rushes for 30 yards.

And the Chemics did not get a first down until 4 minutes remained in the second quarter. In all, Muskegon limited Midland to 10 yards of passing in the first half and minus-10 yards of rushing for a net of zero yards.

That’s how good the Big Reds defense was in the first half. And that was fortunate because Muskegon’s offense sputtered.

“Our offense, at times, is going to have issues,” Fairfield said. “They gave a lot of movement and all that kind of stuff and our offense came out last week and scored 28 points against a very, very good defense and then, these are 17 year old kids trying to deal with all the emotions of the ups and the downs.

“You’re not always going to win the pretty ones and we got three points out of the second half,” Fairfield said. “Our defense scored seven and the offense got two TDs.”

The Big Reds’ defense made an early statement with five straight 3-and-out possessions for the visitors. Midland’s first 15 plays resulted in minus 10 yards.

In the meantime, the Big Reds were able to get on the board.

A four-play drive ended when quarterback Deshaun Thrower found plenty of open field to run down the left side. When he got inside the 5, he met up with some Chemic defenders, but was able to battle his way into the end zone for a 36-yard touchdown run.

Late in the first quarter, Muskegon went to its bag of tricks and it paid off in a big way. Facing a fourth down at the 45, the Big Reds pulled off a fake punt and senior John Hall dashed 31 yards down to the Midland 14. Three plays later, Javauntae Thomas plowed into the end zone from 2 yards out.

Chemic linebacker Michael Alexander picked off a Thrower pass with 5:26 remaining in the first half and that put Midland at the Muskegon 43. A pass to Jukarri Cooper, good for 5 yards, gave the Chemics their first first down of the game with 4 minutes left in the half.

Then came one of the biggest plays of the game.

Midland quarterback Tanner Gross was running for his life and was hit by Taran Smith. The pass sailed toward Muskegon linebacker William Hunt, who corralled the ball after it bounced off his knee. Hunt dashed down the left side 67 yards for a touchdown. With Adrian Briseno’s extra point, Muskegon had a 21-0 lead in the final minute of the opening half.

“We could have had them at 7-0 going into the half and when you look back on it …  the fake punt and the interception were huge, even though we couldn’t move the football,” Midland coach Eric Methner said. “Our defense was playing good and we hadn’t put them in too much jeopardy. But those two were big plays.”

The second half was a struggle offensively for the Big Reds as they mustered just a 42-yard field goal by Briseno with 4:50 left in the game.

Midland did put together some offense in the second half. But its only touchdown came after a minus 2 yard punt by Muskegon.

Muskegon began a drive at its own 1 and got to just the 14. On fourth down, the punt sailed nearly straight up in the air and when it came down, Midland had the ball on the Muskegon 12. Gross hit Jordan  Wilson with a short pass and the sophomore receiver battled his way into the end zone.

Thrower finished with 17 rushes for 130 yards despite ankle and hand injuries. Thomas rushed 18 times for 55 yards. Thrower completed 5-of-12 passes for 36 yards.

Smith and John Hall had seven tackles each. Hall also had an interception and Alezay Coleman recovered a fumble.