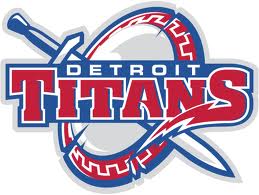 Evan Bruinsma is on a tear for the University of Detroit. He did it again on Wednesday night in a 91-75 loss to Toledo.

Bruinsma led the Titans with 25 points and 14 rebounds in their loss to the Rockets. He also had three blocks, three assists and one steal for the Titans, who fell to 4-5 on the season. He made 10-of-15 shots from the field, including 2-of-4 on 3-pointers.

“I made my first couple shots and got into a rhythm and made a couple layups, but we need to play better defense,” Bruinsma said. “We gave up way too many layups, allowed too many guys driving into the paint and did not play with enough toughness.

“They (Toledo) have a lot of quality players and these kind of opponents will toughen us up for later games,” Bruinsma noted.

Bruinsma also went 3-for-5 from the free throw stripe, with two assists and two blocks as he played 39 of the 40 minute game.

Bruinsma averages 11.8 points and 8.4 rebounds per game. Bruinsma also averages 2.1 assists, 1.2 steals and nearly a block in his first nine games of the season.

The 6-foot-8 Bruinsma was nominated on Monday to the 2014 Allstate National Association of Basketball Coaches Good Works Team.

The NABC Good Works Team nomination recognizes Bruinsma’s leadership and dedication to all facets of the classroom. Both on and off the court, the senior co-captain is recognized for being a leader.  A total of 75 Division 1 male-student athletes were nominated, including four from the Horizon League.