MUSKEGON – Looking back, it’s hard to believe Matt Iacopelli didn’t score a goal in the first 11 games of the season. 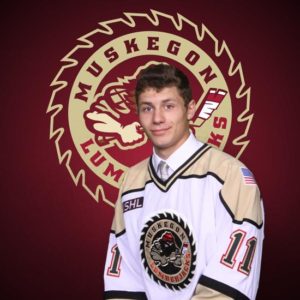 Iacopelli scored two goals Sunday, helping the Muskegon Lumberjacks come from behind to down the Team USA under-17 squad 5-2 in front of 1,425 fans at L.C. Walker Arena.

His first goal was his 26th of the season, which set a new single-season goal scoring record for the Lumberjacks. The old record was held by Matt Berry, who scored 25 in the team’s first season in 2010-11.

Muskegon improved its record to 18-17-4 for 40 points in the USHL’s Eastern Conference. The victory helped ease the sting of Saturday’s 7-0 defeat at the hands of the Team USA under-18 squad, Muskegon’s worst loss of the season.

“I hadn’t really thought about it much,” Iacopelli said after the game, when asked about his scoring record. “Just keep on scoring, I guess, and it just worked out my way. It really doesn’t matter. It’s all about the team, as long as the team gets the win. We needed these points tonight. It’s more than halfway through the season and we’ve got to make the playoffs.”

Muskegon coach Todd Krygier said Iacopelli’s talent has been obvious since training camp, but he wouldn’t have predicted this many goals for him at this point in the season.

“We saw the potential,” Krygier said. “He scored 50 goals in midget majors the previous season. We saw a guy with an NHL shot, NHL  body and NHL release, so he’s a kid any team would have taken.

“He came in and didn’t have any goals through the first 11 games. He’s been through a process and just continued to develop. He still has to work on a few things to be effective at the next level, but he works hard and he’s coachable. He listens to what we say about playing defensively. That’s going to make him a more valuable player and a better player.”

Iacopelli helped the Lumberjacks rally from a sloppy start and early deficit Sunday.

Team USA’s Casey Fitzgerald drew first blood just over two minutes into the game, giving the visitors a 1-0 edge. Iacopelli tied the score with a breakaway goal with two minutes left in the first period.

Iacopelli scored again with 4:17 left in the second period, giving Muskegon a temporary 2-1 lead. But Team USA answered with a goal from Michael Floodstrand late in the second, knotting the game at 2-2.

The Jacks were more than a little frustrated at that point, having outshot Team USA 18-3 in the middle session with little to show for it.

But instead of letting the frustration get the best of them, the Lumberjacks kept attacking and nailed down the victory with third period goals from Christian Wolanin, Matej Paulovic and Conner Wood.

Wolanin, Paulovic and Wood are three of the six new players that have helped the Lumberjacks turn their season around with a 7-4 record in their last 11 games, including a 5-3 mark on their recent road trip.

Wolanin’s goal came on a power play five and a half minutes into the third period, breaking the tie.

Paulovic’s goal, with about seven minutes left, came on a rebound from a shot by Chase Hatcher.

Wood finished the scoring with a steal and breakaway goal with just over two minutes remaining. He  missed his first shot, but collected the rebound behind the net and backhanded in past Team USA goalie Luke Opilka.

“I was pulling my hair out after the first period, because we started out the way we finished the game yesterday, which was pretty disappointing,” Krygier said. “But (goalie Jordan Uhelski) did a real nice job in goal at key times, and we were more disciplined and focused in the third period and found a way to get it done.”

Montague’s Buchberger could be chosen in MLB draft, following a great college season