MUSKEGON – With news that Chicago Curie blue-chipper Cliff Alexander – the 6-8 Condor center who is the 4th-ranked senior basketball player in the country – wouldn’t be taking the floor in Muskegon’s nightcap contest with the Condors Saturday night, the host Big Reds decided to still give the fans something to cheer about.

They just needed overtime to do it. 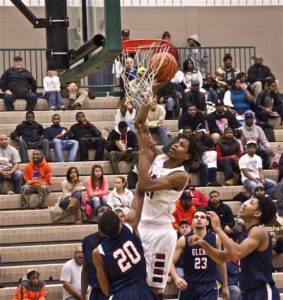 Muskegon (4-0), the top-rated high school boys team in Michigan, downed Curie, the top-rated team in Illinois  (and ranked 20th in the country) 73-66, coming alive in the fourth to tie it, and then exploding for a 10-0 run to start the extra frame to snatch the impressive win from what looked like a sure defeat.

Last year, Muskegon fell to the Condors by 15 points.

“When we went back into the locker room (before the game, once they had learned Alexander wasn’t going to play),” said Muskegon head coach Keith Guy, “I saw some deflated faces. It shouldn’t be like that. It doesn’t matter, it doesn’t matter.”

He continued, “I’m telling you, with or without (Alexander), that’s a good basketball team. They are ranked 20th in the country and not just because Cliff Alexander. They have some college players on that team. We beat a good team tonight.”

It was pretty cold outside of the Raymond Potter gymnasium, with snow piling up in the Muskegon streets at an alarming rate, and in the first quarter, things were pretty cold inside the old gym as well. Curie (10-1), without Alexander, who was forced to sit out of the contest due to an ejection and one-game suspension carrying over from an altercation last month, struggled to get going right out of the gate, missing nine of its first 10 shots.

Muskegon, too, looked out-of-sync at the start, going just three-for-15 from the floor to start the game, en route to an 8-7 deficit after one.

But it wasn’t long before both squads started heating up, with Curie hitting eight-straight shots in the second quarter, led by senior guard Joseph Stamps, who scored eight points during that stretch.

Muskegon was buoyed in the second by junior center, and recent Michigan State University commit, Deyonta Davis , who poured in eight of his own before finishing with a team-high 24 points.

“”It was exciting,” said Davis after the game. “We talked about (beating them) all throughout practice.”

Down four with less than 40 seconds left in the half, David received a perfectly placed alley-oop pass from another Div. 1 commit (Stony Brook University, New York), senior guard Deshaun Thrower, to cut the Condor lead to two. Moments later, senior Big Red guard William Roberson banked in a lay up to make it 25-25 at the break.

Though the Big Reds held on to a narrow 47-46 lead after three quarters, Muskegon starters Jordan Waire and Davis both picked up their third fouls, forcing Guy to sit him lest he pick up anymore before crunch time.

Junior Joeviair Kennedy helped the burden, scoring six in the third and 12 in the final two quarters and the overtime.

“I just tried to work hard on defense,” said Kennedy. “I didn’t have a good first half, so I had to come out and show coach what I could do defensively and offensively.”

But it all came down to the fourth quarter.  Curie looked like it might escape with the win, going up 57-51 with a little over two minutes left in regulation, ignited by a 9-0 run.

“I thought we played in spurts,” said Guy. “We didn’t have the passion and the energy, we didn’t play with it through stretches in the game.”

And yet, back came the Big Reds, answering with a 6-0 run, capped by a Kennedy lay in with 49 seconds left, to tie it at 57-all. Curie’s Joshua Stamps’ lay up nine seconds later gave the Condors the lead, but Thrower tied it again with a layup of his own at the 28-second mark. From there, the Big Red defense went into lock down mode, and Stamps’ three-point try sailed right of the basket.

“We practice like that all the time,” said Thrower, “being down with a minute left or whatever. Coach puts us in that situation all the time, so we know we can handle it.”

In the overtime it was all Muskegon, led by a huge Roberson three-pointer to start the frame, and then followed by a free-throw make by Kennedy, a layup by junior guard Jason Loera, a clean-up dunk by Davis and a lay in by Thrower to seal the deal.

“I thought then, the guys finally realized, ‘Hey, we better play,’” said Guy. “We just played with our backs against the wall, we were pretty much dead to rights. In overtime, I think they said, ‘We have to play the way we are capable of.”

To go with Davis’ outstanding 24-point, 14-rebound, five-block performance, Thrower finished with 17 points, seven assists and three steals, while Kennedy finished with 14 points and Roberson with 11 points and two steals.

Joshua Stamps led all scorers with 25 points, while brother Joseph Stamps had 15 points, and Marcus Gatlin added 11 points in the loss.

“I thought we did some good things,” said Guy. “But there’s room for growth. I don’t think our guards handled it well down the stretch with pressure. But we did it when we needed to.”

The two other games in the Classic’s lineup featured a whole host of Div. 1 recruits and high-flying acrobatics themselves.

In the middle game, Tyler Ulis, a 5-10 point guard who has committed to John Calipari at Kentucky, used his incredible speed to break down the defense repeatedly, finishing with 30 points and 10 assists, leading Marian Catholic of Chicago Heights, Ill., to a 74-60 victory over Detroit Country Day. Country Day was led by 22 points from Xavier recruit Edmond Sumner, a 6-4 guard.

In the opener, Detroit Consortium Prep rolled to a 70-35 victory over defending Michigan Class A semifinalist Grand Rapids Christian. Josh Jackson, a 6-7 wingman who is rated the No. 2 sophomore player in the country, scored a game-high 18 points to lead the Cougars. 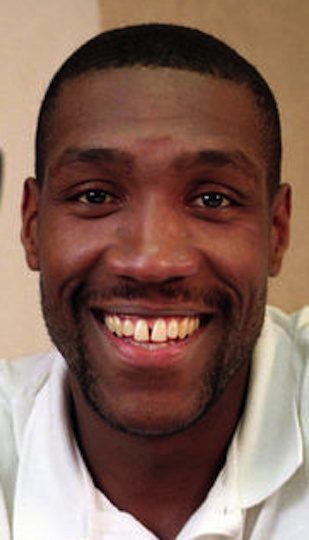 Mark Hughes in running as assistant coach for Detroit Pistons