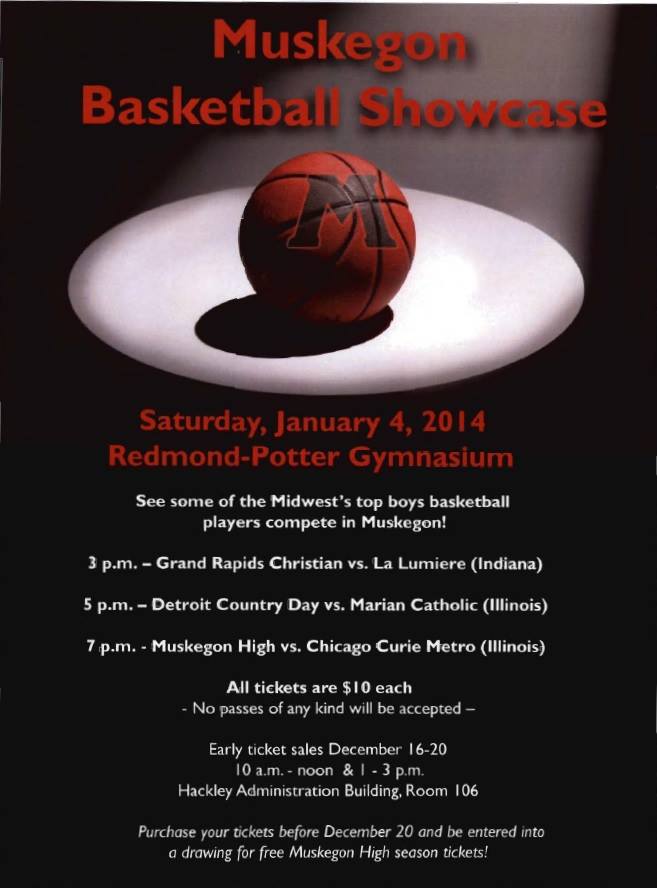 Why wait until March, or drive across the state, to watch some of the best high school basketball players in the entire Midwest?

Muskegon’s Joeviar Kennedy, right, looks to get off a shot against the defensive pressure of Chicago Curie’s Cliff Alexander during the 2013 basketball showcase. Photo/Tim Reilly.

The Muskegon Basketball Showcase has once again put together a daylong blockbuster event featuring six outstanding teams from Michigan and Illinois – along with a host of highly-touted recruits who are expected to bring big-name college coaches and scouts to historic Redmond-Potter Gymnasium on the first Saturday in January.

“This tournament is known for bringing elite players to Muskegon, and that will definitely be the case again this year,” said Muskegon High School head varsity coach Keith Guy.

Muskegon High School promises to be a worthy host this year, with a loaded roster that includes two of the top-rated players in Michigan – 6-9 junior Deyonta Davis and 6-1 senior point guard Deshaun Thrower, an all-state quarterback who has committed to Division I Stony Brook University in New York to play basketball.

The Big Reds will have their hands full in the last of the day’s three games against perennial powerhouse Chicago Curie.  The marquee matchup in that game is Muskegon’s Davis battling inside against 6-9 senior Cliff Alexander of Curie, who has committed to Kansas and is ranked the No. 4 senior high school basketball player in the country.

In the day’s first game at 3 p.m., Grand Rapids Christian, a Class A semifinalist last season, will take on the preseason No. 2-ranked team in Michigan, Detroit Consortium, and 6-7 superstar Josh Jackson, the No. 2 sophomore player in the country. Jackson has already been offered by Florida State, Kansas, Memphis, Ohio State and Oregon.

The 5 p.m. matchup is a showdown between two of the nation’s best senior guards – Xavier recruit Edmond Sumner of Detroit Country Day against Kentucky-bound Tyler Ulis of Marian Catholic (Ill).

All tickets for the day-long event are $10 and no passes of any kind will be accepted.

Check out the highlights from last year’s showcase.