MUSKEGON – The spotlight belonged to Jasmyn Walker on Tuesday. 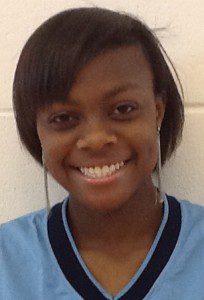 The standout senior guard became only the third player in Mona Shores girls basketball history to reach the 1,000 point mark.

But you get the feeling that her younger sister might be joining that exclusive club a few years down the road.

Freshman Jordan Walker, basking in the glow of her older sibling’s big night, quietly scored a game-high 14 points to lead Mona Shores to a surprisingly easy 50-23 victory over Zeeland East.

The victory improved the Sailors’ record to 12-3 overall and 5-1 in O-K Black Conference action. They will host Reeths-Puffer Friday in a showdown of conference leaders.

Mona Shores will go into that contest, and the rest of the season, knowing they will be led by one the area’s best players, and maybe one of the best local players in history.

Jasmyn Walker, a four-year varsity starter, scored her 1,001st career point midway through the first quarter Tuesday, prompting a stop in the action so the crowd could acknowledge the moment.

She added a second bucket about a minute later to move up to second on the all time Mona Shores girls scoring list. She only trails former All-Stater Jamie Ahlgren, who scored 1,334 career points.

“It means a whole lot,” said Jasmyn Walker, who will attend Valparaiso University on a basketball scholarship next year. “I’m just grateful that my teammates and my family have been so supportive over the past four years. I still want to see our team win the conference, and do well in districts and regionals and things like that, and I would really like to be first-team All-State.”

Mona Shores coach Brad Kurth said Jasmyn has been a leader and a cornerstone of the program since she set foot on the court as a freshman.

“The thing about Jasmyn is that she plays both ends of the court,” Kurth said. “She rebounds, she defends. A player that plays both ends in high school that well says a lot about her character and sense of team play.

“A lot of players plateau, but each year, if you look at her stats, she has extended and gotten better due to her work ethic and determination to improve.”

But Kurth knows his cupboard won’t be bare when Jasmyn Walker graduates in the spring. Her sister Jordan already looks like a senior on the court, and together they provide an explosive duo that makes the Sailors competitive against any team they play.

Jordan Walker also had five steals on the night.

“Jordan Walker is one of the top recruits in the state of Michigan as a freshman,” Kurth said. “She is a gifted player. She understands the game like a junior or senior. She has a motor where she plays hard all the time. I’ve never seen her take a day off, never seen her play half way. She’s an effort player all the way.”

Mona Shores thought it might get a challenge from Zeeland East, which handed league co-leader Reeths-Puffer its only conference loss of the season.

But the Sailors jumped out to a 15-8 lead after one quarter, a 25-14 lead at halftime and cruised to the victory from there.

The visiting Chix also struggled with Mona Shores’ full court press, turning the ball over 12 times in the pivotal first half and 21 times in the game. Zeeland East lost control of the contest in the third quarter when it only managed to score four points.

Casie Curtiss had 10 points for Zeeland East, which dropped to 3-9 overall and 1-3 in the league.