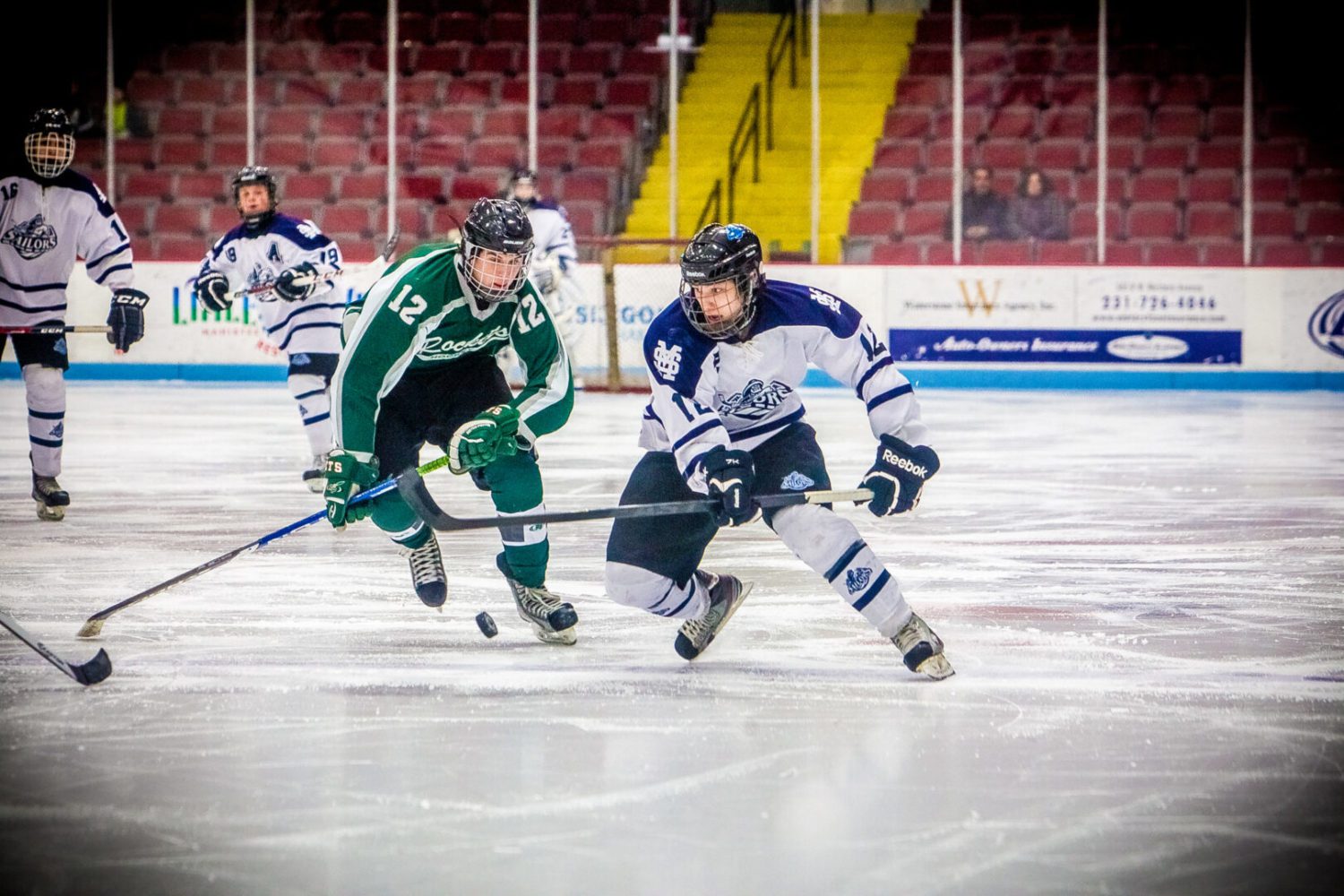 “It always feels good to beat Shores,” Smith, a senior forward said. “You have to step it up, it’s a rivalry game.”

Smith has certainly done his part, scoring both goals for the Rockets on Wednesday and netting two more in Puffer’s 5-0 win over the Sailors two weeks ago.

Reeths-Puffer took a 1-0 lead on Smith’s first goal 5:13 into the first period. Riley Draper let go with a slapshot from the point that slid along the ice before Smith broke in front of the net and redirected the puck up and over Sailors’ goalie Tim McClain.

Mona Shores would see a couple of opportunities to tie the game go by the wayside in the opening period, as CJ Meyers would hit the crossbar on a slapshot from the point and Ben Essenberg would be denied alone in front of the net after intercepting a wayward Rockets pass in their own end.

The Rockets would maintain their one goal lead through the first period until 33-seconds into the second.

On the power play, the Sailors’ Essenberg split the defense at center ice and outskated the Rocket defenders to the net, beating Vander Lee on the short side with his forehand, to tie the game at 1-all.

Despite having seven power-plays, Essenberg’s goal was the only one the Sailors were able to capitalize on.

“We took ourselves out of the game tonight with the frustrating penalties,” Rockets coach Eric Sikkenga said. “When you take that many penalties it’s hard to get going offensively. When you have some of your top players sitting in the box, it’s tough. Our third line did a great job tonight.”

Mona Shores didn’t get to enjoy the 1-1 tie for very long, as Smith took a pass from behind the net from Ryan Compeau and slid the backhand into an opening for a 2-1 lead just 1:16 after the Sailor goal.

“Hockey is about mistakes and who makes them and who capitalizes on them,” Shores coach Pat Rabbitt said. “I think Josh Smith took advantage of those mistakes. When he gets the puck he can find the net.”

Holding a 2-1 lead, the Rockets almost increased it as Kyle Kendra beat McClain on a breakaway, but the puck bounced up and over the Sailors goalie and came to a halt on the goal line. McClain quickly gloved it before it could leak into the goal, protecting the one goal deficit.

Mona Shores would have three power play opportunities in the third period, the final one coming with three minutes left in the game, but were held to just three shots on net in that time.

“When you give up seven power plays it’s tough,” Sikkenga said, “but our guys work hard on the power play kill in practice, they enjoy that.”

Reeths-Puffer finished the game with a 18-14 shot advantage and finish up the regular season on Saturday, still with a chance to capture the OK Tier I conference title.

Both teams begin post season play with games at the L.C. Walker Arena on Tuesday, February 25. Mona Shores will faceoff against Petoskey at 5:30 while Reeths-Puffer will play Traverse City Central at 7:30. If both teams win, they will face each other for a third time on Thursday.

McDonald and Hanshue lead Fremont past Newaygo, will face Sparta on Friday evening for district title