Someone forgot to tell Oakridge and Orchard View that tip off was 7:00 p.m. for the District-52 Class B District Championship game. 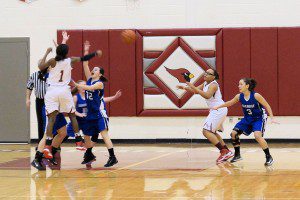 Both teams came into Friday night shooting cold from the field all throughout the first half. As both teams combined for just three first half field goals.Jayshonna Blackshire and the Orchard View girls basketball team however woke up in the second half to defeat Oakridge mightily 47-22 in front of their home fans on their home court to earn a Class B District Title.

“The girls stuck to the game plan and executed wonderfully.” said OV Coach Rodney Walker. “I am so proud of them. They have worked so hard.”

The Cardinals were led by Junior Jayshonna Blackshire who scored 17 points to lead the team.

Blackshire accounted for eight of the Cardinals 17 points in the third quarter, which turned an ugly 11-7 halftime lead to a strong 13-point lead after three quarters.

“She has given us offense all year long and gets everyone around her involved.” said Walker about Blackshire.

The Cardinals victory did not come without a little scare. With 1:58 left to play Blackshire injured her ankle and had to leave the game. 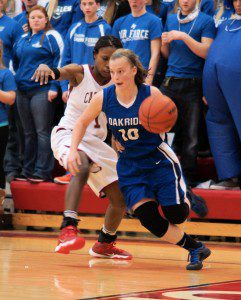 #10 Morgan Giddings drives to the basket for Oakridge. Photo/Sherry Wahr

“She should be fine, she is tough.” said Walker.

After the game Blackshire stated she would be ready for Tuesday’s Regional game and that she would not have succeeded without here teammates, especially on defense.

Both teams started the game cold as each team had only one first quarter field goal and were tied at five points apiece going into the second quarter.

The Eagles’ struggles continued in the second quarter as they only made 1-of-25 shots from the field. The Cardinals failed to take advantage and went into the locker room at halftime leading 11-7.

The pace of the game changed dramatically in the second half as the Cardinals scored 17 third- quarter points and took control of the game.

The offense for the Eagles continued to struggle as they ended with eight second-half points led by Morgan Giddings who ended her high school basketball career with 15 points.

The Cardinals took advantage of the remaining drought to outscore the Eagles 36-15 in the second half. 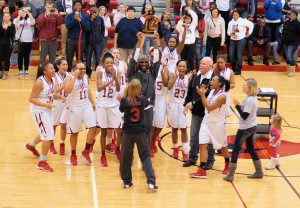 “We have a great shot, our team goal is ready to play at the Breslin Center and win a state championship.” said Walker. “I have some girls who were waking up at 5 a.m. to get in some extra work on basketball and it is paying off.”