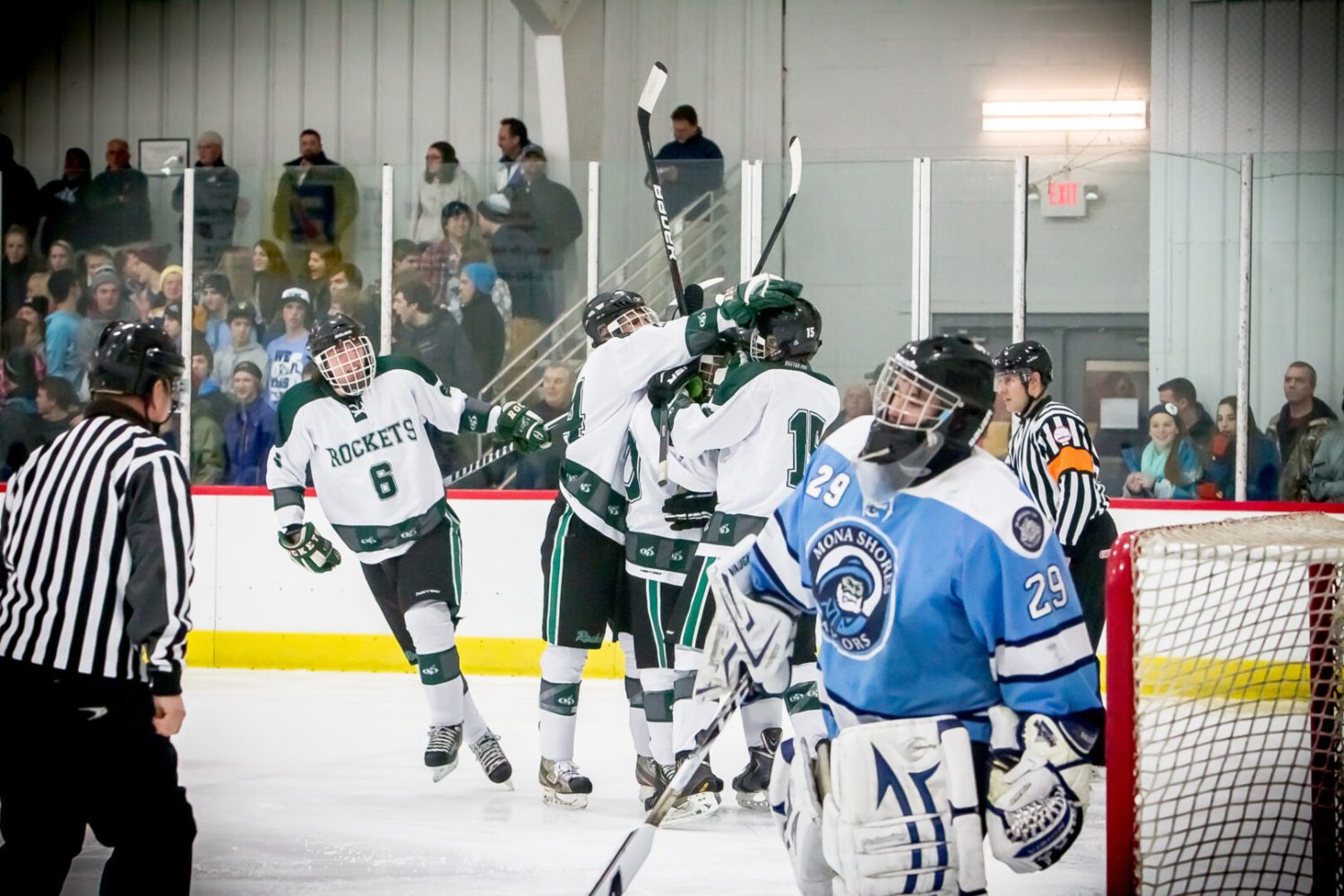 But the showdown of OK Tier I rivals, Mona Shores and host Reeths-Puffer, brought out enough fans that Lakeshore’s parking lot spilled over onto Airline Drive and into parking lots of neighboring businesses. Inside, Sailors and Rockets fans split the arena in half and filled it to standing room only, and if you were one of the many dressed in green and white, you would leave very happy.

Reeths-Puffer scored two power-play goals in the first period and pulled away from Mona Shores, 5-0, putting them on top of the conference standings. 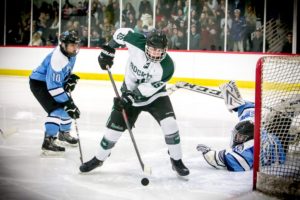 “OK (conference) games, no matter who you play, you have to go and (win) them,” Rockets coach Eric Sikkenga said. “We knew with a win we’d be tied for first with Rockford.”

It didn’t take the Rockets (11-5-1, 6-2-1) long to strike, taking advantage of the extra attacker just 1:58 into the first as Riley Draper scored off a pass from Josh Smith and Brandon Young. Seven minutes later Puffer missed a chance to go up two goals as a shot beat Sailors goalie Tim McClain but hit the post.

Kyle Kendra scored on the power-play with 5:22 left in the first, to give the Rockets that two goal lead, which would be more than enough for junior goalie, Jacob Vander Lee.

Vander Lee finished the game with 19 saves, picking up his first career shutout, and recording the first shutout ever for a Rockets goalie against Mona Shores.

“It’s a pretty good feeling,” Vander Lee, who played hockey with the Bell Tire AAA team in Detroit last year, said. “When I saw that first power play goal go in, it was a relief. (And) it helps when shots aren’t in front of you and (the defense) pushes everything to the side.”

The Sailors (3-7, 1-6) kept within striking distance and had two power-play opportunities in the second period, but were kept out of the net.

Smith gave his Rockets a 3-0 lead with 6:48 left in the second period, knocking the puck from a crowd in front of the net. 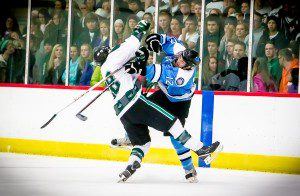 “We’ve been doing a good job on special teams, but those two goals got us on our heals,” Sailors coach Pat Rabbitt said. “Quite frankly, they outworked us, they outplayed us. I was expecting more of an effort out of our guys, the effort just wasn’t there. The guys tried, but it just wasn’t there.”

The Rockets next two goals, both in the third period, came even strength. The first from Derrek Pleimling and another from Smith. Puffer finished the game 2-of-6 on the power play, but it was the first two that set the game’s tempo.

“We spend a lot of time on our special teams,” Sikkenga said. “We have a lot of skilled guys and when we can move the puck and have extra space we’re going to be very good. And in a game like this – that was our pre-game message – stay out of the box, don’t take any penalties.”

Mona Shores finished 0-4 on the power play, and have now dropped the last two meetings with the Rockets, including last years playoff game. The two teams will face off again in two weeks on Wednesday the 19th at the L.C. Walker Arena.

“The games (against Shores) last year were just spectacular,” Sikkenga added. “We know them, they know us. We expected them to bring a physical game and they did, but luckily Jacob played really well and gave us the opportunity to put the game away.”