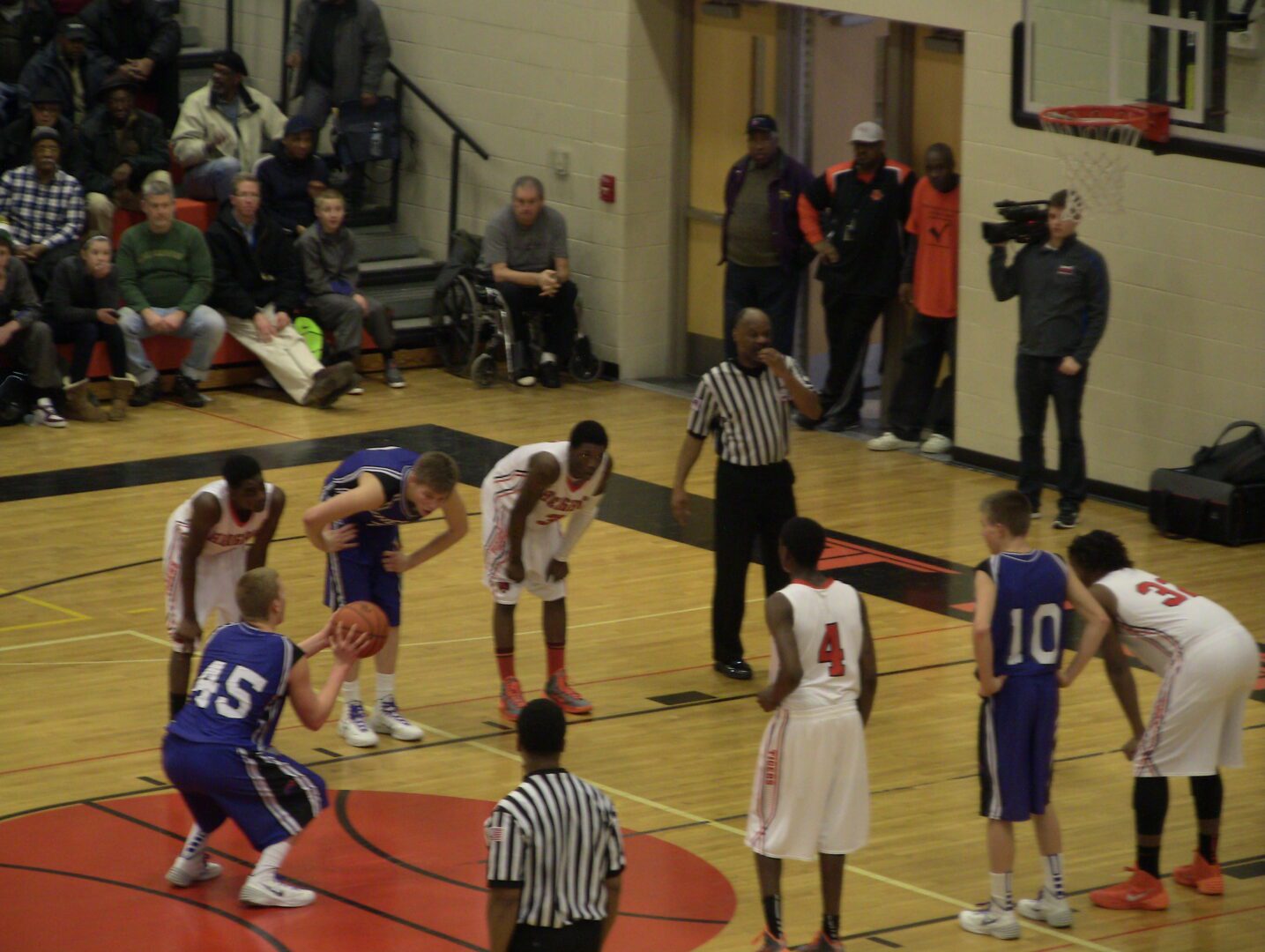 MUSKEGON HEIGHTS – The calendar may still sit in the tail end of February, but the basketball calendar is firmly set in March.

Even though it wasn’t a league game, and would have little impact on the season as a whole, Tuesday night’s absolute battle between host Muskegon Heights and Shelby showcased two of the best Class C boys basketball teams in the state.

The crowd, as they say, was hype, and the atmosphere spoke of the Heights team’s dominance over adversity, and of Shelby’s enduring ability to play well at every time they step on the court.

And not for a defensive lapse in the waning seconds of overtime No. 4, the two teams would still be playing.

The 81-80 Shelby win ended in surprising fashion, when senior Andrew Beckman took a pass around 19 feet from the basket, turned toward the rim and found an open path directly to the winning put-in with 25 seconds left in the game.

“I had an opening so I just took it,” said Beckman, describe his near waltz to the rim in typical subdued Shelby fashion. “We practice coming to the ball and meeting the pass. We knew they’d be aggressive with it. I figured (the defender) would be aggressive and at least be on my back.”

The help defense was a tad too late and Beckman finished off what heretofore had been the greatest head-to-head boys basketball battle in recent memory.

“You’re not going to find it anymore intense,” said Zoulek of the ruckus and joyous gym atmosphere . “You really aren’t. I mean, I don’t care what it is. This is exactly what we wanted, and this was exactly what they wanted. You want that preparation for the tournament; you kind of wish you could go right into it, sometimes.”

Heights head coach Dalrecus Stewart was overwhelmed with the pace, effort and sheer length of a four overtime game – that’s a game and a half, if you’re unclear.

“Nobody can tell me it’s not March right now,” said Stewart with a laugh. “As far as that goes…”

Later Stewart joked, “I honestly lost track of how many overtimes after about three. I just kept asking the scorer’s table asking if I had a timeout. I just know it kept starting over.”

The contest started at a fever pitch and never relented. The relentless pace by which the Heights plays seemed to rattle the visiting Tigers, with Shelby surrendering a very unShelby-like seven first-quarter turnovers, primarily from the full court trap and from steal-and-dunk fireworks the ended with dunks from Heights seniors Aaron Sydnor and Eddie Tornes.

After trading baskets in the second quarter, and with Shelby leading 31-26 at the break, the third looked like Shelby might be in for a comfortable win. Of course the host Tigers responded, coming back from as many as nine down to trail by just one, 43-42, after three. Tornes and Sydnor combined for 10 of the Heights’ 16 third-quarter points to held their club climb back into contest.

The Heights took the lead three times in the fourth, and each time Shelby managed to respond.

Shelby sophomore Jeff Beckman and junior Caleb Anderson both went one-for-two from the free-throw line with under three minutes remaining to maintain the tie, and several near-misses later, the game went into the first overtime tied 51-all.

All four extra periods had a point where either team looked poised to win, the Heights in the first, second and third frames, and Shelby in the third and fourth overtimes, but it wasn’t until Beckman’s lay up in the last extra stanza produced a game-winner.

Whenever things were at their bleakest, Zoulek looked underneath the basket for inspiration.

“The key was to go inside, or attacking inside,” he explained. “Once you attack inside, then your post is open for those put-backs and and-ones,” said Zoulek. “That’s what we did tonight that we haven’t been doing very well.”

“Their inside presence gave us trouble,” admitted Stewart. “As we continued to battle, the fatigue started getting to both teams. Their size kind of over-powered us. I still think we can play a little more disciplined. Some of the gambles. Some of the shots when we really didn’t need to shot, things like that. We kept opening up the door.”

For Beckman, the game’s finish only underscored the enjoyment of a game like this.

“Heights is a good team, so it was fun to go in there and duke it out with them and just go at it,” “Our bench was huge and our fans we huge in just really sparking us, giving us that energy. It just can’t come from us. It has to come from everybody.”

Tornes finished with a game-high 30 points, with teammate Sydnor pouring 27 more, and junior Antonio Jones added nine in the loss.

Beckman finished with a team-high 24 points, with Anderson totally 19 points and Andrew Beckman added 15 for Shelby.

Zoulek said the late season match up against a team the plays so up-tempo is a bonus due to the teams Shelby will face in the tournament – theoretically, the two teams could meet again after the district tournament. The style was vastly different than the teams in the West Michigan Conference.

“We’ve played some physical teams, some bigger teams, we’re not going to play any faster teams,” said Zoulek. “It’s just what we needed.”

For Stewart, his Tigers benefit as well.

“The optimism that existed (tonight) in the locker room was a positive, because I’ve seen in games past where we’ve had tough halves, or didn’t come out successful,” he said. “There was a lot of inner-fighting. Today we were candid about identifying what we needed to do different.”

“I think to carry over this intensity is also a plus for us,” said Stewart. “I want to play at a high level come Monday. Saugatuck is a really good team too. But if we can carry the intensity from an experience likes this, I think we can be tough”

For Shelby, the squad has some unfinished business Thursday versus Mason County Central.

“The guys on our bench are going to have to step up on Thursday,” said Zoulek. “This was a tough one physically and mentally. But we have the guys on the bench who can do it. That’s what I told them in (the locker room), ‘It’s going to take a team to win it Thursday up in Scottville’. Time will tell.”

Lumberjacks looking to bounce back from three game winless streak