For the last 15 years that was the theme for the Henry Bruinsma family as they prepared for an evening practice or weekend soccer, basketball, or volleyball games for their five talented children.

All five had a love affair with multiple sports. They spent their time playing AAU basketball and volleyball, American Youth Basketball Tour and premier travel soccer. This occurred during, but not exclusively, during the off season of their high school or junior high seasons.

Janet played soccer and basketball in high school. She received a scholarship for soccer at Trinity Christian College in Chicago.

William played basketball and soccer and ran track in high school. He received a basketball scholarship at Trinity Christian College.

Nate played soccer and basketball in high school then went on to Division I Western Illlinois, where he earned a soccer scholarship. He graduated in 2012.

Evan played soccer and basketball four years of high school and golf during his senior year. He is currently playing Division I basketball at the University of Detroit-Mercy. He is a senior starter on the Titans of the Horizon League.

In today’s society, it is difficult to be a multi-sport athlete because of the many requirements that families have with work, church and school work.

But it also means a lot of traveling, enormous amount of  time commitments and expense.  Yet the Bruinsmas did this consistently from the middle 90s to the present. 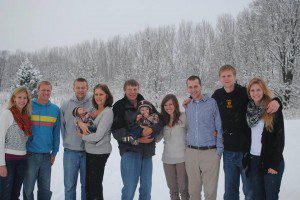 But from it came five college scholarships.

To earn the scholarships a lot of family sacrifices had to occur.  Besides getting the good grades in school, it translated into off season activities which most families would find mind boggling.

“Mom had a schedule for the weeks ahead to make sure the kids could get to where they wanted,”  said Janet.

Many times these were in Holland or Grand Rapids and even games outside of Michigan. There were trips to Florida and North Carolina for tournaments.

Games on weekends would mean  juggling of not only parents’ time schedules, but also perhaps bringing the older Janet home from college to provide another driver.

Having three kids going in different directions might mean that Janet would take one to games while Henry and Margaret would be driving the other two. 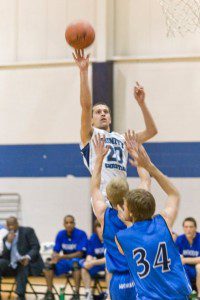 “We would have a basketball game on Friday for one and then onto a soccer or volleyball tournament on the weekend,” said Janet.

Living in New Era also added on some miles due to all activities either going north to such soccer tournaments as in Petoskey or others in the southern regions of Michigan or even in neighboring states.

“We would not have traded our experiences in the New Era region for anything,” Margaret said.  “The kids could use the New Era Christian gym or the school’s soccer field most anytime they wished.”

The school encouraged all students to participate in everything, including music activities.

All of the kids played piano and took lessons with Nate being the only exception.  Henry and Margaret encouraged all of them to be involved in everything if they so desired.  To play anything was always a voluntary thing for each child.

“We never forced the kids to play a sport or music activity,” Henry said.

This would mean each kid played two sports during a spring season like soccer and basketball or playing one sport for a travel team and playing a school sport during the same season or in the summer with AYBT and travel soccer. 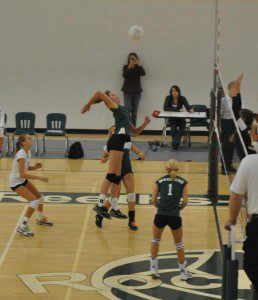 “I never got sick of traveling,” Nate said. “It was always enjoyable because our family made it enjoyable.”

Interesting stories always arise. William shared an interesting experience as he had played premier soccer in his sophomore season.  He had improved over the course of the season, but he had a setback. In fact, he scored the winning goal in the championship game and then tried out for the same team a week later to play during the following year, but was cut.

He decided at that point to forget travel soccer and concentrate on improving his skills for basketball.  He played only AAU and AYBT basketball from that point on and it paid off for his high school basketball career where he excelled as a point guard.  All the hard work he endured culminated in him starting at Trinity Christian College years later.

Not all the experiences were enjoyable, however. Evan said Janet dropped him off at a tournament and took off so quickly she accidentally ran over his foot.

The off-season travels of the Bruinsma family were not the only ways for the kids to go to the next level in their sports. They gave a lot of credit to the school’s programs that they were involved in.

But the basics started early in their driveway or in the backyard as they would play games during halftime of their favorite team, Michigan State. 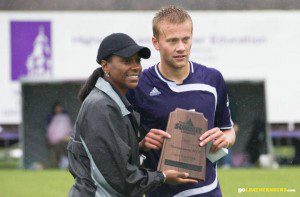 “There would be 1-on-1 or we would have 2-on 1 tournaments in the summer or in the  winter when we would clean off the snow from the driveway,” Evan said.

And like every family that has that intense competitive spirit, occasionally a fight would break out.

“The basketball games in the driveway would always be competitive and we would always want to beat each other and it made us stronger” says Evan, the youngest of the boys.

The bottom line, however, was the kids would always stick together in spite of these battles. The family still enjoys playing football or soccer in the backyard, getting the parents involved as well.

Henry would organize drills for the kids when they were younger and he was the motivator for the kids before and after the games.  He was always hard on both the boys and the girls but his philosophy was simple:  “if we (Mother and I) allow you to play all the off-season sports, you need to play hard. The kids never had a lack of effort.”

Margaret, on the other hand, was the encourager and they knew she was in the crowd stating the positives.  Henry’s voice of critiquing could also be heard in the stands. 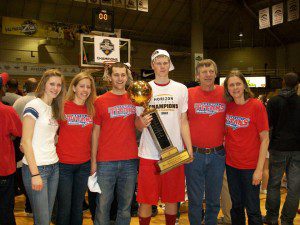 Evan Bruinsma stands with Rachel, Janet, William and his parents Henry and Margret with the 2012 Horizon League championship trophy. Evan currently is in his senior season at University of Detroit and is averaging 12.5 ppg and 7.7 rpg.

While many kids today have video games, an X-Box, Play Station, Nintendo and cable television, Margaret and Henry did not allow their kids to have these until much later in years.

“The only time they were allowed to have Game Boys was in the car and years later we allowed cable TV so they could watch sports,”  said Margaret.  “We wanted them to be active doing something rather than sitting around at home.”

Their philosophy could be summed up as the family that plays together stays together.  This meant that dating, for the most part, was secondary for the kids and social activities centered around friendships that the kids and parents made with their sports.

William spoke for all his brothers saying that he always loved to play basketball more than dancing at a prom.  Weekend sports would eliminate some of the school activities to which other kids would more quickly gravitate.

“We met a lot of nice people and both the kids and us parents developed friendships outside  of their backgrounds,” Henry said.

The accomplishments
What were the accomplishments for the Bruinsmas?
– All the kids received scholarships  for college.
– All  were captains for their teams including  three of them being captain in successive years.
– Most of the kids had great grade point averages well over 3.00 point in high school and college.
– Janet was a member of the state runner-up soccer team at WMC in 1998.
– William won two soccer state championships.
– Nate won two state soccer championships (2004, 2007) and a runner-up (2006)  plus a state championship in basketball (2008).
– Evan won three state basketball championships (2008, 2009, 2010); one state title in soccer (2008) and one runner-up soccer (2006).
– Rachel went to state for the high jump in her junior year (2012) and relays in her senior year (2013). She also helped her team to the regionals in basketball and volleyball for two years each.

The 15 years of going hither and yon for the family was hectic, but a wonderful experience for the parents.

“It was worth every bit of it, but it made it difficult for us as we went in different directions,” Henry said.

Scholarships were not the motivation for the parents.

“If parents today think that their kids will get scholarships from sports, they will be disappointed,” Henry said. “From what we have seen, there have only been four players who played AYBT or AAU who received scholarships.

“The Lord has really blessed us and it was a blessing from the Lord to give this to our kids,” Henry said.